Monday’s performances by The Voice’s Top 13 invited us to leave behind the shocks and disappointments of the Live Playoffs. But — I don’t know about you, but — my head was still spinning like a disco ball without an “off” switch. How did we possibly arrive at this stage of the competition without Michael Lee… Patrique Fortson… Kameron Marlowe? For that matter, how did we get here without Tyshawn Colquitt?!? (Yeah, I still couldn’t let that go.) It was as mystifying as it was dispiriting. So I settled in for the night hoping to forget all the questions without answers that were rattling around in my brain like Brynn Cartelli’s Season 14 winner’s single. If nothing else, I was pretty sure a few of the performances would be solid. Sarah Grace, for one, hadn’t let me down yet. Maybe this would even be the episode in which I figured out what Tyke James’ fans love so much about him (besides the rock-god hair of a lost Nelson brother). Did it happen? Read on… 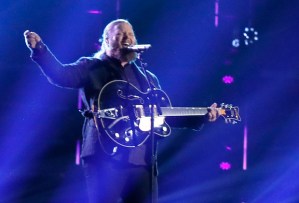 Chris Kroeze (Team Blake), “Let It Be” — Grade: B | Chris must have nerves of steel. Me, I’d have needed a new pair of pants just thinking about tackling the Beatles classic, never mind tackling it so soon after Kyla Jade brought down the house with her rendition. But maybe Chris’ calm stemmed from the fact that a) he was dedicating his performance to a missing child from his Wisconsin hometown, and b) he wasn’t trying to outdo the Fab Four or Kyla, he was just trying to do the Chris Kroeze version of “Let It Be.” Which was… ? For the most part, kinda laid-back; as you’d hope, stunningly sincere; and overall a fine showcase for his tangy, gravelly country-rock voice. The performance got less affective as the production got bigger, but for that a-cappella intro alone, Chris was already at a solid B.

Tyke James (Team Adam), “(Everything I Do) I Do It for You” — Grade: B- | After I expressed perhaps an excess of shock at Adam’s selection of Tyke to save in the Live Playoffs, I promised a commenter that I’d try to be nicer about the teen. So I’m going to start this review of his performance with the good: It was a bold choice to cover Bryan Adams with a ukulele — credit where it’s due: Adam’s idea — and the gamble paid off. The stripped-down arrangement lent a quirky charm to the version that Tyke dedicated to his mom, and helped elevate it from the realm of karaoke. What wasn’t so good about it? Tyke was a bit mumble-mouthed and occasionally sounded sorta wheezy. But this wasn’t in the slightest unpleasant. Hands down, the best performance we’ve gotten from Tyke. I actually liked it. 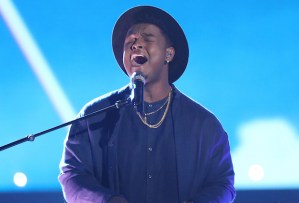 DeAndre Nico (Team Adam), “I Can Only Imagine” — Grade: A- | Can he get an amen? Why, yes, he can. A bunch of ’em, as a matter of fact. Going the spiritual route with a MercyMe cover — which he dedicated to his girlfriend, who he told us got pregnant during the Knockouts and lost the baby — DeAndre sang like the proverbial angel. One nice, round note after another rolled out of him until you couldn’t help but feel a little blessed to have gotten to listen. And, unlike Chris’ performance, which suffered somewhat when the music swelled, DeAndre’s only got better — his resonant voice rose above the band, all but demanding that the heavens open up for him. Or at least demanding that viewers vote for him. A real “Now that’s a star!” performance.

Kymberli Joye (Team Kelly), “Diamonds” — Grade: B | The sparse arrangement of Kymberli’s Riri cover, in particular at the start of the number (which she dedicated to her little sister), allowed us to really focus on the contestant’s voice, which was strong and beautiful in equal measure. Props to Kelly for recommending that Kymberli focus on those melancholy first notes to show her vulnerability — the gambit worked like a charm and really drew me in. As the song invited Kymberli to go bigger, that she did, unleashing the considerable full force of her voice. But she was a little pitchy on some of the more ginormous notes, which undermined the impact of the vocal explosion. So it was probably for the best that before her performance was through, she’d returned to the softer, more intimate tones that had been so irresistible. 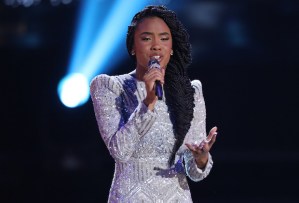 Kennedy Holmes (Team Jennifer), “Wind Beneath My Wings” — Grade: B+ | Jeepers. Bette Midler’s tear-soaked ballad is so overdone and treacly, it seemed to me like it was going to be hard — if even possible — for Kennedy not to come off like she was merely doing karaoke. But in the end, the youngster didn’t just pull off her dedication to her parents, she did it sounding for the most part like her vocals had been ripped right off of iTunes. Was it the most thrilling performance ever? No. But at least if it was karaoke, it was really good karaoke. Kennedy’s vocals were on point, and the kid has the poise and polish of an artist three times her age. Final Four or bust!

SandyRedd (Team Jennifer), “It’s So Hard to Say Goodbye to Yesterday” — Grade: A | I’m not crying, you’re crying! OK, maybe it was me sniffling — a little. But could ya blame me? SandyRedd wrung out of the Boyz II Men cover that she dedicated to her late mother every scintilla of emotion that was in it, loading each line with tears unshed and manipulating her memorably raw voice for maximum effect. I’m not entirely sure why she was dressed like a bride for her performance, but it didn’t really matter. She was freaking riveting to watch, amazing to hear. (That lower register of hers is out. Of. This. World.) Dunno how she managed to finish the number so perfectly, considering that toward the end, memories of her mom began to overtake her. Dazzling. 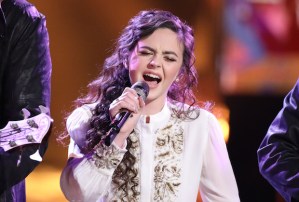 Chevel Shepherd (Team Kelly), “Little White Church” — Grade: B | Dedicating her number to her dad, Chevel took to this Little Big Town toe-tapper with the ease of someone born to play honky-tonks. And she packed a whole lotta sass into her voice — even here and there into her facial expressions. (She wasn’t giving Sarah Grace-caliber stank face or anything, but who except for Sarah Grace does?) However, what should have been a really fun performance still came off kinda stiff. Again, not vocally — Chevel was spot on in that regard. Maybe owing to her youth, she just didn’t have the stage presence (yet) of someone that makes you think she could get a stadium — or the Grand Ole Opry — on its feet.

MaKenzie Thomas (Team Jennifer), “I Am Changing” — Grade: B- | Before MaKenzie’s performance, which she dedicated to her coach, I worried that the song was going to ask her to go to Z vocally, and based on what I’d heard so far, she’d only be able to get to, say, X or Y. If that makes any sense? And in the moment of truth, MaKenzie sounded like a million bucks as JHud’s showstopper built up to its most massive notes, then… as I’d feared she would, she got a little pitchy. She landed some of the notes, but others, nope. They were just out of reach. And don’t think this is me being snarky either. I was rooting for her. And during the build-up, I thought she might actually stick the landing, so to speak. But her range doesn’t seem to be quite as sizable as her ambition. 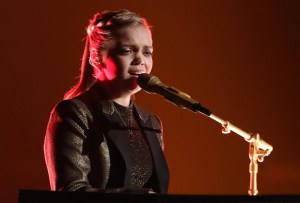 Sarah Grace (Team Kelly), “Goodbye Yellow Brick Road” — Grade: C+ | Remembering the disappointment that was Alexa Cappelli’s Season 14 rendition of the Elton John classic, I was torn about Sarah’s decision to dedicate the song to her performing-arts schoolmates. On one hand, my ears were scared; on the other, Sarah had never let me down before. On stage, ooo. Sarah started strong, singing like she was saying, “What, you thought I wasn’t gonna nail this? Get real.” But then, she hit more rough patches than I’d ever before heard her run into in a performance. It wasn’t a disaster by any means — some of the vocals were as lovely as Sara Bareilles’. But this wasn’t this Sarah’s finest moment overall. Maybe “Goodbye Yellow Brick Road” just needs to be taken out of rotation on The Voice.

Dave Fenley (Team Blake), “Hard to Love” — Grade: A- | The title of the Lee Brice number that Dave dedicated to his apparently-very-patient wife was pretty ironic, considering that if there was one thing Dave wasn’t, it was hard to love. And when the human teddy bear stepped behind the mic, he sounded, despite the gravel that gives his voice its distinctive rasp, like the equivalent of a hug: warm, affectionate, frankly delightful. Perhaps just as important, he looked and sounded like he was as at-home on that stage as a cowboy is on the range. Hopefully, his rock-solid performance will be enough to keep him out of danger Tuesday. (Considering that he had to be saved by his coach after the Playoffs vote, I can’t help but worry.)

Lynnea Moorer (Team Kelly), “Wolves” — Grade: C | From the outset, the Selena Gomez and Marshmello single that Lynnea dedicated to her incarcerated mother seemed like a good choice for the Comeback Stage winner. Especially with the chill arrangement that it was given, it played to her strength — that cooler-than-cool vibe that she gives off. But it also exposed one of her weaknesses: Where Selena explodes on the original, Lynnea sorta gently burst. And the hip aura that she exuded wasn’t enough to compensate for a performance that, aside from one biiig note, sat on the launchpad without ever really taking off. Is it worth mentioning that she spent as much time pitchy and/or flat as not?

Kirk Jay (Team Blake), “I’m Already There” — Grade: B+ | In rehearsal, Mr. “Country to the Day I Die” told us that he was dedicating his Lonestar cover to his mom, who’d never before gotten to hear him perform live. Well, she couldn’t have wound up in the audience on a much better night. When Kirk stepped into the spotlight, he looked and sounded like a guy who’d just arrived at the place he’d always belonged. There were slight pitch issues here and there, but on the whole, it was a winning performance. Some of those notes were so rich, they could’ve counted as dessert. Almost.

Reagan Strange (Team Adam), “You Say” — Grade: C | In rehearsal, Reagan told her coach that she was dedicating her song to her grandparents. (When she’d practiced in church not long ago, she’d reduced Gramps to tears, she added.) And there was no doubt in my mind that she had the pipes to slay it; I just wondered after the Live Playoffs whether she could get enough of a handle on her pitch issues to do so. Unfortunately, I was right to wonder. Reagan sang loud and clear… and off pitch throughout. Maybe she just couldn’t hear herself? The kid can clearly sing, but it’s not an ideal scenario if she sounds better in rehearsal than on stage.

So, which performance most wowed you? And which singers do you think are most at risk of getting the axe Tuesday? Vote in the polls below, then hit the comments.