Based on your comments following Monday’s recap of the performances by The Voice’s Top 13, you wouldn’t have minded if the show had sent packing just about all of the contestants — and me with ’em. (And people say I’m mean — da-amn!) Nonetheless, only two singers were played off on Tuesday. Before we found out which of the contenders they were, we of course had to sit through the usual results-show filler. 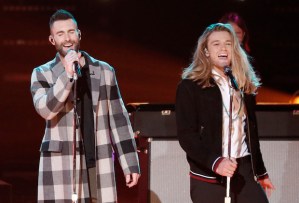 This time around, the hour was filled with clips of the singers receiving handwritten letters from their loved ones since they’d be away from home on Thanksgiving; a tepid performance of “Rhiannon” by Adam Levine and his team that featured some nice harmonies but, sadly, still little evidence that Tyke James or Reagan Strange could sing on key if their lives depended on it; a peek at Brynn Cartelli’s “Walk My Way” music video (which should’ve come out months ago, shouldn’t it? Shouldn’t we be on a new single from her by now?); and a Dolly-style performance of “I Will Also Love You” by Team Kelly that featured some stunning vocals by the coach, Kymberli Joye and Sarah Grace… and some other kinds of vocals by Lynnea Moorer and Chevel Shepherd (who I really would’ve expected to be better here).

Bottom Three
SandyRedd (Team Jennifer), “Believer” — Grade: C | Ugh. When the human hurricane landed in the bottom with Tyke and Lynnea, all I could do was sing that old Sesame Street song in my head: “One of these things is not like the others.” She’s got talent, polish, and she puts on a show. She just shouldn’t be in the bottom, especially after her performance Monday. Here, she was, as usual, a commanding presence on stage, but a lot of her vocals were swallowed up by the band. (And c’mon, sound mixer — it takes a lot to drown out SandyRedd! Get it together!) And those vocals that we did hear too often sounded more desperate and shouty than intense and effective. Not her best, but I still expected it to be better than her competition.

Tyke James (Team Adam), “Home” — Grade: D | I know I said I was gonna try and be nicer about Tyke, but I’m sorry, I just can’t. He performed most of his number like he had taken a double dose of Tylenol PM and was left singing pancake-flat in his sleep. Even Carson Daly couldn’t resist pointing out the irony of Tyke singing “Home” potentially moments before he got sent there. It was (past) time to put our ears out of their misery.

Lynnea Moorer (Team Kelly), “If I Ain’t Got You” — Grade: C- | The Comeback Stage must have looked better on paper than it sounded in practice. Even in what I figured (wrongly) had to be Lynnea’s last time singing on The Voice, she wasn’t able to bring anything to the stage that made me think it had been a mistake for her not to get a chair turn during the Blinds. And that big run that she attempted toward the end — operative word: attempted — was enough to make anybody flee. Who was voting for this performance? Kelly fans who just wanted to be loyal to Lynnea’s coach?

So, your reaction to the results? Which of Top 13 would you have sent home first? Vote in the poll below, then hit the comments.