This Is Us‘ Kevin went looking for answers in Vietnam, but in Tuesday’s episode, he unearthed one he didn’t expect: His girlfriend Zoe, played by Melanie Liburd, revealed that she’d been sexually abused by her father when she was a child.

Liburd tells TVLine that when she took the part, neither she nor the series’ writers knew that the character would be a survivor of abuse. “I knew she had a trouble childhood, but I didn’t realize it would be anything this heavy or dark,” she says. “It’s been so interesting to play. I think the writers were probably thinking, ‘What could we do?'”

Zoe’s announcement came as the character sat in a hotel bathtub, recovering from food poisoning and navigating the end of a fight with Justin Hartley’s Kevin. Liburd says that she tends to read scripts cover-to-cover (“and quite a few times”) upon getting them. And once she’d made her way through Episode 7, her excitement about the scene quickly was followed by another emotion: fear. 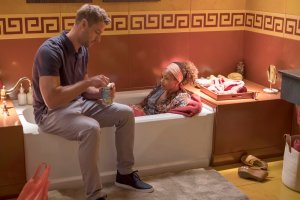 “Every now and then, a scene comes along where you think, ‘Wow, this is amazing,’ and then you say, ‘Oh my God, I’m actually terrified I have to do this,'” she says, laughing. “It’s such important subject matter, and with everything that’s happening right now, it’s so important to tell it the best way I can.”

To that end, Liburd spoke with several people who had suffered abuse and did as much research as possible on the topic. “Zoe is a character that never wanted what happened to her to define who she is, so it was just important to play like she knows that this has happened, has not told many people, but she doesn’t want to be seen as a victim,” the actress says. “She wants to be seen as this person that just wants to go on with her life and be happy. It was important for me to play it in that way.”

Which brings us to the final line of the scene: When a gobsmacked Kevin blurts out that Zoe has always seemed so strong, she matter-of-factly replies, “I am strong.”

“We played the scene in more of an emotional way, too, and I like the take that they chose, which was very sure, and she just wanted to get across what she wanted to get across,” Liburd says. “It was a lot for her to tell, and to really trust him in that way… I think it was very brave.”

And that bravery will bring Kevin and Zoe closer, Liburd previews, as they continue their Vietnamese fact-finding trip. “It’s the closeness that they needed, the final step. Zoe knew that she had to open up,” she adds. “He’s helping her to open up and learn to trust people… they complement each other.” She chuckles. “They’re having a grown-up relationship. It’s very free and loving.”