Midnight, Texas‘ Bobo Winthrop is a level-headed guy, but a giant glass shard lodged in your thigh is enough to put anyone on edge.

Regardless, even now that the Cartoon Saloon owner is aware that his love for Fiji Cavanaugh literally could kill him — as it nearly did during the aforementioned shower accident in last week’s episode —portrayer Dylan Bruce says his alter ego is ready to fight the good fight.

“I think he was in denial the first two episodes, but by Episode 3 and the shower scene, he’s trying to play it down, not to scare her,” Bruce tells TVLine. “At the same time, if you can defeat this powerful demon from the hellmouth, so why can’t we figure this out as well?” 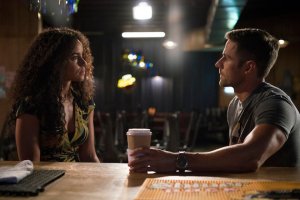 If you’re new to Midnight, a quick catch-up: Fiji (a witch) and Bobo (a human) had the hottest of slow-burn romances in Season 1, which culminated him her losing her virginity to him as a means to defeat the demon Colconnar, who threatened to destroy the sleepy Texas town. It was a whole thing. But when Bobo had a series of near-fatal accidents in Season 2, Fiji contacted her dead aunt (also a witch) and learned that their family had been cursed long ago: Any man who loved them would meet his end.

Fiji’s response to this heart-wrenching news? Dump Bobo for his own good, which she did by icing him out at the end of last week’s hour. But that doesn’t mean that Bobo will go away willingly.

“He really thinks that they can work together and figure it out,” Bruce says. “All he wants is for her to be honest with him.” At the same time, he can see Fiji’s side of things. “She just wants to keep him safe, and she’s probably the most powerful person in Midnight,” he adds. “She thinks she can do it.” 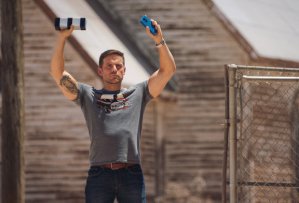 But don’t think that while Fiji’s rummaging around in her store for the perfect spell to make things right, Bobo is mopping away his breakup tears with a bar rag. As you can see in the photo at right, he goes all Say Anything on her in this Friday’s episode (NBC, 9/8c) via a cellphone and Bluetooth speaker. “I don’t think Peter Gabriel gave us the rights to his song, but we found another great song for it,” Bruce says. He also teases a “sweet,” magically infused scene between the pair in which Fiji is “desperately trying to do whatever she can to make Bobo forget about her, and you’ll have to see if it works or not.”

Meanwhile, the rest of the gang is involved in a cage-fight operation and helping a newcomer to town. As you do.

“There’s maybe a baby weretiger involved,” Bruce teases, chuckling. “It gets really action-y and cool and crazy on the other side of the spectrum of the episode.”