Jamie and Claire finally reach River Run in this week’s Outlander, and what they think will be a happy family reunion soon becomes something that makes Stephen Bonnet’s riverboat beat-down look like an amusement park ride.

Is it any wonder that Claire doesn’t think life on the Cape Fear plantation is the life for her? Read on for the highlights of “Do No Harm.” 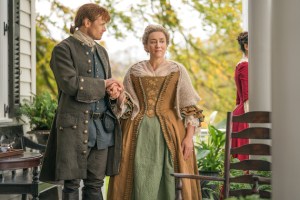 GIVE YER AUNTIE A HUG! | In the aftermath of Bonnet’s attack, Jamie broods on the boat. He laments that Lesley didn’t deserve a shallow grave on a riverbank, and he feels very stupid for trusting Bonnet. “I couldn’t defeat him when it mattered most,” he says, but Claire points out that her husband was outnumbered. Still, he’s not likely to get over it anytime soon.

Just then, they pull up in front of River Run, which is a rather grand plantation that makes Jamie feel his pennilessness even more. But Claire points out that he’s been poor before — like when they were married — and that they’re lucky they have family they can turn to.

Jocasta Cameron, Jamie’s maternal aunt, walks down to the dock to greet her guests. Jamie is a bit teary to see her; she can’t get over how much he’s grown since he was a boy. She tells Claire to call her “auntie,” because they’re related now. And when Young Ian goes to hand her some flowers he’s picked, they’re all confused as to why she doesn’t take them. After her butler Ulysses fills her in, she explains that she’s been blind for years — but her hearing is excellent.

SETTLING IN | In Inside, Jamie explains about the robbery. “Wicked! Just wicked to repay your kindness in such fashion!” Jocasta says, offering to let them stay for as long as they need. It becomes clear that she’s been keeping tabs on what Jamie’s been up to in France and Edinburgh, and she remarks how nice it will be to have a capable, smart man around the house for a while.

On the way up to their bedroom, Jamie marvels at how much Jocasta looks and sounds like his mother. But Claire is a bit subdued: She’s upset by slavery — because she’s an intelligent human being with a heart — but he reminds her that it will end eventually. Still, she’s not comfortable with River Run’s status quo. And her request to have slaves Mary and Phaedre call her by her first name doesn’t go unnoticed by Ulysses.

Meanwhile, down by the water, Jocasta’s pal John Quincy Myers and Young Ian get to know each other as they bathe Rollo, who’s run afoul of a skunk. Myers is a bit of a naturalist who educates the teen on the local Native American tribes. The lesson mainly concerns sex — “Indian lassies like their men hairy?” Ian squeaks — and violence. Regarding the latter, the teen reasons, “Indians dinna sound that much different from Highlanders.” (Sadly, this is the most Myers does in this episode: Though he’s the subject of a very public groin hernia surgery in the book, the TV show saves operations of any kind for a different character, which will become clear in a moment or two.)

CLAIRE SPEAKS HER MIND (SHOCKER!) | In Later, Jocasta goes on about how she considers the 150 or so slaves on her plantation as “friends,” and Claire canna stand it. There’s an edge to her voice when she asks Jocasta whether the slaves feel the same way, and the older woman doesn’t miss it. After Claire steps away to gather herbs with Phaedre, Jamie meets — and quickly ticks off — Jocasta’s friend Lt. Wolff during a discussion about agriculture.

While Phaedre pins one of Jocasta’s dresses to alter it for Claire, Mistress Cameron fishes for compliments about her home. The best Claire can come up with is that it’s “overwhelming” and “I haven’t stayed anywhere like it,” which the older woman realizes is a terrible cover for what her new niece is really thinking. Finally, Claire blurts out, “I don’t agree with keeping people as property,” which makes Jocasta think she’s a Quaker. “Jenny was right about you: You are a peculiar lass,” Jocasta says, adding how Jamie’s sister had written about how “spirited” and outspoken Claire was. “The same could be said about Jenny,” Claire says stiffly, which makes the older woman laugh. 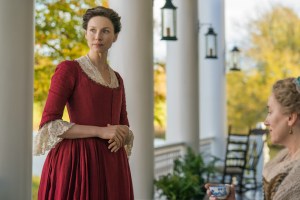 A MAJOR ANNOUNCEMENT | That evening, Jocasta throws a party so her neighbors can meet Claire and Jamie, and that’s where we meet Farquard Campbell, who fills Claire in how some locals who call themselves “Regulators” are giving the Crown a hard time by protesting taxes. But before Claire can be too outraged over British attitudes toward both the regulators and Native Americans, Jocasta starts clinking her glass because she’s got something to say.

“I am pleased to announce that I’ve decided to name my nephew, Jamie, as my heir,” she says. “It is my intention that Jamie should act as master of the estate immediately. I leave River Run in his hands.” This comes as a surprise to Jamie, a slap in the face to Lt. Wolff (who wanted to marry Jocasta, in part for her land) and a panic-inducing shock to Claire.

“I can’t own slaves, Jamie,” she says that night in their bedchamber, and he agrees. But the idea of being master of the house is kinda appealing to him — I mean, the guy lived in a cave for years! #DunbonnetNeverForget — and he posits the idea that maybe they can work to make all of the slaves free. But he won’t do it without her support… and she’s really not on board.

And when Jamie brings up the idea of liberating all of the home’s slaves and paying them, an outraged Campbell quickly points out how difficult and expensive the endeavor would be. Also? “You’ll put lives at risk, not least your own,” he warns. “The threat of harm won’t sway my mind, Mr. Campbell,” Jamie says, resolute. 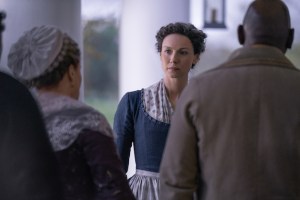 AND THEN THINGS GET REAL BAD | In Privately, Jamie and Claire discuss the possibility of taking Tryon’s offer and working the land with those he asks to join him in settling the wilderness. She’s not excited about that choice, either, given the whole Revolutionary War-bearing-down-on-them-soon-enough thing. But before they can hash it out more, an ashen Jocasta asks Jamie to see to a matter of bloodshed between one of her slaves and her overseer. Quickly, Claire grabs her medical kit and joins him.

When they get there, Jamie becomes aware that he’s going to have to aid Campbell in the legally decreed killing Rufus, the slave who spilled the white overseer’s blood by cutting off one of his ears. But the overseer has already exacted his revenge, spearing Rufus with a giant hook and having him strung up from a tree. Though it takes Jamie aiming guns at several people to do so, he and Claire eventually get Rufus down and brought back to the house for a little dining room-table surgery. She’s able to get the hook out safely, but Jocasta is apoplectic when she realizes that her nephew and niece have flaunted local law.

“Your error of judgement is grave, sir,” Wolff informs Jamie when he and Campbell arrive at the house, and it’s only through Jocasta’s quick pleading that the Frasers aren’t hauled off to jail for interfering with the law. Meanwhile, Rufus wakes up, confused as to why he’s being healed when he’s meant to die. Claire’s all, “Don’t worry about that right now,” then has him moved upstairs to her room. She runs into Ulysses while she’s cleaning up, and she can sense that he’s got something to say to her: “Saving that boy’s soul is all that can be done for him now. Once the overseers come, they will tear the limbs from his body… It would have been better for us all had he died on this hook.”

A TERRIBLE SOLUTION | In Upstairs, Jamie delivers the grim news: They’ve got until midnight to turn Rufus over to the authorities to be executed. Claire fights it, but Jamie realizes that there’s no other way. So as a torch-bearing mob gathers outside River Run and Jocasta fears the angry gathering will burn the house to the ground — I believe the way she puts it is, “Your wife’s foolishness will get us all killed!” — the Frasers decide to take drastic action.

“Isn’t it better to save his soul than to have those men tear it from his body?” Jamie asks. So Claire holds back tears as she tells Rufus she’s going to make a tea that will help him sleep. She pours a poison called aconite into the drink, then helps him swallow and holds his hand as he talks about his long-lost family. Jamie stands nearby.

By the stroke of midnight, Rufus is dead. Claire cries. Jamie crosses himself, prays over the body, and then carries the man’s corpse downstairs. The crowd doesn’t realize Rufus is dead as men drape a noose over his neck and literally drag him to the nearest tree, where they gleefully cheer as they hang him. From the porch, Claire and Jamie watch, horrified.