Late in Outlander‘s third season, I suggested that, given her history on the high seas, Claire Fraser should never set foot on a maritime vessel ever again. Sadly, I did not specify that riverboats were also off-limits, and now look where that’s landed us.

Indeed, the Season 4 premiere ends with a brutal attack on the Frasers while they sail downriver to meet up with Jamie’s aunt, Jocasta. But there’s a ton more stuff that happens before that, so let’s take a look at the highlights of “America the Beautiful.”

THE BENT-NECK HAYES-Y | As the episode opens, we watch a circle of standing stones being built on a hillside by people wearing furs. If I had to guess, I’d say the builders were Native American. At night, they dance in front of a fire as Claire voiceovers about how people have always attributed meaning to circles of various types, “and I, more than most, know full well just how a circle can affect one’s life, or death.”

Cut to a North Carolina town in 1767, about four months after the shipwreck, where Jamie wears a tricorn hat (not a bad look!) and bribes a guard to let him say goodbye to a prisoner who’s about to be hanged. Inside, Gavin Hayes awaits his fate among other men condemned to die. Jamie whispers that he’s planning to cause a ruckus and rescue Hayes when the hangman is distracted, but Hayes points out that he’s the one who slept with a married woman and wound up killing her husband — he won’t let Jamie put himself in danger on his account. As they share a drink, a blonde prisoner nearby asks for a swig of the flask. Before Jamie leaves, Hayes asks Jamie to be front and center during the hanging, because “I’d like the last face I look upon to be that of a friend.” Jamie clasps his hand and says he will.

Big Red then joins Fergus, Lesley and Claire (“THE KNITWEAR!,” I write in my notes. “WE GET IT!” responds every single person who’s ever read one of my Outlander recaps), who watch as the former Ardsmuir man is executed. Lesley, overcome, rushes the gallows; the distraction gives the other prisoners in line just enough time to try to make a break for it. The blonde man we saw earlier hucks a barrel at someone’s head, then scurries away to freedom.

Later, at a tavern, Jamie lays out a plan to dig Hayes’ grave after it gets dark. Lesley begins singing a mournful tune for his friend; eventually, Fergus, Marsali, Jamie, Young Ian, Claire and the other customers join in. (Side note: In the books, Jamie isn’t much of a singer, right? Holds his own here, though.) 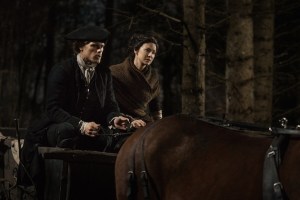 GEILLIS, BE GONE! | During the gravedigging later that evening, Young Ian freaks out as he has a flashback to Geillis soaking in her tub o’ blood. And although he’s clearly not OK, he’s hesitant to tell Jamie why. “Some ghosts can only be banished by speaking their name and foul deeds aloud,” his uncle says, looking at him like he’s a horse about to bolt. Then Jamie vaguely refers to how part of his recover from his rape involved sharing the “festering pain” with Claire. Ian haltingly tells Jamie that he wasn’t a virgin when Geillis forced him to come to bed, where “she made me do things, unspeakable things,” the boy says, starting to sob. Jamie — no stranger to both having and witnessing emotional outbursts at inopportune times — rushes over and hugs Ian, who wonders how he could have had sex with someone “without wishing to, and all the while it feels pleasing.” Jamie, speaking from experience, is very reassuring, explaining that biology and will are two different things and that all that matter is that Ian survived. Then Jamie notes that the grave is deep enough, and Ian hugs him. Well, that was a verra nice scene for the two of them.

When they go to grab Hayes’ corpse, they discover that the blonde prisoner who escaped has been hiding under a tarp with the body all day. And that’s how we formally meet Stephen Bonnet, a charming pirate, smuggler and murderer who wants Jamie & Co. to help him get past the soldiers at a checkpoint on the road ahead. If they hide him, “I won’t bother you again. You have my word,” Bonnet promises, and that cackling sound you just heard was every diehard Oldlander laughing with the utmost disbelief.

Jamie reluctantly agrees. Claire gives Bonnet some serious side-eye. So they bury Hayes and then take off, with Bonnet in the back of the wagon, all wrapped up like he’s a corpse. When they’re stopped by Redcoats, the soldiers stick Bonnet with a bayonet to verify Jamie’s story about transporting a dead friend, then let the Frasers go.

Later, they stop so Claire can tend to Bonnet’s wound. He’s very chatty: He notices she’s wearing two wedding bands, then he says he doesn’t fear the noose but DOES have a lifelong fear of drowning. “I know it’ll be the death of me,” he says. Jamie refuses any payment from Bonnet, then the pirate slips off into the night. 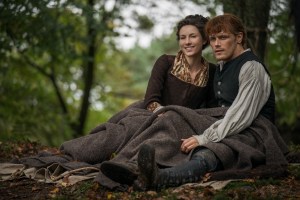 ‘THAT’S FAITH’ | Not wanting to around the soldiers’ suspicion by passing twice in the same night, the Frasers decide to camp out. They clean up by sponging each other off, the whole time whispering about how small a thing death is between them. “When my body dies, my soul will still be yours. Nothing is lost, Sassenach, only changed,” he tells her. “That’s the first law of thermodynamics,” she responds. “No,” he says, “that’s faith.”

All of this undying love has fired up Claire’s lady kiln, and before you can say, “Wait… this isn’t the riverbank scene,” she’s straddling him. They make love by the campfire, and though it’s tough to tell with all the rocking and thrusting, it seems like both of their trains arrive on time, if you know what I mean. And before I mix more metaphors, let’s move on, shall we?

AN OFFER HE CAN’T REFUSE | It seems that Mr. and Mrs. Fraser want to return to Scotland, but the only way they’ll be able to do so is if they sell a gem they salvaged from the wreck of the Artemis. Jamie has the stone set in gold so Claire can show it off around her neck at a fancy dinner they’re scheduled to attend; the ruby eventually sells.

After dinner, Gov. Tryon makes Jamie an offer: A whole heck of a lot of free land in North Carolina can be his — as long as he’ll swear an oath to the King. Though Jamie has already made such a pledge as a pardoned Jacobite, he tells Claire he’s still planning to go back to Scotland. After all, since Lord John withdrew the warrant for his arrest, “I’m no longer a wanted man.” (Somewhere, Lord John cries, “You’re still wanted by meeeeeee!”)

But Claire sees through the offer to what the governor is really after: He’s looking for the “loyalty and obligation of an experienced soldier,” which will come in handy now that a local group calling itself the Regulators are starting to protest Tryon’s tax collectors. Plus, knowing what she and Jamie know, he’ll be expected to fight for the British when the Revolution gets underway… and the Brits will lose, which means Jamie could lose his land.

Still, Jamie thinks, “If there’s a bit I can do to make this a good land for Brianna, if my presence here now can be felt by her later, then that would be something.” Claire agrees it would. 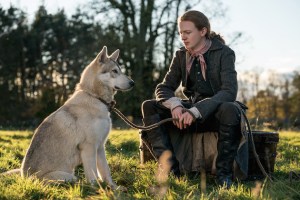 STAYING PUT | So the next morning, Claire and Jamie announce to Fergus, Marsali, Young Ian and Lesley that they’re planning to stay in the colonies. Ian is excited… until he learns that his uncle still plans to ship him back to his parents ASAP. Lesley asks if he can continue traveling with MacDubh and his wife, because “my place is by your side.” Aww. And then a very giggly Fergus says he and Marsali aren’t going anywhere, either, because she’s having a baby! Everyone smiles and hugs and yay!

So Jamie, Claire, Lesley and Ian — along with Rollo, a wolf-dog he won gambling — set out on a riverboat headed toward Aunt Jocasta’s plantation River Run. During the slow journey, Jamie gives Claire an medical kit he bought in town; she loves it. He laments that he hasn’t been able to give her more than a ring and his mother’s pearls. And I should probably mention that Claire says the ring is all she needs… because she’s about to lose it.

While they’re docked for the evening and asleep, Bonnet and his men board the boat. They beat up Jamie. Bonnet kills Lesley. Claire is ordered to surrender her rings, which she tries to thwart by swallowing them. But Bonnet pries her mouth open and takes the ring Jamie gave her.

As the violent scene continues, the natural sound falls away, replaced by Ray Charles’ cover of “America the Beautiful” on the soundtrack. When Jamie is finally released and the pirates take off, he staggers back into the cabin to find Claire weeping and spitting out her gold ring, Lesley dead beside her.