Well, that was a fun little blast from the past, wasn’t it?

The dream of the ’90s was alive on Riverdale this week, as we flashed back to when the teens’ parents were students at Riverdale High, when “phones had cords, Winona had Johnny and everything smelled like teen spirit.” Alice was a badass Serpent chick, F.P. was a clean-cut football player, Fred still dreamed of a music career… and they all ended up in Saturday detention together, where they bonded over games of Gryphons and Gargoyles. Yep, the same role-playing game that’s causing all those problems in current-day Riverdale. 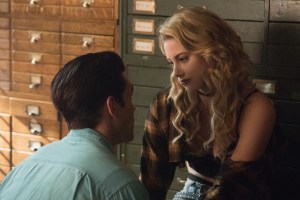 It was a lot of fun to see Riverdale‘s young cast play their parents — how about KJ Apa’s dead-on Luke Perry impression, huh? — but it was even more fun to see all the surprising hookups we never knew about before. Alice and Fred kissed! Sierra and Tom Keller were high school sweethearts! Even F.P. and Hermione shared an intimate moment. Those fleeting glimpses of teenage passion may have just been “stolen moments,” executive producer Roberto Aguirre-Sacasa tells TVLine… but “it’s very rare on Riverdale that stuff like that happens and it doesn’t come back to haunt us in some way.”

Speaking of haunting, the episode also threw in another one of its signature horror-movie nods when a drugged-up Fred and Sierra took the stage to sing the Dokken rocker “Dream Warriors,” from A Nightmare on Elm Street 3. Aguirre-Sacasa admits that one was actually his idea: “I love the Nightmare on Elm Street movies, and to me, ‘Dream Warriors’ is one of the cheesiest, most wonderful theme songs… when I brought it up in the room, people either were excited or pretended to be excited, even though they secretly thought I was insane.” 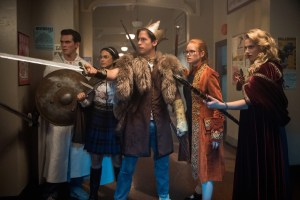 We’ve seen the very weird effect that Gryphons and Gargoyles has on everyone who plays it, and that extended to the ’90s teens, with the gang donning costumes to act out their characters and Alice having a vision of the Gargoyle King during one late-night gaming session. It’s not quite supernatural, though, the EP insists: “One of our inspirations for this season is True Detective Season 1, which flirted with the supernatural, but really dealt with the occult, and ritualistic murders… so we’re flirting with the supernatural, but we’re not quite there yet.”

Back in the present day, Betty discovered to her horror that Jughead is a newly devout convert to Gryphons and Gargoyles, obsessively playing in Dilton’s bunker with Cheryl and Toni. “Jughead is definitely immersed in the world of the game,” Aguirre-Sacasa teases, but don’t expect his new hobby to drive a permanent wedge between him and Betty. “We’ve kind of committed this year that they would not spend so much time apart… they’re going to be drawn together sooner rather than later.”

There’s still the matter of the Gargoyle King, though… and the unsolved murder of Principal Featherhead, played in the flashbacks by ’80s teen movie staple Anthony Michael Hall. (After his death, the parents made a pact to never speak of G&G again.) The Gargoyle King is “definitely our Big Bad” this season, the EP hints, “and he keeps rearing his ugly head and branch arms” throughout the rest of Season 3. As for Principal Featherhead’s mysterious demise, it does tie in to the current mystery, and “we will reveal who did it,” he promises.