We all turned back our clocks this past weekend, and now this Wednesday’s Riverdale (The CW, 8/7c) is turning back the clock, too… all the way back to the 1990s.

Season 3’s long-awaited flashback episode, titled “The Midnight Club,” sees Riverdale‘s young cast playing their on-screen parents back when they were students at Riverdale High. The writers have been talking about doing a flashback episode “since the beginning of Season 1,” executive producer Roberto Aguirre-Sacasa tells TVLine, but “we wanted it to have real stakes and real meat to it, and be an essential part of the season.” In the episode, Alice confesses to Betty that the Riverdale parents have their own connection to the role-playing game Gryphons and Gargoyles, which led to “an incident that happened in their high school youth,” Aguirre-Sacasa teases, and “ties them to the mystery in the present.” 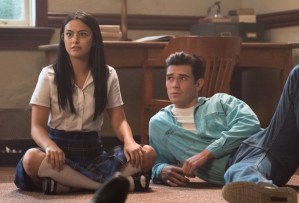 Naturally, the young actors “had a blast” filming the episode, with KJ Apa breaking out his “uncanny” impression of on-screen dad Luke Perry. (“He’s sort of known throughout the land for his imitation of Luke,” the EP reveals.) Some of them even did research: Lili Reinhart “really looked at and studied Mädchen [Amick]’s look from Twin Peaks,” he says, and Cole Sprouse “did study Skeet [Ulrich]’s mannerisms in those ’90s horror movies.” But it was also a welcome change for the cast to all share the screen at the same time: “They aren’t always in scenes together, so I think it’s nice for them to spend a lot of this episode in group scenes… it’s very, very rare for that to happen.”

The episode is packed with fun ’90s fashions (flannel shirts!) and references (Johnny Depp dating Winona Ryder!), but also boasts a soundtrack of ’80s classics — including a very special musical performance from the high schoolers. Technically, the flashback scenes are set in the year 1992, Aguirre-Sacasa says… “but like many things on our show, we keep it vague and timeless.”