Veronica’s speakeasy finally opens its doors this week on Riverdale — and Betty and Jughead try to open a door to the past that their parents want to keep shut.

Drowning in bills, Veronica worries about how she’s going to keep Pop’s afloat, but confesses to Betty that she hasn’t unveiled the speakeasy yet because she was waiting for Archie to get out first. Betty prods her to open it up anyway, and it does look pretty great: Veronica calls it La Bonne Nuit (ooh la la!) and recruits Reggie to tend bar (mocktails only, of course), Josie to sing and Kevin to emcee. But before she can even get started, she gets a visit from Penny Peabody “offering” protection from the Ghoulies for “a modest price,” and another from Sheriff Minetta asking for a “donation” to the sheriff’s department. Oh, and when Veronica says no, Penny tries to frame her by sending a massive shipment of Jingle Jangle to the bar. 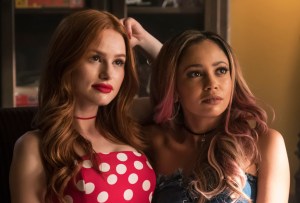 Veronica turns to Cheryl and Toni for help, who tell her that the Ghoulies have transformed the Whyte Wyrm’s basement into a Jingle Jangle lab. So they sneak in and snap a few pics, and Veronica takes them to her dear daddy Hiram, who she knows is behind all this, vowing to send them to the FBI if he doesn’t back off. (She also demands 10 grand a week from him… because why not?) On her big opening night, Josie takes the stage in a slinky dress to sing “Anything Goes,” and Hiram shows up, tail between his legs, with a peace offering: a massive oil painting of Veronica to put up in the speakeasy. He doesn’t mind if she goes to the feds, though; the Ghoulies have already packed up their drug lab and set up shop elsewhere. 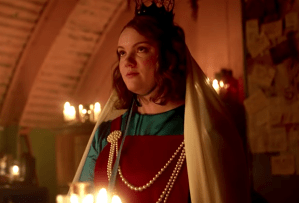 LET’S PLAY | Betty and Jughead are still digging around to find the truth about Dilton and Ben’s deaths, and want to see a rule book to this Gryphons and Gargoyles game, which leads them back to Ethel. She invites Jughead to Dilton’s bunker, where she’s lit dozens of candles and donned a crown and veil for Jughead’s official G&G initiation. He opts to play as a Hellcaster (that was Ben’s choice, too!) and gets to the point where Ethel presents him with a choice of two chalices to drink from. Since Ethel promises to show him the rule book if he takes a swig, he does — and his lips turn blue, but he’s otherwise OK. He gets his hands on “the King’s Scripture,” as Ethel calls it… but while he’s paging through it, she chugs what’s in the other chalice, and Jughead has to rush her to the hospital.

Betty starts to suspect that her mom’s new obsession The Farm might be connected to G&G, and buddies up to Edgar’s daughter Evelyn in an effort to learn more. But during a group meeting at the Cooper home, Betty is encouraged to offer her first “testimony,” i.e., confess to everything bad she’s ever done. Alice has done it, including everything that happened with Chic and the dead body… and her own teen experience with Gryphons and Gargoyles. Later, when F.P. discovers Jughead’s rule book, he explodes on him and tosses it into the fire, warning him that “this game is pure evil.” He’s too late, though: Ethel already made copies and put them in every locker in school… to summon a fresh wave of recruits for her Gargoyle King. 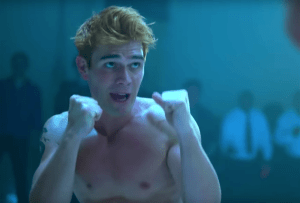 BOXED IN | Meanwhile, Riverdale keeps coming up with fresh ways to get Archie to take his shirt off, as the redhead is forced to take part in an underground bare-knuckle fighting ring, trading punches with inmates from other facilities for the amusement of the wardens and guards. Archie, of course, is great at this, and after knocking out his first opponent with just one punch, learns that “winners get perks” and earns a special lunch delivery from Pop’s that he shares with his fellow fighters. He might be too great at this, though: The warden warns him to “give them a show” and make his next fight last a little longer, so Archie takes a pummeling — not his beautiful face! — before finishing off his next victim. He’s still looking for a way out… and finds one when he discovers a rock hammer hidden inside Mad Dog’s old copy of The Count of Monte Cristo. Prison break, anyone?

* Yes, that was the Archies’ “Jingle Jangle” playing when Veronica, Cheryl and Toni raided the Ghoulies’ drug lab. Somebody was ingesting something when they came up with this one:

* Kevin’s old flame Joaquin is in juvie with Archie, and was the first one to volunteer when Archie suggested they escape. If the Moose thing doesn’t work out, Kevin, you may have a fallback option soon enough.