Riverdale‘s Betty and Jughead dug deep into the “Gargoyle King” mystery this week, while Archie adjusted to his new life stuck behind bars with a bunch of sweaty dudes. 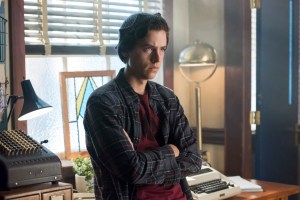 It just wouldn’t be Riverdale without a murder for Betty and Jughead to investigate, and they’ve got a juicy one now after Jughead discovers Dilton dead and his pal Ben Button barely alive in front of a ritualistic shrine featuring a True Detective-esque skeleton made of animal bones. He calls in Betty for some good old-fashioned sleuthing, and at the coroner’s, they learn that Dilton died from ingesting blueberry-flavored cyanide, and had some weird cryptic symbols carved into his back, too. (Quick, get that Nancy Drew code book!) They get a clue when Ben’s mom tells them Ethel stopped by his hospital room to drop off a creepy talisman… just as they learn that a kid from Dilton’s scout troop has gone missing.

They confront Ethel, who confesses she’s dating Ben and spent the summer in Dilton’s secret bunker in the woods. Betty and Jughead head into the woods to find the bunker, but cut their search short when they encounter a living, breathing, blood-spattered version of that creepy skeleton coming at them. It matches Dilton’s drawing of the “Gargoyle King,” and when they search his bunker, they find a role-playing game there called Gryphons and Gargoyles. They find chalices with cyanide in them, too… along with the missing kid, who was Dilton’s “apprentice” in the game and refers to Ethel as “Princess Etheline.” They threaten Ethel that they’ll take all this to the sheriff, but she warns if they do, “he’s going to get very, very angry” — and then lapses into a violent seizure. Back at the hospital, Betty and Jughead find Ben posed on a windowsill, spouting gibberish about “the Kingdom” before tumbling out to his death. 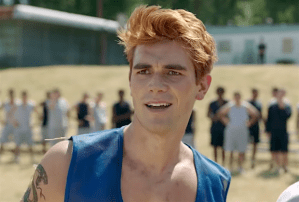 Archie, meanwhile, has a rough time adjusting to juvie, bunking with a pleasant chap named “Mad Dog” and getting beaten up by a gang of Ghoulies. (He turns down an offer of protection from the Serpents — and Joaquin! — when they ask him to shank a Ghoulie.) “Mad Dog” is actually a nice guy, though, and Archie convinces his fellow inmates to play some football in the yard, dangling his fresh new sneakers as a prize for the top player. Veronica gives him a morale boost by bringing Josie and the River Vixens to perform “Jailhouse Rock” right outside the fence while Archie and the boys play. But after a nod from Hiram, the corrupt warden cracks down on the game, leading to a full-scale riot, with prison guards clubbing Archie and the inmates silly. Later, they tell Archie that “Mad Dog” died in the riot “that you started.” (Cool, a cell all to myself!) Archie confronts the warden, who is pleased with Archie’s spunk and eager to mold him into “my new ‘Mad Dog.'”

Elsewhere in “Fortune and Men’s Eyes”: The parents had a secret meeting about Dilton’s death, and how it ties into a secret in their past (“We made a pact to never mention that night”); Betty’s vision of Polly’s twins floating over a fire was revealed to just be a hallucination (we think); Kevin joined the ROTC to spend more time with Moose, who’s been distant ever since school started; Cheryl took advantage of Archie’s absence to seize the class presidency; and we met Evelyn Evernever (Orphan Black‘s Zoe de Grand Maison), the daughter of The Farm’s leader Edgar Evernever… who seems like a real troublemaker, doesn’t she? (Was Ethel’s seizure her doing?)