A falsely accused Archie learned his fate as Riverdale returned for Season 3… but really, that was just the tip of the WTF iceberg.

Let’s start with Archie, who spent his summer in a sweltering courthouse — can we get some central air up in here, please? — on trial for the murder of Shadow Lake townie Cassidy. (Remember, Hiram’s bodyguard Andre was actually the one who pulled the trigger, but Hiram framed Archie for the crime.) The prosecutor Ms. Wright labels Archie “a cold-blooded killer” in her closing statement, but Archie’s mom Mary defends her son, pointing out the utter lack of physical evidence. As the jury deliberates, Sierra McCoy says Archie’s chances of acquittal are “50-50.” So when the judge says they’ll reconvene after the Labor Day weekend, Archie doesn’t want to waste what could be his last days of freedom worrying about jail. He wants to swim! (Shirtless, of course.) 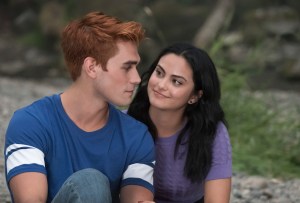 He and Veronica, Jughead and Betty all pile into his newly souped-up jalopy and head to the Sweetwater swimming hole for a little R&R. In front of a roaring campfire, Jughead suggests Archie could just make a run for it. But Archie is ready to face the music: “I didn’t kill anyone… but I could’ve. I have to take responsibility for that.” (Huh? So go to prison for the rest of your life because you could’ve killed someone? OK, Mr. Boy Scout.) When they return to court, the jury announces they’re deadlocked and can’t reach a verdict. To avoid a costly retrial, Ms. Wright offers a deal of two years in juvenile detention if Archie pleads guilty to manslaughter — and before his mom can stop him, Archie takes it!

Veronica sobs as Archie is led away in handcuffs and put on a bus headed straight to juvie. So is Riverdale really putting its main character behind bars all the way through graduation? Even if it does, there are at least two stranger plot developments we have to discuss in the Riverdale premiere… 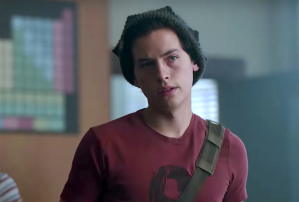 ALL HAIL THE GARGOYLE KING | Jughead’s got a few non-Archie problems to deal with. First, he has another nasty run-in with the Ghoulies when the rival gang snatches his dog Hot Dog. (Hands off the mutt, jerks!) He leads a rescue mission and retrieves his pooch after Cheryl plugs a Ghoulie in the shoulder with an arrow — yeah, Archer Cheryl! — but Penny Peabody ominously warns him that “you just made the North Side fair game.” That’s not even the scariest thing he encounters this week, though. Dilton has become obsessed with some weird role-playing game, and shows up at Jughead’s trailer rambling about a “Gargoyle King.” Then when Dilton goes missing, Jughead finds a drawing of a strange skeleton-like creature and a map that leads him to a foggy field where Dilton and a friend are stripped down and unconscious in front of a creepy shrine, with the friend coughing up green bile. Step aside, the Black Hood: The Gargoyle King is officially Season 3’s big mystery… 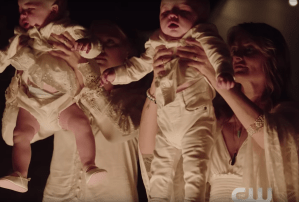 ALICE BOUGHT THE FARM | … unless the real mystery is what the heck is going on at The Farm, the cult sorry, commune that Betty’s sister Polly has roped her mom Alice into joining. Alice has suddenly turned into a blissed-out hippie, wearing flowing blouses and constantly offering Betty advice from The Farm’s leader Edgar Evernever (!). Betty bristles at all the Farm talk, but when Polly discovers she’s been lying about going to a therapist and forging prescriptions to get more Adderall, Betty takes a hard look at herself and vows to dial back her pill consumption. One night, though, she wakes up and peers outside to see Polly and Alice holding Polly’s twin babies over a roaring fire in some bizarre ritual… and then they let go! And the babies float! Betty collapses to the ground in a violent seizure — and either she’s having serious withdrawal hallucinations, or Edgar’s teachings are way more powerful than we thought.

* Veronica has officially declared war on Hiram, now that his plot to separate her from Archie was a success. After Archie pled guilty, Hiram admitted that he did all of this to punish her: “You chose that boy over blood.” In return, she told him she’s not his daughter anymore. (But you’ll still pay my credit card bill, right, Daddy?)

* I still can’t figure Hermione out. After Veronica got caught trying to tamper with a juror on Archie’s trial, Hermione chewed her out and defended herself when Veronica attacked her for not standing up to Hiram: “I’m a prisoner, Veronica, but I am not his puppet.” Huh? So is she a badass crime boss, or a helpless battered wife? Pick one already!

* Nice to see Cheryl happy again and back “in the mood for some hell raising.” She threw a killer “end of summer” party, didn’t she?

* The summer fling between Josie and Sweet Pea is certainly intriguing, even though she wants to drop him to concentrate on her music. Anything to get Josie more screentime, I say.

* Kevin tried to make a pact with Moose to lose his virginity by Halloween — which, if my calendar is correct, is coming up fast!

* If Archie is such a danger to society, why would the judge let him go on an unsupervised road trip while the jury was deliberating?

* Where does Edgar Evernever rank on the scale of ridiculous Riverdale character names: above or below Poppa Poutine?

Alright, Riverdale fans: How’d you like tonight’s premiere? Grade it in our poll, and then grab a booth in the comments below and share your thoughts.