Acosta began by asking Trump about the migrant caravan that is currently making its way to the United States-Mexico border from Central America. When Acosta asked if Trump might be “demonizing” immigrants with his rhetoric and controversial campaign ads, Trump suggested, “I think you should let me run the country. You run CNN. And if you did it well, your ratings would be much better.” 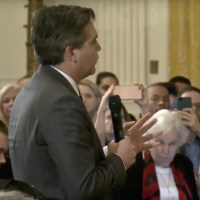 Though Trump tried to shut down Acosta’s attempts at a follow-up — “That’s enough,” he said repeatedly, walking away from the microphone several times — Acosta did get in a second question about potential upcoming indictments in the Russia investigation.

“I’m not concerned about anything with the Russia investigation, because it’s a hoax. That’s enough. Put down the mic,” Trump said. “CNN should be ashamed of itself, having you working for them. You are a rude, terrible person. You shouldn’t be working for CNN. You’re a very rude person. The way you treat Sarah Huckabee is horrible, and the way you treat other people is horrible. You shouldn’t treat people that way.”

NBC News correspondent Peter Alexander chimed in to defend Acosta, calling him “a diligent reporter who busts his butt like the rest of us,” to which Trump responded, “Well, I’m not a big fan of yours, either, to be honest with you.”

Acosta then stood again to push back against Trump, referencing the pipe bombs that were recently sent to CNN’s offices. But Trump doubled down on his insults, saying, “When you report fake news, which CNN does a lot, you are the enemy of the people.”

UPDATE: CNN has since responded to Trump’s comments, calling them “not only dangerous, [but] disturbingly un-American.” Read the network’s full statement below:

Watch the exchange between Trump and Acosta in the embedded video below, then hit the comments with your reactions.