Fuller House will re-open its doors just in time for the holidays — on Friday, Dec. 14, it has been announced by the Netflix series’ cast in the video embedded below. Netflix also released a quarter of distinctly fun photos, including a quite festive family pic and one that positions the girls as Charlie’s Angels.

Fuller House‘s fourth season finale, which features an appearance by American Horror Story scene stealer Leslie Grossman (as a dc at the hospital where Kimmy is due to give birth), was filmed in early September. Season 4’s roster of guest stars also includes Maria Canals-Barrera (Cristela) as Fernando’s mother; Lee Majors (The Six Million Dollar Man) and Lindsay Wagner (The Bionic Woman) as a pair of retired detectives; and Josh Peck (Grandfathered) as a hipster dad Jesse meets at a daddy-and-me group for baby Pamela. 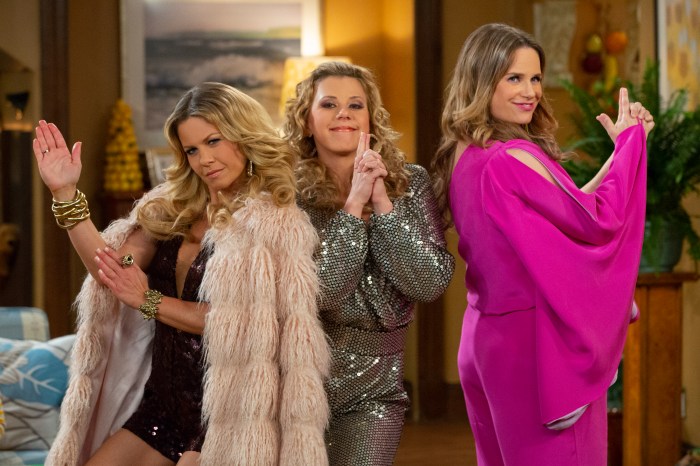 Between its third and fourth seasons, Fuller House also underwent a behind-the-scenes shake-up. Series creator Jeff Franklin was fired as showrunner over allegations of inappropriate behavior, a turn of events that left him “heartbroken,” according to an Instagram post. Franklin was replaced by Steve Baldikoski and Bryan Behar, who have served as co-executive producers since Fuller House premiered in 2016.

As for the series’ larger fate, there have been rumblings that Season 4 will mark the end, though a Netflix spokesperson told TVLine earlier this month, “No decision has been made about the future of Fuller House.”