This week on The Conners, Johnny Galecki reprises his role as David, and brings with him his “crayon” of a girlfriend Blue, played by former Christmas Vacation sister Juliette Lewis. Becky, meanwhile, takes on a second job.

The episode opens on a parent-teacher conference. Darlene is waiting patiently with Mark’s teacher, Ms. Reynolds (Living Biblically‘s Lindsey Kraft), while David parks his car. He then enters with Blue, who makes quite the first impression. She bows down to Ms. Reynolds and salutes her as “a member of the noblest profession,” then introduces herself to Darlene, who wasn’t expecting her. Once seated, Blue points out that she’s only ever met Mark twice, but feels like she’s known him forever. Ms. Reynolds proceeds to tell Mark’s ‘rents that he’s adjusting well to his new class, though it’s a struggle to keep him challenged. David says he can work on that while Mark and Harris spend the weekend at his place, but Darlene never agreed to that. David explains to his estranged wife that he’s trying to make up for lost time, and Blue assures Darlene that she has nothing to worry about. “I lived on a weed commune,” she says, “where we all shared in the raising of the children.” Darlene, who simply can’t help herself, suggests that everyone on Blue’s commune was too high to notice whose kid was whose.

David arrives to the Conner household that weekend to retrieve the kids. After catching up with a frazzled Jackie, he mentions to Darlene how strange it is to be back now that Roseanne’s gone. “You were the daughter she always wanted,” Darlene quips. She then asks David if he’s told Blue that they slept together, which he has not. He explains to Darlene that he’s happy now. He thinks he’s found his soulmate and doesn’t want anything to get in the way of that. Darlene is clearly surprised to hear David use the word “soulmate,” but doesn’t say anything. 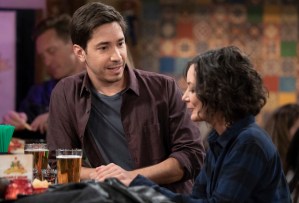 Later that night, she heads out to La Casita Bonita with Jackie to cop free drinks while Becky bartends. She admits to them that she’s uncomfortable that Blue’s currently “playing house” with Mark and Harris, then Becky tells her sister that it’s time to move on and find herself a new man. Darlene’s not exactly keen on the idea, but her mood changes immediately when she’s approached by the nebbish Neil (New Girl‘s Justin Long), who offers to buy her a drink. After he makes a fool of himself discussing potential gin-and-tonic combinations, Darlene cuts right to the chase and asks if he’s hoping their banter leads to sex. That’s exactly what happens, and we next see Darlene the following morning as she returns home from her one-night stand, only for David to sneak up from behind on the front porch.

Inside, David tells Darlene that something’s happened. Harris had a boy over, and they had sex. Darlene is flummoxed, unsure how David let this happen. Turns out he was at work, leaving Blue unsupervised with the kids. A furious Darlene heads over to David’s place to confront Blue, who tells Darlene that she had a talk with Harris before her friend came over, and knew the teenager was going to have sex. Darlene’s head just about explodes, and she comes at Blue, calling her a “crystal-licking, patchouli-smelling, hippie bitch.” David runs in to break up whatever’s about to transpire, then Blue suggests that it’s time for Darlene to leave. During the car ride home, Darlene has a talk with Harris. She just wants to know that her daughter’s OK, and assures Harris that she can come to her about anything. Harris tells Mom that she hasn’t heard back from her, um, gentleman caller just yet, and needs to go to the pharmacy to get a morning-after pill.

David returns to the Conner house later that evening, where he and Darlene sit down to discuss what happened. Darlene is no longer fuming, but makes clear that the kids can no longer stay with him unless he’s going to be home. David agrees, but tells Darlene that Blue is going to be involved in the kids’ lives. Once that’s settled, Darlene says there’s one more thing they need to discuss: Now that things are getting serious with Blue, it’s time for them to finalize their divorce. They admit it’ll be weird not being married to each other, but it’s time. Darlene then receives a text from Neil, asking if she’d like to go out Friday night. When David asks if things are serious between them, Darlene mocks her soon-to-be former hubby, saying she thinks she’s found her soulmate. They share a laugh, then a sadness washes over them as they accept that relationship has reached its end. David touches Darlene’s arm, then heads upstairs to say goodnight to Mark and Harris. 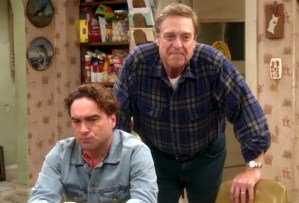 The B-story centers on Becky. She heads out to the garage to retrieve a beer, where Dan and D.J. are working away on a motorcycle. Dan tells D.J. that he and his drywall crew could use an extra set of hands, but D.J. makes clear that he’s slammed at his new job, working as a vending machine servicer. That’s when Becky throws her hat into the ring and asks Dad to give her a shot. She can use the extra cash to save up for a mortgage on a fancy mobile home. (Guess she had to sell the previous trailer when Mark died?)

On her first day, Becky shows up to the construction site with a water bottle full of vodka. Dan catches on immediately, and points out to Becky that it’s only 6:30 in the morning. He reprimands his daughter for being irresponsible, and says he has a zero tolerance policy when it comes to alcohol; if she suffers an accident on the job, he can lose his license. In a follow-up scene, Becky visits Dan back in the garage and admits that she can’t go a whole day without drinking. He agrees to give her six weeks to get her act together, and if she still doesn’t have her drinking under control, he’ll have no choice but to fire her.

What did you think of The Conners Season 1, Episode 2? Hit the comments with your reactions! (Looking for our next recap? Read about Episode 3 here.)