Johnny Galecki’s David is back in Lanford, but is he here to stay?

On this week’s Roseanne, Harris receives a text from her father letting her know that he’s back in town for her birthday. He’s been absent for much of her life, having only showed up a handful of times back in Chicago. We’re told he’s spent the last few years traversing the globe, building homes for those in need. Roseanne has kept in touch, but Dan has written David off for abandoning his wife and kids.

David arrives at the house later that night, by way of Darlene’s window. He tells his estranged wife that he’s ready to do right by her and the kids. He hands her a newly signed lease and says he’s moving back to Lanford to fix things before it’s too late. He then casually mentions that he’s seeing someone: a woman whose honest-to-god name is… Blue. 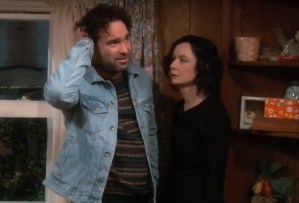 Darlene barely has a chance to react before David says how much Blue has taught him about himself. He was in denial, thinking Mark and Harris were better off without him, and selfish for stringing Darlene along. Distraught, Darlene asks how serious things are with Blue. He says she won’t let them “merge their spiritual paths” until the estranged marrieds sign divorce papers, but Darlene isn’t ready to give up on what they have. She kisses him, and the two wind up in bed together.

The next morning, David explains why he took off, and how he tried to justify it: “When I left you and the kids, I rationalized that it was OK because I was helping people. The truth is, I left because my brother died and I was overwhelmed with all the responsibility.” Darlene is happy that he’s finally being honest, but insists he skedaddle before Dan wakes up. David maintains he’s coming to Harris’ party no matter how his father-in-law reacts, and Darlene mocks him for asserting himself. He tells her to stop belittling him, and she fires back by insisting he’s too sensitive. It’s a fight they’ve had ever since they were teenagers, and one of the many reasons their marriage doesn’t work. Neither of them wants to admit it, though. 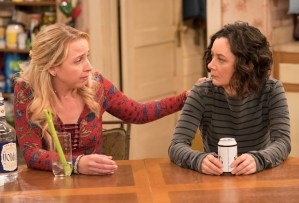 Later that evening, Darlene tells Becky and Roseanne that she and David are getting back together. Roseanne says it’s a terrible idea, and reveals the real reason David left was because they were fighting all the time. Becky also weighs in, telling her sister that she loves her brother-in-law, but the marriage died years ago and it’s time to move on.

David, meanwhile, is out on the porch, waiting for a text from Darlene telling him it’s OK to come in. Harris comes up behind him, and he can’t wait to tell her that he and Mom are trying to work things out. He then enters behind his daughter… only to discover that Darlene’s changed her mind. They can’t get back together, because they’ll just keep fighting until he leaves again, and she can’t bear the thought of breaking their children’s hearts. That’s when Dan enters to find his daughter tearing up. He asks if everything’s alright, then tells David he’s not to see Mark or Harris until he’s officially moved back to Lanford. Darlene walks him out, and tells him that the state of their relationship doesn’t change the fact that he’s back in town to be a more involved parent. She says that Mark has a parent-teacher conference next month, and she’d like him to attend. David then asks what Mark’s like, indicating that he barely knows his son. Darlene tells him that he’s just like his father — but likes to wear the occasional dress.

Once Darlene enters the house, Roseanne comes out to speak to her son-in-law. “I know you’re a quality person,” she says, and “I want you to prove me right.” David fights back tears and assures the woman who raised him that he won’t let her down. It’s a bittersweet way to end things, and a promising start to what’ll hopefully be an ongoing storyline next season — assuming Galecki is able to return for additional episodes. For now, at least, the show can reference David, and say he’s been spending time with Mark and Harris off screen.

David isn’t the only big return. Estelle Parsons reprises her role as Roseanne and Jackie’s mother, Beverly. She shows up at the Conner house with luggage, and informs her girls that she’s been kicked out of her nursing home. When asked why, she explains that she enjoyed quite the active sex life — “with multiple partners, in multiple parts of the facility” — and wound up giving a couple of the men “a little gonorrhea.” Now she’ll have to move in with one of her daughters, and judging by the photos from Episode 6 (airing Tuesday, May 1), it’ll be Jackie who draws the short straw!

What did you think of Johnny Galecki’s return to Roseanne? Are you satisfied with how they addressed David’s absence? (Looking for our next recap? Read about Roseanne Season 10, Episode 6 here.)