Warning: This post contains spoilers for the Season 1 finale of Netflix’s The Haunting of Hill House.

Netflix’s The Haunting of Hill House has been out for more than a week now, so it’s time to talk about one of the series’ biggest mysteries:

What the heck is in the Red Room? 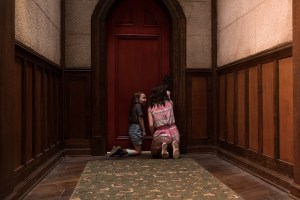 If you’ve made it through to the Season 1 finale, you know that the room at the top of the stairs — that one that Shirley and Nell wanted to get into so badly in the premiere — was really a chamber that changed itself for each member of the family.

The treehouse that Steven finds Luke drawing in during the premiere? Actually the Red Room.

Remember when Theo was practicing the “Cold Hearted” routine in what seemed like an abandoned part of the house? Yep, Red Room. In fact, she was responsible for the movement we saw on the other side of the door once Shirley and Nell stepped away after trying the master key in the season premiere. Conversely, Nell and Shirley were the unseen forces knocking on the door and turning the knob when Theo was trying to perfect Paula Abdul’s dance moves.

All of this is revealed by Nell, whose ghostly form saves each of her siblings from death-by-Hill-House. But I’m getting ahead of myself. As the Crain kids (as adults) enter their former home, they have incredibly lifelike and very disturbing dreams. Read on for the highlights of “Silence Lay Steadily.”

IN THE NIGHTMARES. IN THE DARK. | Luke, we see via flashback, is unable to light the place on fire like he intended, and instead winds up thinking that he was back on the street, looking for Joey after she walked out of rehab. He dreams that he finds her, and that she’s rented a hotel room where she can detox. But first, she wants him to shoot up with her one last time. A terrified Luke staunchly refuses — he’s got 90 days of sobriety — but she tells him it’s too late: When he looks down, there’s already a needle in his arm. And when her eyes begin to melt out of her sockets, we realize that he’s really passed out in the Red Room… with a syringe sticking out of his forearm and foam bubbling in his mouth. 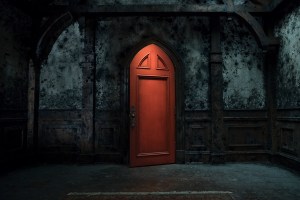 Because there’s a lot of time play in this episode, when we catch up with Steven, it seems like he’s reconciled with his wife, who is now pregnant. But as he attempts to write a book about his return to Hill House, he can’t remember how he got back to California, how he and Leigh patched things up, etc. That’s when she begins to mock him, and then she starts to putrefy. Nell shows up just then to touch her brother’s forehead; a moment later, he wakes up in the Red Room and rushes to start CPR on Luke.

Shirley’s dream is more of a memory of a time when she went to a work conference and slept with a married stranger she met there. (So that’s who the guy we’ve seen toasting her is.) She never told Kevin, and her guilt over the affair — as well as her hypocrisy regarding her reaction to finding Theo and Kevin together — eats at her. While Shirley attends her own funeral viewing, and watches her corpse claw its face off, Nell shows up to bloop! her back to reality.

Theo’s dream is that she’s in bed with her girlfriend, then a gajillion arms spring up to hold her down. She also wakes up in the moldy and mysterious chamber, just in time to see Shirley and Steven’s CPR efforts fail: Luke is dead. But that doesn’t stop him from attending a tea party in a massively cleaned-up version of the Red Room, where Olivia and little Nell are waiting. Olivia talks a big, happy game about how now he’s “awake,” but mini-Nell keeps telling him to get out of there. Finally, adult ghost Nell shows up to yank him back into the world of the living; in the as-close-as-you-can-get-to-real world, he abruptly draws breath, shocking his brother and sisters.

THAT TWIN THING | “She saved me,” Luke whispers, pointing to a corner of the room. Everyone turns to see adult Nell, wearing the dress she died in. “I feel like I’ve been here before,” Shirley says dazedly. “”We have, all of us has have. So many times, and we didn’t know it,” Nell answers, explaining that if the house is a body, the Red Room is its stomach. As such, it presented to the various family members as what they wanted to see. “It put on different faces so we’d be still and quiet while it digested,” she says. (Find out which of the series’ cast thought this was one of Hill House‘s most powerful moments.)

One by one, Nell’s siblings apologize for not being there for her when she needed them the most. She forgives each one. Meanwhile, in the hallway outside, Olivia stops Poppy from messing with Hugh, who’s shaky enough to need one of his heart pills. Mrs. Crain is half overjoyed to see the love of her life, half hella pissed that he took the kids away from the house. But he tells her that if she opens the door to the Red Room, “I will make a promise to you that I will keep forever.”

So she does. Hugh helps his children get Luke to the car, then walks back into the house with Steven. That’s where they step into a flashback as it plays out (and answers a few more mysteries). After Hugh dropped the kids at the motel on the night of Olivia’s death, he went back and found her dead in the foyer. He held her to him, crying about being able to “fix this,” and that’s how her blood ended up all over his clothes.

IS IT BAD WE’VE KINDA FORGOTTEN ABOUT THE DEAD GIRL UPSTAIRS? | Then the Dudleys showed up, looking for their little girl (!) who they’d realized wasn’t in her bed. Turns out, Abigail’s last name was Dudley, and the groundskeeper’s wife wept as she found her daughter’s corpse in the Red Room. But then ghost Abigail appeared, wondering what’s up, and her parents embraced her. Downstairs, Hugh watched Olivia’s ghost get up from her corpse and begin wandering the house, and he made a decision: He was going to burn the house so it couldn’t hurt anyone else.

But the Dudleys objected, given that their daughter was now a permanent resident. They offered an exchange: Their silence about Abigail’s death for Hugh’s promise that the house stay exactly as it is — though boarded up so no one else can get hurt.

“Let it starve, but leave it here, so I can see her,” Claire Dudley begged Hugh. 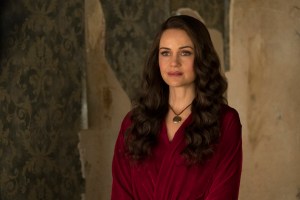 So he did. And as the memory winds down, Steven notices that his father looks rather dead himself, lying beside an empty pill bottle: Apparently, he held up his end of his promise to Olivia. “This is all yours now, the home and the promise,” Hugh’s ghost informs his son just before morphing into his younger visage and heading into the Red Room to reunite with Olivia and adult Nell.

OUR HOUSE IS A VERY, VERY, VERY TERRIBLE PLACE AND WE SHOULD NEVER GO NEAR THERE AGAIN | In a montage after, we watch Steven ask Leigh if he can come home and try again. Shirley confesses all to Kevin. Theo tosses the gloves she’s wearing as she and Trish move out of the funeral-home apartment. An aged Mr. Dudley carries a dying Mrs. Dudley through the woods so she can expire inside Hill House; moments later, she appears as a ghost, holding the baby she miscarried and hugging Abigail near. (For Annabeth Gish’s thoughts on the finale and more, click here.)

As Steven reads a passage from Shirley Jackson’s novel, aka the series’ source material, we watch the Crains gather to celebrate Luke’s second year of sobriety. Leigh is there, and she’s pregnant. Kevin is there, having forgiven Shirley. Theo and Trish are there, too. And the final shot of the series is of the house itself, which as Steven notes, “has stood so for 100 years and might stand for 100 more.”

Now it’s your turn. What did you think of the episode? Grade the finale (and the season) via the polls below, then hit the comments with the rest of your thoughts!