Yes, as we learned in Tuesday’s This Is Us, Jack’s signature means of calming down his anxious son came courtesy of a Vietnam War buddy. But, as series creator Dan Fogelman tells TVLine, the move actually originated with series star Milo Ventimiglia himself.

“It was something Milo, I believe, just started doing to the kids, and I was like, ‘Oh, that moves me,'” Fogelman says. “And then we started writing that in.” 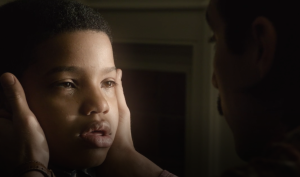 This week’s hour of the NBC drama showed us Jack’s time serving in the military, including a firefight that ended with one of his soldiers, named Robinson, losing a foot. Before Robinson was airlifted to a hospital, he noted that Jack was always pretending not to be scared, and that Robinson’s mother had a strategy for helping her kids settle down in moments of panic. “She’d tell us to breathe. It’s a funny thing that we forget sometimes. We’re so scared that we’re going to die, we forget to do the thing that keeps us alive.” Then he put his palms on either side of Jack’s face — the way we’ve seen Jack do with his kids in other episodes, as well as how Randall steadied William as the old man died — and told him to breathe.

“It’s basically an origin story of a behavior that locked onto him,” Fogelman says. “It’s something I think we all do in life… a moment that clicked into your brain that you adopt as a behavior moving forward.” 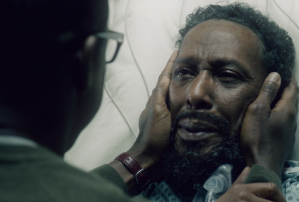 The EP relates the move to something one of his mentors did when Fogelman had just started in the TV business. The pair worked together on “a show that was failing,” and the older man had a large photo of his wife and family covering a corner of his monitor. “It was always annoying as hell, because I could never see the entire computer screen. And I’d say, ‘Why do you have to keep this right here?’ He said, ‘It reminds me why I work so late.’ It always stuck with me.”

Fogelman adds that he now does something similar with an “obnoxiously big” photo of his own wife at work, “because I always liked my friend, and I liked the way that he didn’t just like his family, or love his family, but he really adored them. I liked the way he was around them. So that was a behavior I adopted.”

Similarly, “Jack had this clear friend, and a behavior that he recognized,” the EP notes. “He saw something in that.”

Ventimiglia says that he connected very strongly with the simplicity of Robinson’s advice. “It’s one of those things, when you’re watching this, I feel like everybody collectively went [breathes deeply],” he says. “It’s these messages that really resonate to what we need to hear right now… It’s a really cool thing when a TV show can impact people in a way that makes them breathe.”

For more scoop on the making of This Is Us‘ “Vietnam” episode, make sure to read our behind-the-scenes post mortem with Fogelman, Ventimiglia and co-star Michael Angarano. — With reporting by Dave Nemetz