My jaw still hurt going into Tuesday’s episode of The Voice. The Battles had literally just begun a day earlier when Kelly Clarkson made such a “Wait, whaaat?!?” kind of a decision following the first sing-off that my jaw hit the floor with the thud of a two-ton mic drop. Cody Ray Raymond is a fine vocalist, to be sure, but to choose to keep him on her team over SandyRedd, who not only ranks high on TVLine’s list of Season 15’s Top 10 Blinds, but has her picture in the dictionary next to the term “showstopper”? Uh-uh, no. It just didn’t compute. At least I figured Tuesdays rounds couldn’t possibly dish out as big a shock… or could they? Read on and, as if you don’t already know, find out the answer. 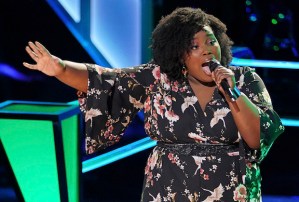 Team Kelly: Kymberli Joye (Grade: B+) defeated OneUp (Grade: C) on “Mercy” | Given the giantness of Kymberli’s “Run to You” in the Blinds, I kinda thought this would be a fair fight: One of her voice was equal to (and probably greater than) two of OneUp’s. Once the trio hit the stage, they immediately made me like them as a group: That opening harmony was lovely (and a good hint of what was to come in the closing acapella bit that mentor Thomas Rhett suggested). But ultimately, this Battle was Kymberli’s to lose. She owned that stage, not just shredding runs but freaking splintering them. And as OK as OneUp are, and as hard as they were clearly trying, they still came off like a cheesy Las Vegas lounge act. 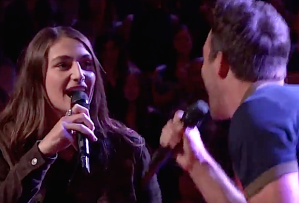 Team Adam: Steve Memmolo (Grade: C) defeated Anthony Arya (Grade: C-) on “Amy” — Anthony stolen by Jennifer | In rehearsal, Anthony sounded like a train about to wreck on this Pure Prairie League cover. Steve, while not my favorite of the Battles, fared considerably better. When they actually took to the stage, they were… let’s go with OK. Anthony’s inexperience showed, as did Steve’s inability to not remind me of an insincere Ben Affleck. Even the coaches didn’t fall all over themselves, as they so often do, to praise the singers. About the best that Adam could say about Steve was that he had more polish than his teammate and looked like you-know-who. Zzz. 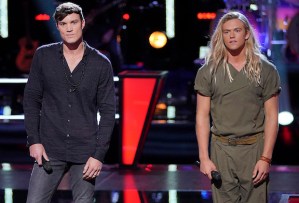 Team Adam: Tyke James (Grade: D) defeated Jarred Matthew (Grade: F) on “She’s Always a Woman” | With no fanfare at all, we dove right into this Battle — maybe to get it over with as fast as possible. Tyke was bad; Jarred, worse. Like, this was so cringe-y, it might have been a kindness to the competitors not to have aired it. (As it was, we only saw a little of it.) After the massacring of Billy Joel’s hit, the nicest thing Kelly could say was that Tyke resembled Tarzan. So yeah, not good. 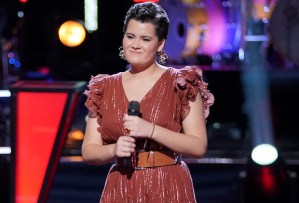 Team Blake: Chris Kroeze (Grade: B-) defeated Mercedes Ferreira-Dias (Grade: C) on “Back in the High Life Again” | In rehearsal, Chris and Mercedes didn’t sound as good together as they seemed to think. On stage, too, at least in the verse, they reminded me of a leather-and-silk outfit that the designers on Project Runway couldn’t quite make work. They fared better harmonizing on the chorus, but that didn’t make it much easier to say that one of them was better than the other. From what little we got to hear of this truncated Battle, though, Chris was more solid all the way through. 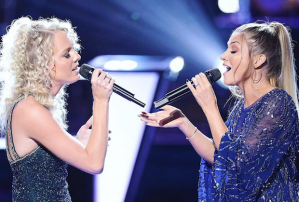 Team Blake: Katrina Cain (Grade: C) defeated Rachel Messer (Grade: B) on “Angel” | I would have bet any money that Katrina would slay on this. But she stumbled on stage, at least in the little snippet that we were shown, leaving the door open — or so I thought — for Rachel to eke out a victory. But Blake, maybe as high on Katrina as I was after her Blind, instead opted to stick with Katrina. And WTH is with these tiny, tiny snippets of Battles? Are we in some huge rush? The Voice and I are gonna have words! This wasn’t the kind of shock I expected Tuesday!

Team Jennifer: Mike Parker (Grade: B+) defeated Natasia GreyCloud (Grade: A-) on “Gravity” — Natasia stolen by Kelly | Color. Me. Surprised. Before this Battle, I couldn’t remember a damn thing about either Mike or Natasia — I actually had to look up my reviews of their Blind Auditions to remind me who they were. So their pretty-excellent John Mayer sing-off was a pretty-exciting revelation. Mike was as solid vocally as he’d been in the Blinds, but with a little extra swagger, which he needed. (He could have probably used a little more, truth be told, but at least he was going in the right direction.) And Natasia… she was just so in control of her massive voice that big notes that could easily have run off the rails stayed awesomely on track.

So, how pissed are you that we are being shown so many shortened Battles? Or is it just me who’s peeved? In spite of that, did anybody stand out to you tonight? Vote in the poll below, then hit the comments.