Former Weekend Update anchor Seth Meyers had his Saturday Night Live homecoming this weekend. Were any of his featured sketches worth, ahem, a closer look?

Despite what we’ve come to expect from alumni-hosted episodes, Meyers was not joined by any of his former castmates, such as Amy Poehler or Bill “Stefon” Hader. He spent a fair amount of his first-ever hosting stint playing opposite Kenan Thompson, and later returned to the Update desk for “Really!?!,” where he was joined by current anchors Colin Jost and Michael Che. Aside from that, it was business as usual, with the show delivering a mediocre-at-best episode to cap this October stretch. So, without further ado, my picks for the best, worst and somewhat in-between sketches:

BEST: REALLY!?!
Meyers has been doing his signature SNL segment on Late Night for quite some time (he and Poehler recently reunited to take down former FBI director James Comey), but it was a blast watching him do it behind the Update desk again, this time with his successors. Kanye West’s Oval Office meeting with President Donald Trump was the perfect subject matter, affording Meyers the opportunity to point out just how rare it is to see “black people and white supremacists betrayed in the exact same moment.”

BEST: TREES
Chris Redd’s realization that trees take a long time to grow had me howling. Almost as amusing was Pete Davidson’s alternate verse about “shoulda been president” Al Gore, after being told that this particular rap wasn’t about weed, but about the environment. 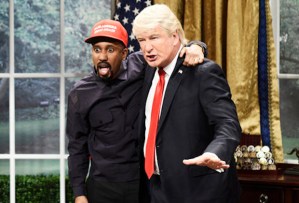 HONORABLE MENTION: KANYE WEST/DONALD TRUMP COLD OPEN
Trump-era cold opens tend to work better when they’re only tangentially related to Trump. This week’s cold open was inevitable, of course, but still a step down from both the Brett Kavanaugh hearing and post-game confirmation skits. Redd impressed with his interpretation of West manically pontificating in the Oval Office, but the inner-monologue bit was a dud, and Alec Baldwin was phoning it in, as usual.

HONORABLE MENTION: THIRSTY COPS
This was one of Leslie Jones’ better performances, and the first real showcase for new repertory player Ego Nwodim, who more than held her own. There’s potential for this to become a reoccurring sketch, but I do wonder if it’d work better as a digital short, a la “Dyke & Fats.”

WORST: MOVIE TALKBACK
It is simply inexplicable that this was given the post-monologue slot. I’m not sure what was worse: Aidy Bryant as a too-woke audience member, Kyle Mooney as a wannabe rapper, or Heidi Gardner getting stuck with an Adele Dazeem joke… in the year 2018.

WORST: JAIL CELLMATE
This isn’t the first time Thompson has played Bill Cosby since America’s former favorite TV dad was accused of sex crimes (he last played him during SNL‘s 40th anniversary special), but it was almost certainly the last time. The sketch didn’t work (and went on far too long), but its failure felt oddly appropriate. It felt like a funeral for an impression that’s done Thompson so much good over the years, but had to be put out of its misery.

What were your favorite sketches this week? And what missed the mark? Watch all the highlights above, then grade Meyers’ hosting stint in our poll.