The Titans team will slowly but surely start to assemble (are we allowed to use that word here?) when the DC Universe streaming service debuts its first original series on Friday, Oct. 12.

“He’s at a point where he doesn’t agree with [Batman’s] way of fighting crime, so he went on the road to find justice in a way that he believes in,” Thwaites tells TVLine. As such, by day he is a lone wolf police detective, but by night he remains Robin, the costumed crimefighter fated to one day rechristen himself Nightwing.

“He’s trying to find his ‘new thing,’ though it’s clear he hasn’t found it,” the Aussie actor notes. “But he’s searching, and that’s what the show is about.” 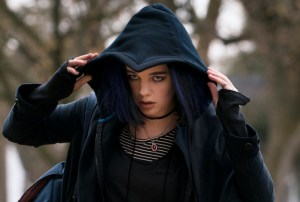 It is in the course of his day job that Dick meets Rachel Roth aka Raven (Home & Away‘s Teagan Croft), a young empath who is a bit too attuned to the detective’s tortured past, in which his parents tragically died. Orphaned and each battling (figurative or literal) demons, the two find common ground.

Describing the duo’s dynamic as “big brother/little sister” (and maybe even “father/daughter”), Thwaites says that Dick’s “intuition tells him that Rachel needs him, and that draws him strangely close to the sort of things he has been trying to get away from.” 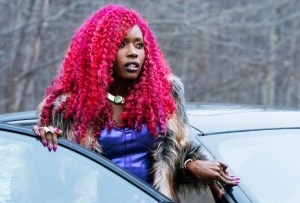 At the close of a harrowing Episode 2 skirmish, Rachel is pulled into the orbit of “Kory” (aka Koriand’r aka Starfire), a badass who boasts her own out-of-this-world origin story — though she sadly isn’t aware of it at the moment!

“In the pilot episode, Starfire wakes up having lost her memory. She doesn’t know anything about herself,” says portrayer Ann Diop (24: Legacy). But as she embarks on a Memento-like journey to gather the pieces, “She starts to find out who she is.

“She’s very instinctive,” Diop adds, “so sometimes she’ll have the urge to do something, and she’ll just do it. Like, ‘Oh, I guess I have this power!'”

As for the, um, colorful wardrobe Kory is at first seen clad in, “She has been working undercover, and this is the outfit she came up with to embody this persona. But we’re not wearing it all season,” Diop reassures with a laugh. 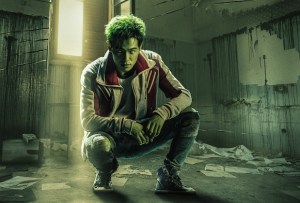 Closing out the premiere, the final Titan candidate is spotted (or more accurately, striped), after rousing a night watchman: Gar Logan, a teen with the ability to shapeshift into any animal — ergo the name Beast Boy. “He’s a kid in a candy store,” portrayer Ryan Potter (Big Hero 6: The Series) says of Gar’s gung-ho attitude, which stands as a fun contrast to his prospective teammates. “He’s the light at the end of a dark hallway, and we can be in a dark hallways sometimes on this show!” 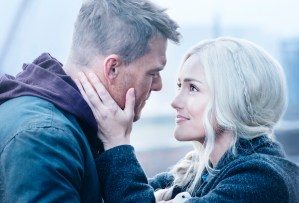 Though the series gets off to a bit of a dark ‘n’ dreary start, Episode 2 flies a bit higher with the introduction of Hank “Hawk” Hall and Dawn “Dove” Granger (played by Blood Drive‘s Alan Ritchson and Friday Night Lights‘ Minka Kelly). “Hawk is the avatar of war and chaos, and Dove is the avatar of peace, so they balance each other out,” Kelly observes.

As for where they each are in life, “Hawk’s a bit broken down and doesn’t want to give up [vigilantism], and Dove I think would rather go live in the suburbs and be a family,” Kelly adds, smiling. “But she’s not going to leave Hawk to his own devices, because she needs to save him once on a while, as he gets into trouble.”

Geoff Johns, who this summer stepped down as DC Entertainment president/CCO and is among one of Titans‘ executive producers, admits that “it’s actually weird” to see the series finally come to life, given that it’s been knocking around for years and years, including as a project for TNT.

Fellow EP Akiva Goldsman, who with Johns developed that original take on the team-up series, acknowledges, “That was not the finest hour for Titans, because we felt pretty sure that TNT was going to do it. But [TNT president] Kevin [Reilly] never liked the script.”

What DC Universe subscribers cue up this Friday is “fundamentally the object we tried to make then, but better for the years of work,” Goldsman adds. “We simply got to refine it and make it better.”