And she’s off! Thursday’s Grey’s Anatomy marked the official beginning of Meredith’s Season of Love, and the milestone did not go unnoticed. When she showed up at Grey Sloan all made up for the blind date on which Cece was sending her, heads turned, and tongues wagged. But Grey’s dive back into the dating pool, major as that turning point is, might not have been the episode’s most momentous twist of plot. What was? Read on. 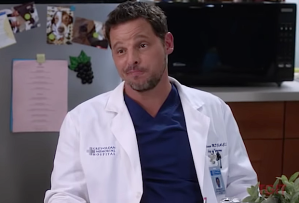 ‘LUNCH IS BORING!’ | As “Momma Knows Best” began, Maggie wasn’t sleeping, she was so concerned about Owen and Amelia’s relationship status, given what she knew about Teddy’s delicate condition. At the same time, “hag” Amelia was going at it with Betty over the teen’s slip with drugs. And “I can’t do what I want to do,” Amelia railed to Owen, “or we’d have to hide her body!” Meanwhile, Alex wondered whether Jo was hitting him up for money for new equipment while she had her hand on his… you know, equipment. “You made me feel dirty,” he said as if it was a bad thing. At work the next day, Alex informed Link that his expenditure was on hold, and at once, Mer’s glam look turned heads — first Taryn and Link’s, then DeLuca’s. Carina was telling her brother that she might have to go home for their dad for a while, but seeing his reaction to Mer, admitted, “I don’t want to leave town when you’re about to make a fool of yourself over your lady boss!” Shortly, an apartment fire brought Andy and Dean from Station 19 to Grey Sloan with Natalie, a 40-year-old patient, and her son, Max, who appeared to be almost too scared to get out of the ambulance.

When Amelia, Maggie and Alex got a gander at Mer in the staff lounge, they immediately deduced from her attire that something — they weren’t sure at first what, but something — was up. “You look weird,” Alex told his person. Amelia guessed that her sister-in-law had been to a funeral. Then, finally, Maggie realized that Mer had allowed Cece to set her up. “You’re letting Mrs. Santa Claus bring you presents!” exclaimed Amelia. But, since the matchmaker was old school and liked people to meet with no preconceived notions, Mer hadn’t seen so much as a picture of her date. So what’s he hiding? Alex wondered. “Neck beard? Man bun? Ear hair?” And what was the point of a lunch date? Amelia chimed in. “You can’t make lunch last all night!” Soon, Maggie joined Bailey in the ER to treat Natalie, who explained that Max needed to be told what was going on, or he’d get frightened. Unfortunately, Andy ushered the boy into his mom’s room just as every piece of equipment sounded alarm bells. 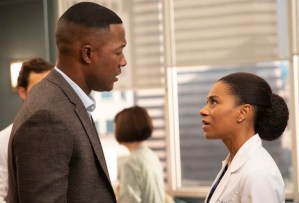 ‘WE WERE WAITING, NOW WE’RE STALKING’ | Until a social worker could arrive to sit with Max till his dad showed up, Andy volunteered to do so. When Dad got to Grey Sloan, Maggie explained to him that Natalie was having heart trouble — in such a way that Dean became infatuated with the pretty doc. Spotting Ben in the hallway, Bailey busted him for getting (slightly) injured on the job. From there, she went into surgery with Maggie and DeLuca, and discovered that Natalie had probably had a heart attack a week ago and not realized it. “There is only a slim chance that [she] will wake up again,” Pierce told Natalie’s husband after leaving the O.R. When Max almost overheard, Maggie tried to break the news to him, too. But instead of allow her to, Dad intervened and said Mom was gonna be fine. (Come again?) Shortly, Maggie found Max hiding under a desk and was about to fill him in about his mom’s condition when again, Dad butted in. “He needs to know what’s coming,” Pierce argued, reminding Pop that his wife was likely a goner. In response, Dad instructed her not to speak to his son.

Later, Dean worked up the nerve to ask out Maggie. Mind you, he used as an excuse to talk to her checking on Natalie, who Pierce reported wasn’t doing well. So he was left “just trying to pivot from” that downer to the actual asking-out part of the convo… which resulted in Maggie laughing since she’d once had a fiancé named Dean. Thankfully (?), Natalie coded, sparing Dean any more awkwardness. Maggie pleaded with Natalie’s husband to give Max a chance to say goodbye, but he still wouldn’t allow it. To keep the boy occupied, DeLuca showed him the helipad. On the roof, Max admitted that he knew his mom was in bad shape, prompting DeLuca to tell him that his sister had lied about his mom dying so that she could be there to hug him when he found out. Deducing that his own mom was at death’s door, Max went tearing back into the hospital.

‘IF YOU TELL MY MOM, I’LL SUE YOU GUYS!’ | While all that was going on, Alex and Dahlia treated Julius, a college kid who’d inhaled smoke in the apartment fire. Costs be damned, Karev even insisted that he get X-rays — which turned out to be a good thing as the patient had a pulmonary bleb, which was far deadlier than it sounded. When Julius learned that Alex wanted to operate, he hit the roof — since his condition was preexisting, surgery would put him and his mom 20 grand in the hole. When not dealing with that case, the chief was accosted by Jo, who wanted an apology for the night before — if she had sex with him, it was for one thing: orgasms, she shouted… without realizing that Richard was right behind her. Later, Webber refused to cater to Alex’s frustrations over Julius and quit being chief until he had done the job to the best of his ability. Desperate to help the kid, Karev manufactured an injury that would necessitate emergency surgery, which would be covered by the patient’s insurance. Since Dahlia reported the chief’s actions, as she was obliged to, Richard warned Alex that he might not only lose his job but his medical license. Of course, Alex was only doing what his mentor had told him to — tackling his new position to the best of his ability. While operating on Julius with Webber, Karev said that, if need be, he’d tell the medical board about the time that he stole a car — at age 12, to get help for his sister since they couldn’t afford an ambulance. “Won’t you get fired for this?” Julius asked later when he found out about Alex’s good deed. “Probably not,” Karev replied. “I’m the chief.” 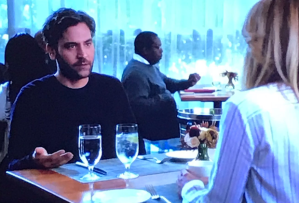 ‘LET’S START THE CLOCK’ | When Mer arrived for her lunch date, John (Josh Radnor) complimented her coat, her purse — the works. Silly as that was, things got off to a fairly decent start. She learned that he developed software to help protect people’s privacy, and when he learned what she did, he was duly impressed. And sure, he wasn’t Scott Speedman, but he was pretty cute and charming. He even complained about dates who used there, their and they’re wrong in texts, and understood the appeal of being married to one’s work. That being the case, she was going to rearrange her afternoon to continue with the date… when he spotted the woman he was supposed to be on his date with across the restaurant! Unwilling to leave Mer behind, he texted the woman that he’d never want to stand her up, but something had come up that he couldn’t get out of. At the same time, Mer texted the John that she was supposed to be on her date with — quite possibly the guy John’s date was hitting it off with at the bar! Strolling around Seattle with John afterwards, Mer found out that he wasn’t a fan of single moms and their eagerness to speed up relationships. At that point, she admitted that she had three kids herself and sweetly ended the date. Back at the hospital, Mer reported to Amelia and Andy that her date had gone horribly — and that she didn’t intend to go on any more dates. She shouldn’t give up so easily, Herrera argued. The way she saw it, Grey had dodged a very slow moving bullet by finding out sooner than later John’s feelings about single moms.

‘YOU’RE BUILDING A BOAT’ | After dragging Betty to Grey Sloan for a drug test, Amelia was still flummoxed by how to deal with the teen. So she called in for backup Owen’s mom, who advised her to build a boat strong enough to float when the kids sail away. Nearby, Owen told Betty that if she let Amelia help her and didn’t lie to her, she might start to drive her a little less crazy. In response, Betty confessed to Amelia that she’d smoked a little pot — a big no-no for an addict, as it led to cravings for far worse things. Though Amelia grounded the girl for a month, and the girl labeled her guardians “so lame,” Owen and his ex were nailing it as foster parents. As the episode drew to a close, it was revealed that Jo and Link are old acquaintances (the kind who were thrilled to see one another). And, heartbroken over not being able to tell Max about his mother, Maggie unburdened herself to Mer, blabbing that Teddy was pregnant with Owen’s baby. And in the last few seconds, Max ran away from the hospital (and onto Station 19).

So, what did you think of “Momma Knows Best”? Mer’s blind date? Maggie’s decision to violate doctor/patient confidentiality? Hit the comments.