Season 15 of Grey’s Anatomy is going to present Meredith with a challenge that may be even greater than Megan’s abdominal wall transplant: dating. “It’s hard,” says showrunner Krista Vernoff with a laugh, “and everybody has to do it, so it’s very human and very relatable. I was really interested in seeing someone as beautiful and smart and funny and complex as Meredith actually have to put herself out there.

“That’s what she’s doing this season,” she adds, “and it’s something that somehow we’ve never really seen in 15 seasons of this show!” 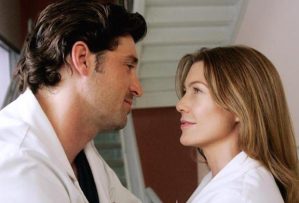 Making matters even more difficult for Ellen Pompeo’s widowed surgeon is the fact that she’s already been in love — big-time. But “the joy for me in working on this story with her and the writers,” says Vernoff, “was in looking at the women in our lives who find themselves single after a happy marriage. There are things that they have in common, [such as] that that next great love doesn’t just fall into your lap!

“One has to grieve, and then one has to move forward and then try a rebound relationship,” she continues. “Then one has to go out into the world with an open heart, and without jadedness or fear, and say, ‘OK, universe. I’m looking. I’m available.’ And they have to dip their toe back into the dating pool.”

And, although Mer is at a different stage of life than she was when she first hooked up with Derek, her experience this time around may not be entirely different. “Life changes everybody,” Vernoff acknowledges. “But one thing that I’ve noticed is consistent in my family and friends is, no matter how old they are, romance can take you by surprise and sweep you up. My stepdad is in his 70s, and after he reconnected with an old flame a couple of years ago, he sat in my living room texting like he was a teenage girl.”

What lucky fellow is going to have the same effect on Mer? We know it won’t be DeLuca, though he and Grey do hit the sheets in Season 15’s first promo. Beyond that, “I can’t tease who she will end up with,” Vernoff insists, “but I can say that it is going to be a joyful, funny, complicated journey to get there.” What do you say, Grey’s fans? Is there a guy on the show with whom you could see Mer clicking?