Is it really “all good, man”? We’re still not sure, after Better Call Saul‘s Season 4 finale.

Yes, Mike tracked down AWOL Superlab architect Werner and had to kill the guy himself, after cleverly evading a pursuing Lalo — and yes, we got to see Gale again, which is always nice. But the finale’s main event was Jimmy’s desperate attempts to get his law license reinstated, which included publicly mourning Chuck and financing a new reading room dedicated to his late brother in order to schmooze influential board members. Arguing his case in front of a panel, Jimmy gave a tearful speech about honoring his brother and the McGill family name, and earned reinstatement. But he shocked Kim by revealing all that emotion was just another con job, and that he now intends to practice law under a new name — reassuring a wary Kim by telling her, “It’s all good, man!”

TVLine reached out to executive producer Thomas Schnauz, who co-wrote the finale with fellow EP Peter Gould, to get the inside scoop on Jimmy’s long-awaited transformation into Saul Goodman. Below, see what he says about the state of Jimmy and Kim’s relationship, why Jimmy broke down in the HHM parking garage like that, Lalo’s rapid rise to Big Bad status, and whether we might see more of Gale next season.

TVLINE | So we’ve reached the pivotal moment where Jimmy McGill becomes Saul Goodman. When you were charting this out in the writers’ room, was this always where you wanted to place it?
We have tentpole ideas of things we’d love to reach at certain points, but as we go through the season, things change. Honestly, from Season 1 on, we thought, “Oh, by the end of Season 1, he’s going to be Saul Goodman.” [Laughs] Then the same thing probably happened in Season 2, and then we sort of gave up on that idea and said, “He’s gonna be Saul Goodman when it’s time to be Saul Goodman.” It just sort of worked out in Season 4 that this was the spot.

Certainly after the death of Chuck, we thought it was a big turning point, and it still took longer than we thought for him to become Saul Goodman, because other things had to happen. It wasn’t just the death of his brother, and his role in that death, that turns him into Saul Goodman. It’s the suppression of that guilt, and so many other things going on, that finally snaps him in the end. And even though he says, “It’s all good, man” at the end of Season 4, he is not the Saul Goodman we know in Breaking Bad. There’s still a road to go down to get him to that point. But the world of Walter White and Gus Fring and Mike are creeping into Jimmy/Saul’s world, so it will get darker. Things are definitely going to get darker. 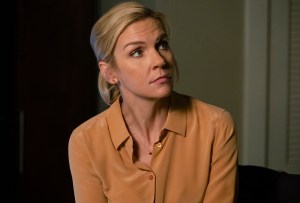 TVLINE | Jimmy got his law license back, but did he lose Kim in the process? Can she ever trust him again, knowing how insincere he can be?
It’s complicated, because Kim and Jimmy have been pulling scams together as early as Season 2, tricking the guy in the bar. And she loves Jimmy. It becomes a question of: If the person you love is going through something, do you abandon them, or do you help them? In my eyes, Kim is a fixer. She has this great job, but still, something’s missing, so she goes and does this [public defender] work and helps these people who are in trouble. And they’re not all innocent people! She is a person who wants to help people who can’t really help themselves, and certainly we’ve seen Jimmy McGill is a person like that. So she’s gonna stick around for the love of this man. The thing we’re going to find out is if Chuck McGill was right. He had a warning to Kim in Season 2. He said to her in one episode, “He’s gonna drag you down.” We need to see if that’s going to happen.

TVLINE | That opening scene was maybe the sweetest we’ve ever seen Chuck be with Jimmy. Was that a way to show that maybe Chuck wasn’t always as awful as Jimmy remembers?
Yeah, we wanted to find sort of a good memory to open up on. They were brothers, and they loved each other, and Jimmy took care of Chuck for the longest time. We thought, “Let’s show a moment where Chuck cared for Jimmy.” Of course Chuck is being duplicitous in that he was the one who told Howard not to hire Jimmy. [Laughs] But still, he stands up for his brother, because Jimmy asked him to. Then Chuck tried to sneak out of the karaoke bar, but Jimmy caught him and kind of reeled him back in. So yeah, they had some good times here, and there’s some sweetness. A little alcohol kind of greased the wheels, and they were having fun together. It hasn’t always been bad between them. We’ve seen scenes like that throughout the series, certainly in Season 1. But we wanted to show a counterpoint to help influence that breakdown that Jimmy has in the garage. He says to Christi outside HHM, “the winner takes it all,” and whether he’s consciously thinking of that moment or not, it’s somewhere deep inside of him. 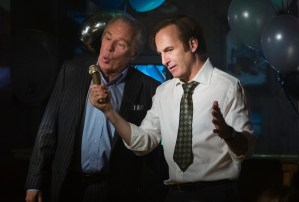 TVLINE | How did you decide on that ABBA song? Did you consider any others?
I’m pretty sure that it was Peter [Gould] who, very early on, when we started talking about singing, somehow he locked onto that song. I couldn’t really tell you why, but when he brought it up, it just kind of felt right, so we stuck with it. We were open to other songs, but nothing else ever felt right.

TVLINE | And that song comes back when Jimmy’s talking to Christi. He tells her they’ll never let someone like you in, but you need to get in anyway, and break all the rules if you have to. Is that something that he wishes someone had told him years earlier?
I think somebody did. We had a scene in Season 2, a flashback to when he was a young kid and someone gives him the “wolves and sheep” speech, after his dad was made to look like a sucker. And I think it possibly poisoned him very early on. It’s not a good speech! It’s not the kind of speech you want to be telling a young, up-and-coming lawyer. It’s dark. You kind of want to enter the world with more positivity instead of somebody telling you, “They’re always going to see you as a shoplifter! Screw them!” [Laughs] And I think if you ask Bob [Odenkirk], there are different theories as to why the crying scene happens in the HHM garage, but I think in Bob’s opinion, it’s the fact that he’s become that person who gives that kind of advice to people. That’s who he is, and in that moment, it’s sad to him. 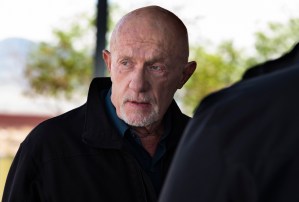 TVLINE | I spoke with Jonathan Banks a couple weeks ago, and he said Mike’s Achilles heel is having too soft a heart, and caring too much about people like Werner. But he still managed to pull the trigger. How hard was that for him?
I think it was really difficult. The end was in sight for Werner. Based on who Gus Fring is, Werner was going to die. And a lot of it is Mike’s fault. After Mike screwed up the first time, talking in the bar and drawing pictures of the Superlab, he should’ve just been sent home. But Mike gave him a second chance. He dealt with this using a “half measure,” according to something he says later on in Breaking Bad. He learns a hard lesson from all this business with the Germans and the Superlab.

TVLINE | Lalo Salamanca is shaping up to be a very worthy adversary. Can we expect to see him as a major antagonist next season?
We’re definitely going to see more of him. He is a thorn in Gus Fring’s side, and there are a lot of secrets rolling around with Gus and Nacho and Mike. He’s very smart, and he’s ruthless, and I think it’s a good person for us the writers to have around, to make things interested. I think we want to see more of Lalo.

TVLINE | We also got another Gale appearance! Can you find a way to bring David Costabile back in Season 5, or is the Superlab still too far away from completion?
He’s a very busy person. We got his scene done in a weekend, I think. We shot on a Saturday. But we love David. We love the character of Gale. That’s something we’re working on in Season 5, how much we’re going to see of that world. If I could wish for one thing right now, it’s that the streams would start crossing a little more, and we’d see more crossover with Jimmy and Mike, and those worlds coming together, which I think we’re moving towards. Jimmy and Nacho haven’t seen each other since Season 1, and we want to mix those worlds back up, too.

Grade tonight’s Better Call Saul finale in our poll, and then drop your post-finale thoughts in a comment below.