Mike Ehrmantraut hasn’t had to kick anyone’s butt this season on Better Call Saul… but then again, the season ain’t over yet.

This week, we thought Mike was headed for a physical showdown with Kai, the rebellious punk who’s part of the construction crew working on Gus Fring’s Superlab. But Kai backed down when given a chance to take a swing at the old guy… and suddenly, a new target of Mike’s ire materialized. Getting too drunk at a local bar, Werner — the German architect in charge of building the Superlab — blabbed about his top-secret construction project to a couple of strangers. Mike quickly yanked him out of there, but the damage may have already been done.

We reached out to Jonathan Banks, who’s earned four Emmy nominations now for playing Mike on Breaking Bad and Better Call Saul, for his take on Mike’s Season 4 journey so far. Below, he tells TVLine about how the run-in with Werner exposed Mike’s “Achilles heel,” hints that we can expect to see him get physical with someone in the near future, and explains why even the infamous Gus Fring can’t intimidate Mike. 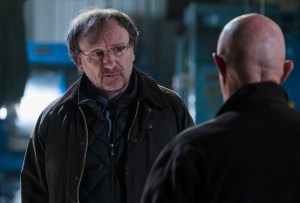 TVLINE | Werner had some loose lips this week, and Mike had to put him in check. Does Mike still trust him, or is he just telling Gus that he trusts him?
I think a good reference point is Mike’s “half measures” speech in Breaking Bad. Mike has not yet gotten to full half measures yet. But you know, it’s always Mike’s Achilles heel. Mike has a compassion for other people… that he probably sees as a weakness. [Laughs] But it’s just there. There’s a softness for the misguided and downtrodden.

TVLINE | Actually, Mike hasn’t had to get physical with anyone in a while.
I can tell you this: He will. [Laughs] You know, I love physicality. I love the action. When it’s not gratuitous and it’s called for, and it suits the storyline, I think it’s important to have it. You can talk people to death. 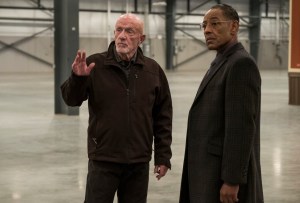 TVLINE | Mike and Gus have this fascinating dynamic between them. They’re both no-nonsense, and I think Gus appreciates how unflappable Mike is, how not intimidated he is by him.
Well, Mike has nothing to lose anymore. The only reason that Mike has not eaten his gun is because of his granddaughter, and what he owes his daughter-in-law. In Mike’s mind, he took their father and their husband, not to mention that it was his son. But Mike’s soul is burned. And he’s not one of those people who [says] “it’s all going to be OK.” It’s not OK. It’ll never be OK. So in his relationship with Gus, there’s not much Gus is going to do to intimidate Mike.

TVLINE | We learned a little bit about Mike’s dad, too, how he walked out on the family and left them with a stack of bills to pay. How does that inform who he is today?
Well, he doesn’t trash his father. He just says, “It’s just the way it was.” Essentially, when he talks about his dad, there’s a chuckle. And it’s not a nasty chuckle. It’s just, there are some guys that just can’t deliver. We all have those people in our lives: people that are sweet and nice, and they’re f–k-ups. [Laughs] That’s all there is to it. And sometimes they’re your dad. 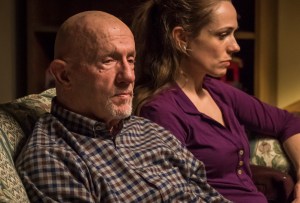 TVLINE | I want to go back to the episode a few weeks back, with the support group. When Stacey talks about forgetting Matty, Mike doesn’t say anything, but we can see the anger building up in him. Was that what led to him lashing out at everyone?
I think it’s the trigger point. Even though she later says, “I’d never forget Matty,” just the words of saying, “I didn’t think about him today”… that, I think, is out of Mike’s realm. He can’t conceive of not thinking of his son. So that triggers the rest. When we walked into that room the first time… first of all, it’s about the most depressing room you could ever walk into. The last place that Mike Ehrmantraut is gonna go is into group therapy. It’s just not something that he believes in. But he did it for Stacey. He did it for her. But what Mike is essentially saying to these people is, “You gotta move on. Quit feeling sorry for yourself, quit blaming other things, and move on.”

TVLINE | I was rooting for Mike and Anita, because you two definitely had chemistry, but did that incident effectively end things between them?
It may. It may not.

TVLINE | I wonder if he ever collected that ten bucks from her. Because they had a bet about the guy being a fake, right?
Yeah, I had never thought about that. She owes me ten bucks!