Better Call Saul‘s Kim came over to the dark side this week to help Jimmy… but can she ever go back again?

She and Jimmy hatch an elaborate scheme to keep Huell out of jail for walloping that cop: Jimmy catches a cross-country bus, writing dozens of letters and postcards along the way. He recruits his fellow passengers to help, too, paying them a buck per card, before dumping them all off at a dusty post office in the town of Coushatta, Louisiana. Back home at the nail salon, Jimmy is up late affixing stickers to dozens of burner phones when the owner senses all isn’t well with him at home: “Whatever she says, you say sorry.” But Jimmy, sensing Kim is pulling away from him, mournfully replies, “I think we might be past that.” 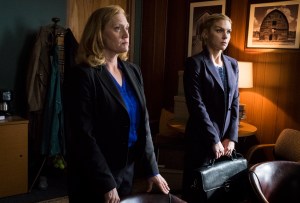 The scam gets underway when Kim arrives to meet the prosecutor Suzanne with three high-paid associates in tow. They threaten to drown the case in continuances and subpoenas, and even hint at getting the ACLU involved, but Suzanne doesn’t budge: “Your client is still going away.” The judge, though, wants answers when his office is flooded with (yep) postcards and letters from Huell’s hometown of Coushatta, all singing his praises and vowing to travel there en masse if he’s ever put on trial. He pushes Suzanne to settle this, so she grabs a bin full of letters and starts digging in, barking at her underlings: “We missed something, and I want to know what.”

She opens a few letters and calls a phone number she finds on one, reaching a nice lady named Eloise, who tells her Huell is “the dearest, dearest man” and “a pillar of our church.” But really, it’s the makeup girl from Jimmy’s commercial shoot, answering one of the many burner phones Jimmy set up for this, each assigned to a fake Coushatta resident. (“I’ve been taking improv classes,” she says proudly.) Jimmy sits in his nail-salon office with his film crew, answering a phone himself as a drawling church pastor and spinning a tale about Huell saving lives after a fire broke out in the rectory during Bible study. He also inquires about Huell’s trial date… because he’d like to charter a bus or two so his congregation can attend.

Next thing we know, Kim is in court hammering out a plea deal for Huell — and when she finds Jimmy outside the courtroom, she passionately makes out with him in the stairwell. They end up in bed, after which Jimmy delights her with his pastor impression. (“I’ve got crawdads in my pants!”) She’s impressed with his phone scam, and how they managed to get Huell off with just four months probation and time served. Back at Mesa Verde, she’s deeply bored by the prospect of another branch expansion, and pulls the copper bottle stopper to a bottle of Zafiro Añejo tequila out of her desk, examining it closely. Is Giselle St. Clair about to make another appearance?

As Jimmy is looking at a fairly depressing office space for his firm, Kim interrupts to tell him she’s been “driving around, thinking about things.” They share a cigarette, just like old times, and Jimmy apologizes for roping her into an illicit scheme, noting how close he is to being reinstated as a lawyer and assuring her they’re “totally done with all that.” But Kim has another idea: “Let’s do it again.” 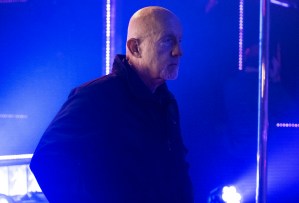 LOOSE LIPS SINK SUPERLABS | Mike takes Werner and his Superlab construction crew out to a strip joint for a little of that “R&R” they talked about. Of course Kai manages to get kicked out, and almost comes to blows with Mike before backing down after the old man sternly warns him: “Go on, try me.” (Yes, Kai, please do.) But Mike’s biggest problem, surprisingly, comes from a drunken Werner, who blabs to a couple of strangers at the bar about this massive construction project he’s working on, even sketching it out for them on a coaster. Mike hustles him out of there and cautions him the next day not to let that happen again: “The man I work for is very serious.” Werner swears it won’t, and Mike reassures Gus that “I’ve got eyes on him” — but now I’m thinking Werner might end up suffering the wrath of Mike before Kai does. 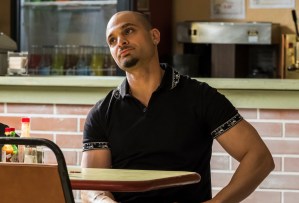 NACHO, MEET LALO | Hey, Nacho’s alive! He actually looks much better after the time jump, too, mostly healed up from his gunshot wound — he still has a scar — and collecting fat stacks of cash as an enforcer for the Salamancas. He’s got a newfound edge, too, snatching a drug dealer’s earring right out of his ear when the dealer comes up short. But when he arrives at the Mexican restaurant one day, he finds a friendly stranger cooking up a delicious meal in the kitchen. The man offers Nacho a plate before introducing himself as Eduardo “Lalo” Salamanca, and says he’s here “to lend a helping hand.” He tells Nacho not to worry… but I gotta admit, I’m a little worried.

* The only previous reference to Lalo was Saul Goodman’s first Breaking Bad appearance, when he yelled at a masked Walt and Jesse: “Lalo didn’t send you?” We didn’t know Lalo was a Salamanca… but we definitely know that Jimmy does something to make him mad at some point.

* And yes, that was Domingo, aka Krazy-8, working with Nacho at the Mexican restaurant. Nice to see him alive, and without a bike lock around his neck.

* We’ve seen how excited Kim gets when she dabbles in being bad before — but why do I have the sinking feeling this one is going to spin way out of control?

* Those Manitoba fake ID cards Nacho had in his safe for himself and his dad: Are those a last resort? In case things go completely south with the Salamancas, he and Dad can flee to Canada and start a new life?

* Interesting to hear Mike talk about his dad, who walked out on his family and left them “with a stack of bills,” as he told Werner. Mike is so guarded that any tiny morsel we get about his personal life feels like a big deal, right?

* I was surprised to learn that Coushatta is a honest-to-goodness real town in Louisiana, 45 minutes south of Shreveport. Their tourism board must be thrilled with all this free publicity. Be sure to visit the rectory, newly rebuilt after the fire!