The split-screen used at the start of this week’s Better Call Saul was no accident: Jimmy and Kim are in two very different places these days.

That highly entertaining opening montage, with the couple living their separate lives in a split-screen, brings with it a pretty significant time jump. Eight months pass as Jimmy sells phones — he has business cards billing himself as “Saul Goodman” now — and completes his law license suspension while Kim settles in at Schweikart & Cokely. (She even gets her cast off!) Even when they share the same scene, though, they’re still separated by that central split — a hint that they’re not on the same page, even while lying next to each other in bed. Jimmy’s still dreaming of starting his own law firm, even without Kim: He excitedly shows off a residential home as a potential office space to Huell… who’d actually prefer to work in a glass high-rise, “when I’m not on my boat.” 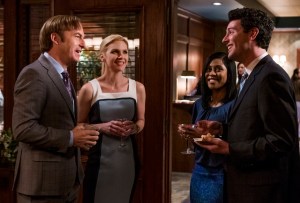 The split becomes more drastic when Kim takes Jimmy as her date to a company party at her new firm. Jimmy is cordial at first, but after seeing the size of her office and surveying all of her professional accomplishments, he hits the sauce pretty hard and tries to talk Rich into taking the company on a lavish ski retreat in Telluride. Kim’s smile fades into an embarrassed grimace as he goes on and on, and their ride home together is filled with awkward silence. (“Well, that was something” is all she can offer.) But Jimmy soon needs her help when he experiences a hiccup in his phone-slinging business… thanks to an overzealous Huell. 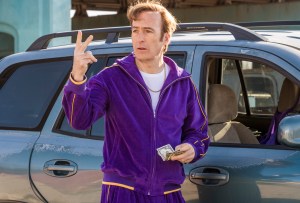 As Jimmy sells phones out of the back of a van in a shady part of town, he’s approached by a plainclothes cop who found “Saul’s” business card on a drug dealer he arrested. The cop asks him to stop “peddling to a bunch of lowlifes” and sell somewhere else, but Jimmy won’t budge: “My customer base is right here.” He has a permit, he informs the cop, and everything he’s doing is completely legal. But as their conversation gets heated, Huell walks up with headphones on and, thinking the cop is attacking Jimmy, clocks him in the head with a bag of sandwiches. Huell ends up handcuffed in the back of a squad car, and faces eighteen months in prison as a repeat offender… only he’d rather “bounce” (i.e. go on the lam) than end up back behind bars.

So Jimmy turns to Kim, hoping she’ll take on Huell as one of her criminal defense clients. This all throws Kim for a loop — she didn’t even know Jimmy was reselling phones — and when he suggests they frame the cop to look like a drunk with anger issues, she looks at him like he’s crazy: “I’m not tearing down a cop.” She does agree to look into Huell’s case, and tries to talk the prosecutor into letting him off without any jail time. But the prosecutor stands firm… and refers to Jimmy as “a scumbag disbarred lawyer” while she’s at it. Kim breaks the news to Jimmy that Huell is probably headed for prison, and Jimmy zips off, telling her not to worry. Kim senses he’s contemplating some bad decisions, though, and in the midst of a shopping trip to stock up on markers and highlighters, calls Jimmy to say: “Whatever you’re doing, don’t… I have a better way.” 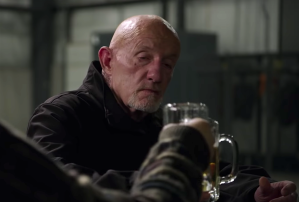 MEN AT WORK | The eight-month time jump also means that the Superlab is coming along nicely: The massive space is mostly cleared out now, unfinished but full of potential. One of the workers accidentally crashes into a huge pipe with a bulldozer, though, almost killing a co-worker and nearly triggering a fistfight. Werner warns Mike that the accident means construction will be even further delayed, but Mike reassures him that Gus just wants the job done right. (Mike still wants that troublemaker Kai out of there, but Werner says he’s his best demolition man, so he stays.) The men are getting antsy, and Mike realizes they need some “R&R.” Hmmm… a spirited game of paintball, maybe? With Kai as Mike’s primary target?

* Hector Salamanca is awake and tapping his finger to give simple yes/no responses to questions. (No, he doesn’t have a bell yet.) He’s even well enough to “accidentally” knock over a glass of water so he can get a good look at his nurse bending over to clean it up. The doctor from Johns Hopkins told Gus he’s making great progress… but when Gus saw video of Hector leering at the nurse, he started to think it’s too much progress. So he sent the doctor back home, even though she said she could have Hector walking and talking again. Gus doesn’t want this wounded animal to fully recover, does he?

* I have a bad feeling that getting Kim entangled in the Huell case is what leads to the permanent split between her and Jimmy. When she learns the full scale of what he’s been up to, can she ever trust him again?

* Was the prosecutor mistaken, or was Jimmy actually disbarred? I thought once his suspension was up, he was free to practice law again. But maybe that explains why he eventually turns to the “Saul Goodman” alias.

* I was surprised to hear Jimmy say he’d spring for a “snazzy Keurig” coffee maker for his new office — but yes, Keurigs were indeed available all the way back in 2004, although mostly limited to office use at that point.

* Three weeks in a row now with no Nacho. There’s no way this season ends well for him, is there?