Better Call Saul covered a lot of ground this week, but the highlight was getting to spend some quality time with everyone’s favorite grumpy fixer: Mike Ehrmantraut. 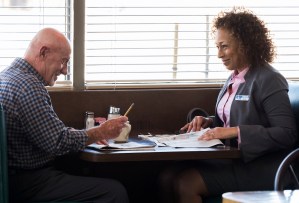 The episode opens with a flashback of Mike’s late son Matty as a kid watching his dad pour concrete in the family driveway, and that’s tied to the grief therapy group Mike has been attending since last season. During a diner breakfast with fellow group member Anita (she helps him with his crossword, it’s cute), she mentions wanting to reach out to Henry, another guy in their group. But Mike tells her not to bother; Henry’s making his whole sob story up. Mike points out inconsistencies in his stories about his dead wife Judy — “Wrigley Field didn’t get lights until ’88” — and has noticed that Henry rubs his wrists whenever he lies. “You have a very suspicious nature,” Anita adds, but they agree to a ten-buck wager on whether Henry’s telling the truth or not.

At therapy, Mike’s daughter-in-law Stacey confesses she’s worried that she’s starting to forget about Matty, and Mike is visibly moved, grimacing and breathing heavily. So he’s already wound up when Henry starts taking about Judy’s dreams of going to Australia… and rubs his wrists. Mike scoffs aloud: “This guy was never married.” He accuses Henry of lying “and loving every minute of it,” and when he threatens to search for Judy’s obituary, Henry gets up and leaves in a huff. Then Mike turns and attacks the rest of the group for not noticing, because they’re “all wrapped up in your sad little stories.” (Ouch.) Circling back to a flash-forward we saw earlier, Mike tersely tells the stunned group: “You wanted me to talk. I talked.”

Mike’s not done yet, though: He also has a late-night standoff with Gus, who wants to know if Mike has something to tell him. “Nacho Varga,” Mike replies, surprised that it took Gus this long to figure it out. Gus isn’t happy that Mike knew Nacho was working against Hector, but Mike fires back that he “never promised to be Salamanca’s bodyguard.” As usual, he cuts through all the BS: “You brought me here because you have an ask. So why don’t you stop running a game on me and just tell me about the job?” Yeah, Gus, spit it out already. 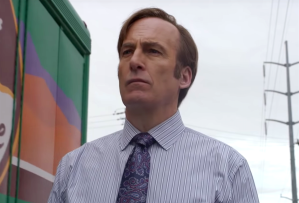 PRIVATE CALL | Jimmy turns down another job offer, this time for a shift supervisor at a cell phone store. But when Kim suggests he “should talk to someone” about Chuck, he blurts out that he’s too busy with his new job, and scrambles to accept the cell phone store offer. His first day at work, though, is a bit of a letdown. He dutifully dons a nametag and fluorescent green vest and painstakingly polishes the display case of state-of-the-art flip phones… but the store is depressingly empty. After a few hours of no customers, he asks his new boss for help, but the guy tells him that’s not unusual for that location. So Jimmy resorts to killing time by bouncing a ball against the windows.

He does sneak out, though, to meet Ira, who gives Jimmy his half of the proceeds from last week’s Hummel heist. It’s more than Jimmy expected, too. (The Bavarian Boy figurine sparked a bidding war, apparently.) Jimmy says he’ll have more work for Ira in the future, but Ira tells him his number will be changing, since he never keeps the same cell phone for more than one job. That sets off a light bulb in Jimmy’s entrepreneurial mind, and he returns to the cell phone store to paint on the windows in big, colorful letters: “Is the Man Listening? Privacy Sold Here.” Paranoia is a great sales motivator, after all. 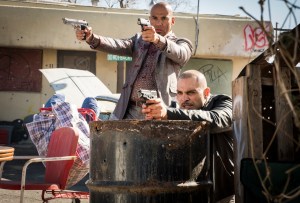 KILLIN’ COUSINS | A still recovering Nacho gets more than he bargained for when he points out the silver car of a rival drug slinger as the one who ran him and Arturo off the road in the desert. (A lie, of course.) The silver car is parked at a highly fortified drug den located at an abandoned motel, but that doesn’t stop the Cousins. Once Nacho tells them, they don’t hesitate: They grab a bag full of weaponry and march right into the den, laying waste to everyone in their way. (Some nice directorial work from John Shiban here, as Nacho can only see glimpses of the carnage through a covered fence.) When Nacho spots more enemies pulling up, he stumbles over and plugs one of them in the chest. He slowly makes his way inside the den, and sees dead bodies everywhere — the Cousins’ handiwork.

One Cousin is pinned down and running out of ammo, but just as Nacho steadies himself to enter the fray, the other Cousin pops up behind him, mowing down every bad guy still standing. It’s a successful mission, but later, in a dark warehouse, Nacho groans, clutching a wound he reopened in the firefight. (Uh-oh.) A pleased Gus tells him “they cleared out the Espinozas,” and the Cousins have fled back down to Mexico to lay low. Nacho sniffs out that this was just a play for territory, but Gus only tells him to “get some rest… you have more to do.” Nacho ends up taking refuge at his dad’s house, still hurting badly, but pleading with him not to call 911: “I won’t be safe if you do.” 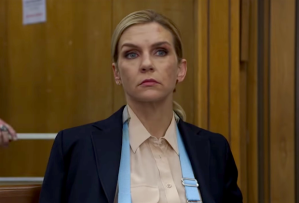 * Kim spent the week in the gallery of a judge’s courtroom, “just observing,” as she told him. The judge called her into his chambers, first telling her he has a case for her: a pregnant woman who had a bad reaction to anesthesia and fell into a coma. But, as Kim correctly pointed out, that’s the plot of the Paul Newman legal drama The Verdict. The judge then told her to just move on, that she “won’t find any ‘save the broken lawyer’ cases” in his courtroom. But when he came back from recess, she was still there. Just observing.

* We got more of Mike the Persnickety Security Supervisor, barking at a Madrigal employee for frayed straps in the cargo hold of a delivery truck and boxes marked “Do Not Double Stack” that were clearly double stacked. We’d do what he says, nameless Madrigal guy.

* I’m rooting for Mike and Anita… but it doesn’t bode well that she’s nowhere to be found in Breaking Bad, does it?

* I’m officially worried about Nacho. The chances he survives this season are dropping precipitously each week.

* Always nice to see Marc Evan Jackson, the great character actor from Brooklyn Nine-Nine and The Good Place who played Henry the lying griever. Will we see him again, and get confirmation that Henry made it all up? Mike still needs to collect that ten bucks!