This week’s Better Call Saul was eventful, to say the least — but before we get to gunshot wounds and Hummel figurines, let’s talk about that very substantial Breaking Bad Easter egg, shall we?

After a bloody assault on the Salamancas (we’ll fill in those details later), Juan Bolsa calls Gus, concerned about their overall security. He wants to send out dummy loads for a while to ensure they’re safe, but Gus warns him that their dealers will run out of meth in less than a week. Bolsa orders him to find a local supplier in the meantime — even though “Don Eladio forbids buying from outsiders,” as Gus reminds him. So the Chicken Man heads to a local university to find a familiar face… and voice. 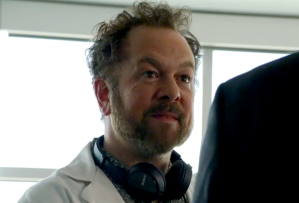 In one of the school’s chemistry labs, Gus finds… Gale Boetticher! Yes, it’s the charmingly dorky meth cook who preceded Walter White on Breaking Bad. Gale is (of course) singing the periodic table of elements to himself as Gus arrives, and tells Gus he’s tested the meth samples he gave him, which range from 39 to 67 percent pure. “These samples aren’t great. In fact, they’re not even good,” Gale tells him, adding: “I could do much better.” Gale is eager to help, but Gus politely turns him down, for now: “You were meant for better things.” (You’ll get your chance soon, Gale.) Gus leaves, and Gale goes back to happily singing about plutonium and titanium.

Gale’s surprise cameo is the “Oh, wow!” highlight of the night, but a whole lot happens outside that chemistry lab, too: 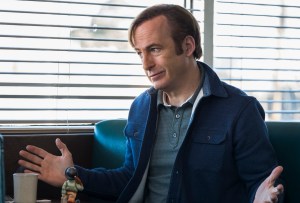 THE MERRY WANDERER | Jimmy grabs a diner booth with Mike and pitches him on a Hummel figurine heist: Mike would sneak into the copier sales office and snatch the valuable Hummel that Jimmy spotted last week, swapping in a similar-looking one that’s not worth nearly as much. “Let’s do something beautiful here,” Jimmy urges him, but Mike says no: “It’s not for me.” He doesn’t think Jimmy should do it, either, and also offers his condolences about Chuck. But Jimmy races right past that, and turns to his crooked veterinarian to get a reference for someone to take Mike’s place.

He hires a bearded burglar to bust into the copier office and make the swap, and the guy does it — but gets trapped hiding under a desk when the boss Mr. Neff emerges from the executive washroom. He’s sleeping on the office couch with a bottle of booze (his wife kicked him out after Neff bought her “a very, very expensive vacuum” as a gift, apparently), and when he orders a pizza and settles in for the night, the burglar calls Jimmy for help. So Jimmy has to get out of bed and head down there, setting off Neff’s car alarm to draw him out to the parking lot. Neff comes right back in, though, so Jimmy’s forced to break into Neff’s car and send it drifting through the lot in neutral. That’s enough of a distraction to allow the burglar to emerge undetected… and with the valuable Hummel in hand. 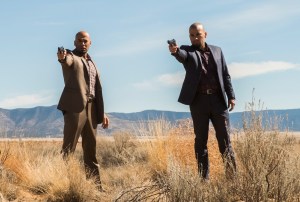 NACHOS ROJOS | Now that he’s under Gus Fring’s thumb, Nacho has to tag along while Victor and Tyrus stage an elaborate crime scene to cover up Arturo’s death. They speed a car right over a metal spike strip, blowing out the tires, and then plant Arturo in the driver’s seat and put a few dozen bullets in him and the car. They’re not done shooting, either: Nacho climbs into the passenger side, and Victor plugs him in the shoulder to complete the ruse. But just when Nacho thinks he’s done, Tyrus shoots him again in the gut: “Gotta make it look real.” They flee the scene while a bloodied Nacho dials for help.

When The Cousins arrive on the scene, they find Arturo dead, and Nacho halfway there himself. Nacho says he doesn’t know who did this, and they hustle him off to that same veterinarian. (One of The Cousins actually brushes past Jimmy in the waiting room.) The vet patches up Nacho as best he can, but warns that he might be facing a life-threatening infection, so he might want to see a real human doctor in the near future. Oh, and “I never want to see you again,” he warns Nacho. Pretty sure Nacho doesn’t ever want to see you again, either, doc. 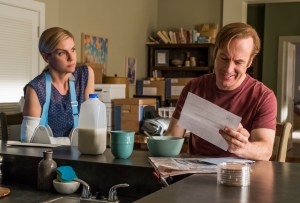 * In a powerful final scene, Kim showed Jimmy the letter Chuck left for him. Jimmy nonchalantly opened it and began reading it aloud — and it was a sweet letter, actually. Chuck acknowledged that “we have not always seen eye to eye,” but added that “nothing will ever change the face that we are brothers.” He congratulated Jimmy on getting his life together: “I’m proud we share the name McGill.” But Jimmy read all of this matter-of-factly, like he was reciting a grocery list, and while Kim was moved to tears by Chuck’s kind words, Jimmy was utterly unfazed. In fact, he ended up being the one comforting Kim. Does Jimmy’s empathy switch just default to “off” whenever Chuck’s name comes up?

* Kim also went back to work at Mesa Verde, and was visibly unnerved by the “aggressive” expansion of new branches they were planning, but we’re burying the lede here: Kim’s new paralegal Viola is played by none other than Keiko Agena, aka Gilmore Girls‘ Lane Kim! Viola seems like a detail-oriented go-getter, so I’m sure these two will get along just fine.

* Last week, I speculated that Jimmy’s Hummel scheme would probably be more clever than a simple break-in, but it wasn’t really, aside from the figurine swap. Does he have more of these in mind? (At a certain nursing home, perhaps?) Or was he just trying to stick it to Mr. Neff one last time?

* For more on Gale’s surprise cameo, head back to TVLine tomorrow morning at 8 am ET, where I’ll have a Q&A with Gale himself, David Costabile, about his return to the Breaking Bad universe… and memorizing that song about the periodic table. (Spoiler alert: It wasn’t easy.)

Got thoughts on Gale’s appearance? Jimmy’s reaction to Chuck’s letter? Nacho’s near-death experience? Drop ’em in a comment below.