Jimmy jumped right back into the rat race this week on Better Call Saul… before contemplating a less legitimate way to make a buck.

Kim wakes up to a disturbingly chipper Jimmy making freshly squeezed OJ and preparing to go out on a series of job interviews. She tries to tell him he can take some time off, but he plows right past that… along with any residual feelings he might have about Chuck’s death. (He also blows off a “meeting” with Howard that Kim asks him about.) He interviews for a job selling copiers, impressing the bosses with his knowledge of the equipment from his days in the HHM mailroom. He also admires the late owner’s extensive collection of Hummel figurines — a callback to when he helped that old lady Mrs. Strauss arrange her Hummel-heavy estate back in Season 1. 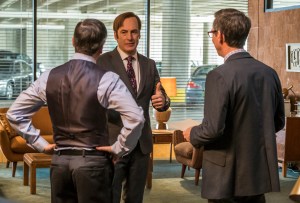 Jimmy makes a great impression, explaining away his years as a lawyer by arguing that being a lawyer essentially is a sales job. (He’s selling hard here, actually.) And when they thank him for his time and send him away without a decision, Jimmy lays it on even thicker, asking them to hire him right away. They consult for a minute, and then offer Jimmy a handshake: He’s hired. But he stops them right there: “Are you out of your mind?” He scolds them for being dazzled by his slick presentation and not doing a thorough background check: “I could be a serial killer! I could be a guy who pees in your coffee pot! I could be both!” He rejects their job offer… and even calls them “suckers” (!) on his way out.

Meanwhile, Kim heads to the HHM office for that “meeting” with Howard, where he and Chuck’s ex-wife Rebecca are settling Chuck’s affairs. As the executor of Chuck’s estate, Howard offers Kim a chance for Jimmy to collect anything of sentimental value he might want, but she stops him: “Jimmy doesn’t want any of it.” She also scoffs at what Chuck left Jimmy: a mere five grand. (“It’s what you give when you want to cut someone out of a will, but not have it contested.”) After Rebecca leaves, an infuriated Kim explodes on Howard for implying to Jimmy that Chuck killed himself. (He didn’t imply that to Rebecca, she notes.) Howard gives her a letter that Chuck left for Jimmy, which she guesses is “one last ‘Screw you, brother’ from beyond the grave.” Howard asks what he can do, but she tells him to “just stay away.”

Back at home, Jimmy doesn’t tell Kim the truth about his job interview — he says he got an offer, but “it just didn’t feel right” — and she doesn’t tell him about the letter from Chuck. Instead, they cuddle up to watch the old James Cagney gangster flick White Heat together… but in the middle of the night, Jimmy gets out of bed and turns on the computer. He finds the Hummel figurine he saw at the copier office selling online for nearly nine thousand bucks, and a light bulb goes off. He calls Mike, and leaves him a message: “I’ve got something for you. A job.” Hmmm… has Jimmy calculated that stealing Hummels might be more lucrative than selling copiers? 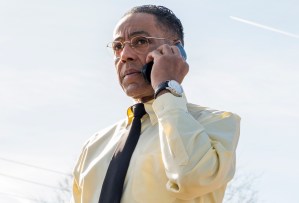 BREATHE EASY | Gus is closely monitoring Hector’s recovery, sending goons into the hospital to keep tabs on the old man. Hector is unresponsive, and may never recover, but a henchman suggests to Gus he might improve with attention from a doctor from somewhere prestigious like Johns Hopkins — and next thing we know, a Johns Hopkins doctor arrives to take over Hector’s care, thanks to a “generous grant.” (As Gus declares, “I decide what he deserves. No one else.”) The Cousins are there to keep vigil, and the new doc tells them — and Nacho and Arturo — to talk to Hector to teach his brain to rewire itself. With The Cousins looking on, Nacho reassures Don Hector he’ll be back on his feet soon… even though Nacho’s the one who knocked him off his feet in the first place.

Backed up by Nacho, Arturo decides to play hardball during a nighttime drug handoff with Victor and Tyrus: When they present him with five kilos, Arturo tells them they were expecting six. And they’re not leaving without six. A tense standoff leads to Nacho cocking his pistol… and Victor backing down and adding a sixth kilo to the pile. Nacho and Arturo leave triumphant, but as they return to their car, Gus pounces on Arturo, wrapping a plastic bag around his head to suffocate him while he’s hogtied. “I know what you’ve done. The Salamancas do not,” Gus tells Nacho as Arturo gasps for breath. “From now on… you are mine.” He leaves Nacho to contemplate his new situation as he watches his friend take his last breath.

* Mike got an earful from Lydia about his surprise inspection at Madrigal last week, but he explained he’s laying the cover for his “security consultant” title. He plans on doing the same at Madrigal’s seven other facilities, too. She asks him to reconsider, but he shrugs her off, and Gus has his back: When Lydia calls Gus to complain, Gus tells her to just get Mike a badge and be done with it. Save a break room donut for Mike!

* Nacho also told his disapproving dad that he doesn’t have to pay off Don Hector anymore, and he’s “working on” getting out of the criminal underworld. Gus might have something to say about that, though.

* What’s Jimmy scheme with the Hummels, exactly? Will he recruit Mike to sneak into nursing homes and snatch them out of old ladies’ collections to sell them for a massive profit? It’ll probably be more clever and subtle than that, I’m betting.

* Interesting that Jimmy and Kim were watching White Heat, which has a famous scene where James Cagney’s character freaks out when he learns his mother has died. We’re still waiting for that kind of scene from Jimmy… but will we ever see it?

* Gotta admire Gus Fring for doing his own dirty work. He could’ve handed off suffocating Arturo to Victor or Tyrus, but the man still likes to roll up his sleeves and handle his own (deadly) business. As Victor will learn soon enough…