Warning: This post contains spoilers for Monday’s Better Call Saul, so if you haven’t watched yet, you know… tread lightly.

Well, that cameo was a bit of TV gold, wasn’t it? (Or maybe TV titanium, or TV magnesium…) 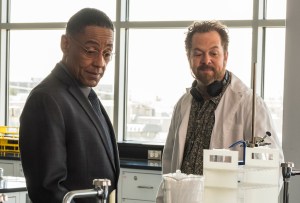 This week’s Better Call Saul dropped one of its most delightful Breaking Bad Easter eggs yet, as Gus Fring visited a local university to consult chemist (and future meth cook) Gale Boetticher. True to dorky form, Gale was singing a song naming the periodic table of elements when Gus arrived, and informed Gus that his current meth suppliers were pushing inferior product. “I could do much better,” he added, volunteering his services, but Gus turned him down: “You were meant for better things.” Of course, we know we’ll soon see Gale whipping up meth in Gus’ Superlab… and working with Heisenberg himself, Walter White.

Gale’s return was actually years in the making, according to David Costabile, who reprised his Breaking Bad role in last night’s episode. He had breakfast with Saul executive producer Peter Gould in Albuquerque back when Saul was still shooting its first season, “and he was like, ‘We should have you back on the show,'” he tells TVLine. “I thought he was just being nice,” he adds with a laugh. “‘You were on that other show that was such a big hit for us, and we shot you in the face, so you might as well come on back and be alive!'”

Costabile sees Gale’s appearance here as “a launching pad” for the character’s arc on Breaking Bad, since it highlights “his interest and pursuit of excellence, and the rigor that it demands of one’s self to get to excellence… He delights in how difficult chemistry is, because it has to be done the right way, or it’s not going to succeed.” The “shoddy craftsmanship” from the other meth cooks offends Gale’s sensibilities, he says: “He’s like, ‘That’s not OK. You can’t go through life like that. You just mustn’t. You mustn’t allow yourself to not do your best.’ And I think that’s who that character is.” 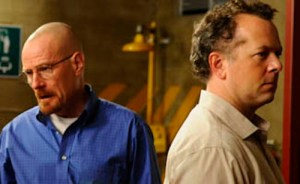 So could we see more of Gale and his impossibly high standards in future episodes of Saul? (After all, we haven’t seen the Superlab up and running yet.) Costabile is tight-lipped: “Are you kidding me? Those AMC thugs will come and get me, trust me.” (He doesn’t want to get shot in the face again, understandably.) But he does leave the door open for an encore performance as Gale: “It will remain to be seen how the story develops… and how it would or could collide with those other stories.”

The real question, though: How much time was Costabile given to memorize the lyrics to “The Elements,” that catchy laundry list of elements Gale was happily singing? “Not long enough!” he laughs: “I spent every single waking moment from the second they told me that that was going to be the f–king song, until the f–king moment that we shot it.” He wanted to make sure it seeemed “offhand,” too, since Gale obviously knows the song well, and “the only way that can be is if you’ve sung it a million times.” As a result, he can now sing the song “at any speed: slow, fast, stick a pencil in my eye… I can sing that song. I am ready.”

Not only did he have to sing that song, he had to convincingly perform a chemistry experiment… and, oh yeah, act opposite Giancarlo Esposito. “It was like a juggling act on a high-wire,” Costabile marvels. “It was a perilous, devious thing that those writers gave me. They are sadists of the highest order.” He’s just kidding, Saul writers… don’t let this keep you from bringing Gale back. (Please.)

What did you think of Gale’s surprise return? Drop your thoughts on that, and Season 4 of Saul so far, in the comments below.