Talk about a thirst trap.

We’ve got your exclusive first look at Midnight, Texas‘ Season 2 poster, which looks like the NBC drama isn’t wasting any time delivering on a promise to be “soapier, sexier, scarier and more salacious” in its sophomore outing.

In the key art, which you can peruse below, Manfred lies at the center of a supernatural cuddle puddle taking place on a blood-red backdrop. He’s surrounded by his paired-off friends… with a couple of surprises. Lovebirds Fiji and Bobo smolder in the bottom right corner, while newlyweds Olivia and Lem fill the top left.

You’ll also notice that another recent Midnight transplant, hotelier Patience (Veronica Mars‘ Jaime Ray Newman) has her hand splayed possessively over Manfred’s bicep like she’s about to win one of those touch-a-car contests — and her husband, Kai (Lost‘s Nestor Carbonell) is nowhere to be found.

And what about Creek and The Rev? As previously reported, former series regulars Sarah Ramos and Yul Vazquez will be around in Season 2, but only as guest stars.

Midnight, Texas returns for Season 2 on Friday, Oct. 26 (9/8c, NBC). Scroll down to take a good look at the poster (click on the image to see it larger), then hit the comments with your thoughts: Are you thirsty for more Midnight? 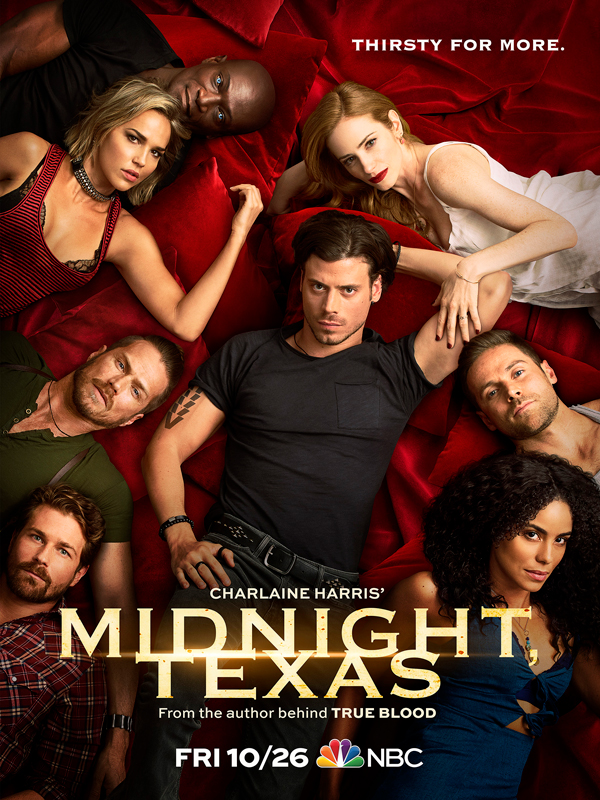