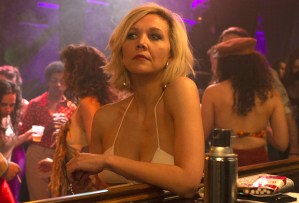 Simon confirmed the news with a tweet on Thursday, thanking HBO for giving his show a chance “to tell its full story”:

We're always conjuring the last scene before we write the first. So much the better when we work for people who allow us to consistently plan, arc and execute as intended. Thanks, @HBO, for the third and final season renewal and the chance for #thedeuce to tell its full story. pic.twitter.com/B1cOuady1X

Debuting last September with an eight-episode freshman season, The Deuce was renewed soon after for a nine-episode second season, which kicked off earlier this month with a premiere that jumped forward several years to 1977. It currently airs Sundays at 9/8c on HBO.

Insecure and Ballers also earned renewals at HBO earlier this month — for a full rundown of what’s renewed and what’s cancelled on cable, check out TVLine’s Cable TV Renewal Scorecard.