Vincent is grinding, Eileen is growing and Frankie is pulling the same stupid stunts he did in Season 1: Welcome to The Deuce Season 2.

The HBO drama returned Sunday with an hour that brought us up to date on many of Season 1’s Times Square denizens. Staying true to the character-study nature of the series, not a lot — aside from a time jump to 1977 and some slick disco moves — happened.

Which is not to say that the episode, titled “Our Raison D’etre,” was boring. Read on for a quick update on the pimps, their women and everyone else.

VINCENT | The more stand-up of the Martino twins has a new disco, Club 366, which is a success and a frequent hangout for Eileen, Lori, C.C. and such. (It’s also backed by the mob, like Vincent’s other business ventures.) Vincent’s still dating and living with Abby; they seem happy. He spends most of the episode looking for Frankie, for reasons that will become clear in a moment or two. 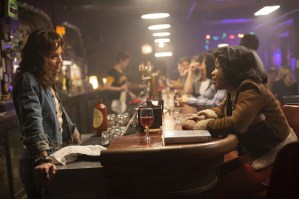 ABBY | Vincent’s girlfriend is managing the Hi-Hat, dabbling in labor struggles (she hires an exotic dancer who was fired when she tried to unionize the dancers) and really getting into the burgeoning punk rock scene. At the end of the episode, as Vincent slips into bed after a long night overseeing his businesses, he and Abby have a conversation that indicates that fidelity may have been an issue in their relationship in the past, but she’s OK with it, “just as long as we don’t lie to each other.” They make love.

FRANKIE | Frankie manages Show Land, a sex emporium, but can’t stop borrowing money from its coffers to pay off his gambling debts. When he boldly nabs $10,000 and then disappears, Vincent is livid. Near the end of the episode, Frankie shows up at Club 366, dancing with a blonde woman who calls herself Christina Fuego. Turns out, they’re married, and Frankie used the cash to buy her a ring. Though Vincent is initially irked, he eventually chooses to forgive his brother’s debt and calls it a wedding present to the pair. 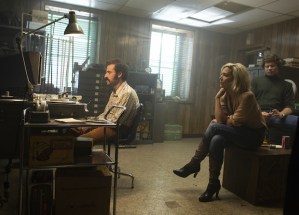 EILEEN | The Artist Also Known as Candy has made a name for herself in the adult-film scene, but she’s frustrated when Harvey (who is half the size he was last season) shuts down her ambition to make more artistic films that take into account the female perspective. “Guys don’t want to be in women’s heads,” Harvey tells her, but relents a bit when she wants to try something different with the climax of one movie.

EVERYONE ELSE | Lori is a porn star now, but she’s still turning tricks, and C.C. isn’t afraid to hustle film producers in order to get them both more money — though C.C. really doesn’t like it when Lori repeatedly contradicts him in front of others… Darlene got her GED in secret and is working her way through Toni Morrison’s Song of Solomon… Paul is managing a gay bar but wants to open his own establishment, independent of the mob… Alston has been promoted to homicide detective and is dating a nurse; he’s approached about helping Mayor Koch’s endeavor to clean up midtown Manhattan.

Now it’s your turn. What did you think of the episode? Grade it via the poll below, then hit the comments with your thoughts!