Last Man Standing will be down yet another fan-favorite this fall. Mike’s father Bud (played by veteran actor Robert Forster) will have passed on when the Tim Allen sitcom returns for Season 7, TVLine has confirmed. 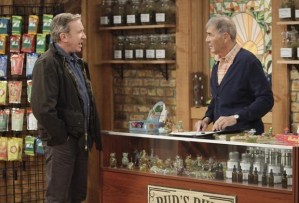 As longtime fans will recall, Bud ran a pot dispensary in Denver named — wait for it! — Bud’s Buds, which Mike loathed. His father’s legacy will live on throughout the Fox revival, as another member of the family steps in to oversee the business. “Ryan will be taking over the daily running of the shop,” exec producer Kevin Abbott tells TVLine.

Forster was once a frequent presence on the ABC incarnation of Last Man, putting in nine appearances as the Baxter family patriarch. Bud last showed up in the Season 4 episode “Mandy’s Party,” which aired back in March 2015.

As well documented by now, Last Man Standing was cancelled by ABC back in May 2017, only to be revived a year later by Fox. In addition to Allen, returning series regulars include Nancy Travis (Vanessa), Amanda Fuller (Kristin), Jonathan Adams (Chuck), Christoph Sanders (Kyle), Jordan Masterson (Ryan) and Hector Elizondo (Ed). Kaitlyn Dever will recur as youngest daughter Eve.

In other casting news, Molly McCook (The Ranch) will succeed Molly Ephraim in the role of middle daughter Mandy, while Jet Jurgensmeyer (black-ish) will replace Flynn Morrison as Kristin and Ryan’s son Boyd. Last but not least, Krista Marie Yu (Dr. Ken) has been cast in the recurring role of Jen, a foreign exchange student who comes to stay with Mike and Vanessa. Exclusive details were first reported here.