ABC has begun to answer the lingering question, “What will The Conners look like without Roseanne Barr?”

The network on Friday released a photo from the upcoming Roseanne offshoot’s first table read, which features all of the sitcom’s principal actors — except Barr, of course, who will not be involved in the comedy at all following the racist tweet that led to her firing.

Featured in the photo are stars Sara Gilbert, Michael Fishman, John Goodman, Laurie Metcalf and Lecy Goranson, as well as Jayden Rey, Ames McNamara and Emma Kenney, who TVLine exclusively reported will be back as series regulars for the spinoff.

ABC also released a new promo for The Conners: It doesn’t feature any new footage from the series, but it winks at the controversy surrounding the show with a close-up of the family’s iconic couch and the Carly Simon hit “Anticipation” playing in the background. Watch it here:

In a recent interview with The Sunday Times, Goodman hinted at how The Conners might handle Barr’s absence from the show, suggesting that her character may have died offscreen.

Goodman also said in the interview that he knows “for a fact that [Barr]’s not a racist,” adding that he was “surprised” at ABC’s decision to cancel Roseanne altogether following Barr’s tweet.

The Conners premieres Tuesday, Oct. 16, at 8/7c on ABC. View the production photo below, then hit the comments with your thoughts. 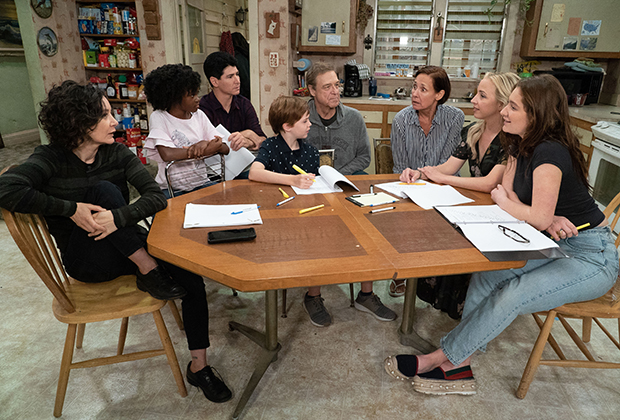