The following contains spoilers from Sunday’s episode of The Affair. Fall behind? Read the previous Affair recap here.

Alison is gone but not forgotten in the Season 4 finale of The Affair. The episode is told from three perspectives, and finds Noah, Cole and yes, even Ben, in attendance at Alison’s funeral.

We begin at Princeton, where Noah and Anton are sitting in on a creative writing seminar taught by Noah’s friend, Professor Ariel Hoffman (The West Wing‘s Janel Moloney). She attempts to introduce her very special guest but gets interrupted by one of her students. “Noah F—king Solloway!” he exclaims. He says that Noah inspired him to become a writer, then a fellow pupil interjects to tell Noah that Alana — a character from Descent that he based on Alison — is her favorite contemporary female character. Ariel then introduces everyone to Anton. A fellow black student is the first to greet him, then the rest of the class, comprised of white students, tell Anton that he’ll like it at Princeton because it’s “pretty woke.” They fill him in on the student body’s recent efforts to have a segregationist’s name removed from the school of public policy, and it’s super awkward. Ariel cuts them off to give the class the day’s assignment: a character sketch based on someone they know. 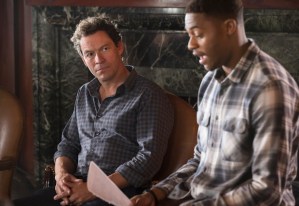 While the students are hard at work, Noah and Ariel catch up outside. There’s an obvious spark between them, but their moment has come and gone. He fills Ariel in on his two failed marriages and Alison’s demise. Ariel’s iPhone dings to remind them that 15 minutes have passed, and the kids should be wrapping up inside. Anton is first to present what he’s written. It’s about Noah, and what begins as a collection of flatteries ultimately delves into Noah’s personal life and potential sociopathic tendencies. At one point, the piece touches on race. “Do you have to be white to move through the world like that, with that kind of confidence?” Anton asks. “Or is it something else? Some kind of sociopathy, maybe?” Noah storms out, and Anton follows, explaining that he wrote what he did because “that’s what they wanted… they ate that s—t up.” Anton says that he understood the role his predominantly white peers wanted him to play, and he went with it. Noah’s angry, but Anton knows it has nothing to do with him. Alison just died, and Noah shouldn’t be here. He encourages him to make his way to her funeral.

We then move on to Cole, who’s an absolute mess on the morning of Alison’s service. We catch a glimpse of him sitting on the floor of the shower, then cut to him unable to answer Luisa when she asks if he’ll ever unpack the bags he took with him to California. Later, Cole, Luisa and Joanie head to the funeral. He pulls up towards the church, then Luisa reminds him that Athena has taken it upon herself to undo Cole’s arrangements and have Alison’s service on the beach. There, he confronts his ex-mother-in-law about cremating Alison when the plan was to have her buried alongside Gabriel. Athena defends her decisions, suggesting that Cole is no longer Alison’s family and the choice is not his to make. Furious, he yells, “She’s my wife!” Unbeknownst to him, current wife Luisa is standing right there. 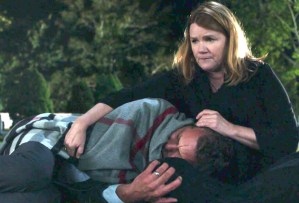 Once all the mourners, including Noah and Ben, arrive, Athena asks that Alison’s urn be passed around so everyone has a chance to say goodbye. When it comes time for Cole to speak, he grabs the ashes and takes them to their intended burial site. Noah eventually catches up to Cole and suggests that he return the urn to Athena, but Cole doesn’t budge. Once Noah leaves, Cole falls asleep and dreams of an intimate moment with his ex. He’s eventually woken up by Cherry, who’s come to console him. There, Mom reveals that she sent Cole to California knowing full well that he’d eventually meet his father’s mistress. Cole, who believes himself to be just like his dad, wonders if he, too, is capable of killing himself. Cherry assures Cole that he’s strong like her, and as hard as this moment may be, he’ll eventually find a way to live without Alison.

Cole eventually returns home to Luisa, and the marrieds mutually agree that their relationship is over. He apologizes for everything he’s put her through, then offers to stay married so she can apply to become a U.S. citizen and Joanie’s legal guardian. Luisa questions the potential arrangement, but Cole tells her not to worry. The following morning, he takes Joanie on a road trip so father and daughter can properly mourn the loss of Alison. 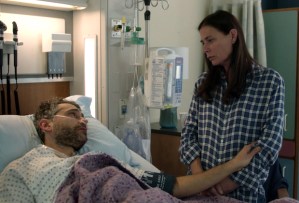 We then cut to Helen’s POV. Two weeks have passed since Alison’s funeral, and Vik is in the hospital recovering from a gallbladder infection brought on by his metastasizing tumor. His oncologist, who also happens to be his former med school sweetheart, suggests that he’s being selfish by choosing not to undergo chemotherapy and improve his quality of life.

Helen returns home to get a change of clothes and finds that Whitney and her vegan boyfriend have popped in for a surprise visit. Whitney offers to make a traditional Indian dinner for Vik, unaware that he’s in the hospital with Stage 4 pancreatic cancer. Helen breaks the news to her daughter, who immediately falls back into old rhythms with the whole “woe is me” routine. Not once does she ask how her mother is doing. A fed-up Helen tells Whitney to stop being a bitch and accept reality, then Sierra walks in at the worst possible time. Once the bratty teen and her boyfriend leave, Helen tells Sierra that their little rendezvous in the desert was a one-time thing. She then receives a phone call from the hospital, informing her that Vik is now septic. The ladies hightail it down to the intensive care unit, but the doctor won’t let them in without a pass. Sierra suddenly feels nausea, then reveals that she’s pregnant… with Vik’s baby. (Yep, called it!)

An overwhelmed Helen storms out to smoke a cigarette. Noah joins her, and the exes work through their guilt. Noah expresses remorse over Alison’s death, while Helen wonders if she’s been using Vik all these years to fill the hole in her life left by Noah. Noah assures Helen that she loves Vik, and that no two relationships ever feel the same. She returns to Vik’s hospital room to find that he’s no longer on a breathing machine, and the ailing surgeon apologizes for putting her through this. She tells him to stop apologizing, suggesting they’ve done the best that they could given his grim prognosis.  And while he’d like to go back to the way things were, in his mind, he’s already dead. Helen climbs into his hospital bed to comfort him, whispering “I love you” into his ear.

Afterwards, Helen heads out to the waiting area. She finds Sierra and tells her to confront Vic. As the episode draws to a close, Sierra heads in to tell him about the pregnancy, while Helen heads up to the roof to take in the sunset.

What did you think of The Affair finale? Grade it via the following poll, then hit the comments with your hopes for the fifth and final season.