The following contains spoilers from Sunday’s episode of The Affair. Fall behind? Read the previous Affair recaplet here.

“You haven’t gotten to the end of the story,” Showtime president David Nevins noted at TCA last week, the day after Alison’s shocking demise on The Affair. “It’s always about the ripples.” Added programming chief Gary Levine, “As in all things with The Affair, things are not always what you are told or what they seem to be. So there’s some really interesting story to follow.”

And that, there, is in the penultimate Season 4 episode, which hit the rewind button and revealed that Alison didn’t die by suicide. She was killed. 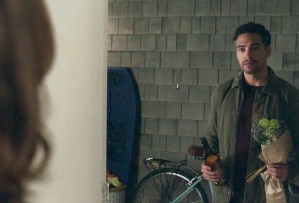 As the episode starts off, Alison has returned from Los Angeles. Ben pays her a visit to come clean about his marriage, and she tells him that she already knew. Ben says he’s left Heidi and his two sons to be with her, one of whom is named — gulp! — Gabriel. Alison thanks Ben for telling the truth, but doesn’t forgive him. She instead takes Helen’s advice and stands up for herself, telling the latest adulterer in her life that she’s lived this story before and can’t go through it again. But when he offers to fix her leaky faucet, she lets him stay and thanks him by offering to cook dinner as a thank you. He quickly takes over in the kitchen and begins making pancakes.

As Ben is cooking, he tells Alison how his PTSD put a strain on his marriage. (In Iraq, he accidentally shot and killed a teenager who pointed a hollowed-out RPG at his crew.) When he returned home, he resented the way Heidi looked at him and in turn developed a drinking problem. One night, he came home drunk and tied Heidi to their bed, face down, and forced himself on her. He refused to let her go, even when his son started to cry. Ben says he’s never told anyone else about that last part.

Afterwards, Alison tells Ben the whole truth about her son’s death and how it could have been avoided. She then brings up a recurring dream where a teenage Gabriel wants her to leave his bedroom. “Some days I’m proud of the life that I’ve built… and I think [Gabriel] would be proud of me, too,” she says. “And then sometimes, it all feels like a giant charade, and I’m still the same broken person I was at the hospital, the same empty shell I was at his funeral, and this is all a joke I’ve been playing on myself.” She goes on to tell Ben about Athena’s belief in reincarnation — how we all live multiple lives, and we “keep coming back until we get it right. Maybe this is as far as I come in this life?” she says. Alison and Ben proceed to make love, and he promises that he’ll never break her heart. They cuddle, then she gets up to do the dishes. The faucet, however, is once again broken, and there’s a knock at the door. At first, it seems like history’s repeating itself, but we soon realize that nothing we’ve witnessed so far actually took place. This was all a figment of Alison’s imagination. It’s what could have been… or so it seems. 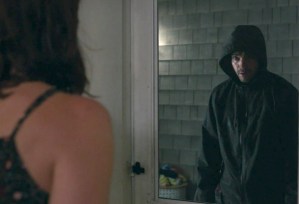 For the first time (ever?), the second part of our story is also from Alison’s perspective, only this time we’re finding out what actually happened. Ben enters in a bad mood, then gives her grief for going to California. He insists they proceed with their dinner plans, but Alison insists they stay in and talk. She goes on to ask about his living situation, and he raises his shield. He proceeds to lie about living alone, being married and having kids. He then ventures towards Alison to console her at the stove, and insists she’s trying to sabotage a good thing.

Alison walks towards her balcony to look out towards the beach. She then has a one-sided dialogue about where things went wrong with Cole and Noah, and how she never took any of the blame when those relationships went south. She doesn’t want history to repeat itself, and that’s the risk she’d be taking with Ben. She pleads with him to be honest with her, but when she goes to touch his face, he slaps her hand away. He gets up from the couch and and pours himself a stiff drink, throwing away his sobriety. He proceeds to tell her what happened in Iraq, only this time it’s revealed that he knew the teenager had a useless RPG when he shot him.

Ben is on his third or fourth glass of whiskey before Alison suggests that it’s time for him to leave. She makes clear that she doesn’t want to be with him, then shows him the door. He instead moves back to the couch and says he needs her because he’s in so much pain. She touches his shoulder in hopes that consoling him will calm him down and get him out the door. Instead, he sees it as a chance for reconciliation, and says they’ll be good together, at which point Alison gets up and demands he go home to his wife. This triggers Ben, who jumps up and asks how she knows about Heidi. Alison tells him that she met his wife at his office last week, but swears she didn’t say anything. He then proceeds to threaten Alison, but she cuts him off before he gets too far. She opens the door again, but he slams it shut. 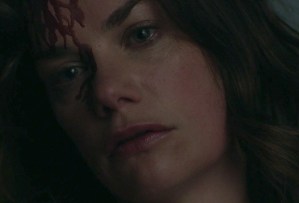 There, Ben says he never wanted any of this, and accuses Alison of seducing him despite being aware of his drinking problem. “Say this is your fault, and then I’ll leave,” he demands. But she doesn’t owe him anything, she says, and tells him to “get the f—k out of my house before I call your f—king wife.” He then lunges at her, pushing her up against a wall in an attempt to strangle her. She knees him in the crouch, then makes a beeline for the door. Ben catches up to her and throws her head-first into a cabinet, where she cracks her head on Athena’s statue. Blood pours down her face, and she begins to lose consciousness.

We then see Ben carry Alison out towards the water. She’s semi-conscious, and able to make out the lighthouse from afar. We hear Alison’s inner monologue. “What are you gonna do, Ben? You gonna kill me?” she asks. “You think that scares me? My son died. He died in my f—king arms.” Ben proceeds to toss Alison into the ocean, before her voiceover continues. “What in God’s name do you think you can do to me that I haven’t done to myself a million times? I have been in pain my entire life. And maybe that’s what makes people think that I’m weak. And maybe that makes people treat me like some sort of receptacle for all their grief and rage and disappointment, but I am f—king sick of it.” 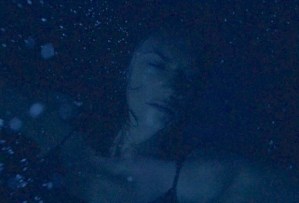 We witness as Alison sinks deeper and deeper. She’s still conscious, but too far gone. She gives in and closes her eyes. “I just want to live a different life,” she says. “I want to live a different story. I’m still young. I can be someone else. Someone who deserves love. Someone who can be happy.” We fade out to black, and the episode comes to a close.

Were you shocked by the turn of events that led to Alison’s demise? Or was your theory correct all along? Drop your thoughts in a comment below.