Two seasons back, if you had told me that I’d be not only interested in but eagerly awaiting scenes between Power‘s Tommy and Angela, I’d have told you to leave me alone and go find Yaz somewhere. But here we are.

The exchanges we’ve witnessed in the past few episodes between Ghost’s best friend and Ghost’s sometime girlfriend have been funny, chilling, insightful and captivating — and nowhere is that more apparent than in Sunday’s hour, when Egan realizes that the federal lawyer is thisclose to asking him to murder someone on her behalf.

“You got the devil inside,” he marvels, staring at Angela as though seeing her for the first time, and I haven’t been happier with the way a line of dialogue has played out on television in quite a while.

Lots of other important stuff happens elsewhere in the episode, too — including the death of un Jimenez — so read on for the highlights of “The Devil Inside.”

BAD CALL, TERRY | Ghost and Angela are skeptical that Tasha’s plan to ask Terry to lie for her will work, but then again, Angie notes, it might. “When people are in love, they make bad decisions,” she says, summing up her character’s entire five-season trajectory in one sentence. Over at Silver’s place, he’s incredulous that Tasha is flat-out asking him to do something that goes against his very nature and/or profession. “You’re asking me to commit perjury, to lie on the stand?” he asks.

See, he still thinks she’s covering for Ghost, and he wonders why he would put himself at risk for such a bad guy. And when he threatens to turn Ghost in to the authorities, Tasha blurts out that Tariq actually was Ray Ray’s killer. Once Terry gets past the fact that Tasha has been lying to him all this time, he maintains that the best course of action is for the teen to turn himself in. But Tasha won’t allow it, instead tearfully begging her lover to lie about when and where he saw the evidence box that allegedly held her gun. “All right,” he says, relenting. Jesus Christ Superstar, is it asking too much for at least ONE (non-Kanan)character in this show to think with his or her head sometime this century?

Over at Angela’s, Ghost thanks her for doing what she’s done to help Tariq. “I did it for myself, to stay out of jail,” she confesses, and something about the way Lela Loren delivers the line makes me laugh out loud. Then Ghost tells Angie he’s completely legit, and that Queens Child Project is his only hustle now, and I laugh even harder. “The cleaner you get, the dirtier I become,” she observes, a little despondent as she realizes that “they’re gonna come for me, for everything I’ve done.” Ghost tries to stop her freak-out spiral with some lovin’. “I’ve got you,” he replies, pulling her into a kiss. And while Ghost and Angie have clothes-on couch sex, over at Terry’s place, he and Tasha have nekkid couch sex. 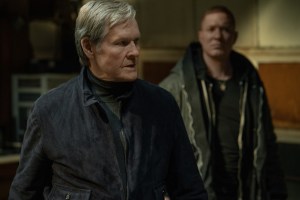 FAMILY MATTERS | Tommy spends the episode paying back Jason the $2 million he owes him — but disappointing the drug boss when he reports that the Jimenez are still living and breathing — and hanging out with Tony. Tommy, his old man and Sammy go to collect payment from their corrections facilities guy… but when the dude comes up short and tries to trick them, he winds up with a drill through his kneecap and then his forehead. (Side note: What’s more disturbing, the full-on shot of the drill entering the guy’s patella, or the maniacal way Sammy and the Egans giggle as he screams?)

Pushed by Saxe and Mak to get some actual dirt about actual crimes Tommy has committed, Tony uses the post-kill euphoria to lead his son into talking about the many murders for which he and Ghost are responsible. (It doesn’t take much cajoling.) Tony says he’s proud of Tommy, and it’s sad how happy that makes Egan. He invites him over for dinner with Connie — who has pieced together that Tommy is Tony’s kid — and that meal ends with Tommy’s mother, Kate, crashing and generally making a scene. And when Connie calls Tommy “my son,” the cokehead Long Islander has to be physically removed from the premises.

Off a question from Connie about the woman in his life, Tommy suddenly remembers that he kinda likes Lakeisha. So he swings by her place and says some sweet things, and that’s all it takes before he’s shucking his comically long coat and they’re going at it in the living room right next to her kid’s Connect-4 set. Somewhere in the great beyond — or, y’know, wherever they dumped her body — Holly is rubbing her neck and saying, “Gurrrrrl, watch yourself.” 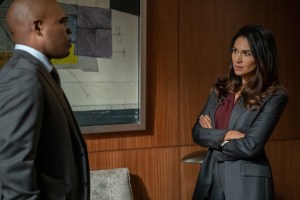 AN EXTREME SOLUTION | After a tip-off from Donovan that she has no friends in the office, Angela knows she’s got to swing big in order to stay out of jail. Her first step is to meet with Steve Tampio, whom she discerns is in a super-secret DEA group with a ton of power. She acts like she wants a job there, and he says it might be possible… but she’d have to move to Washington, D.C.

Later, Tommy surprises Angela by breaking into her house (that’s when she realizes that he’s the Jimenez’s competitor, not their employee) and her car (after he realizes, via newly reinstated lawyer Proctor, that she was likely behind Mike Sandoval’s death inside the MCC last season). It’s during the latter meeting that she nearly puts out a hit on John Mak — she goes as far as giving Tommy his first name — but then thinks better of it and says she wants to try one more thing before she goes full black hat. That’s where the aforementioned “devil inside” comment comes in, with an astounded Tommy saying that he thought Angela was a good guy. “I was,” she says, flatly.

The next day, Angie calls Mak to her office to offer him the lead counsel spot in Tampio’s D.C. group. And he doesn’t immediately say no… 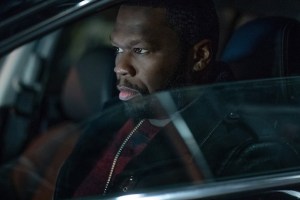 KANAN PLAYS A NEW GAME | While all of this is going on, Ghost and Dre give each other the intel that will allow their hits on Diego Jimenez and Jason to take place. But when Ghost asks Kanan to take his place for the Jimenez hit — the cartel head knows Ghost and will see him coming, whereas he won’t recognize K, Ghost reasons — things get convoluted.

Kanan rewrites the script, with some help from 2-Bit. After Dre lures Diego and his right-hand man to what they believe is a private party full of no-holds-barred hookers, the men find Kanan waiting there for them. He shoots both dead, then cuts Diego’s head from his body and brings it to Jason in a Louis Vuitton bag. See, K needs Jason to live, because he wants to take over Tommy’s role in Jason’s organization. And he says as much to the Serbian drug lord, who wonders why he should trust him, but gets his answer when Kanan announces that Dre is coming to murder him, and they’ve gotta leave now.

So when Dre arrives with an insanely powerful gun in hand, he finds only the housekeeping staff cleaning up Jason’s now-empty suite. [sad trombone]

QUICK SILVER | Over at Angela’s, she and Ghost are having a celebratory dinner: After finding out that Councilman Tate was skimming Queens Child Project funds in order to pay some shady people, Ghost blackmailed his way back onto the nonprofit he’d been booted from earlier in the episode. But the happy times are short-lived: Tasha shows up in a panic, because Ghost’s visit to Terry to make sure that he covered for Tasha backfired, and the lawyer has fled town. Taking a note from Sex and the City‘s Berger, he left little more at his cleaned-out apartment other than a subpoena and a Post-It saying, “I’m sorry, Tasha.”

His sudden disappearance will look really bad, Angela points out, and everyone in the room starts to freak out a little more. That’s when Tasha pulls out her gun — aka Ray Ray’s murder weapon, which she said she’d tossed in the river — and announces that she’s going to turn herself in. Then Ghost says so, that if anyone is going down for his family, it’s going to be him.

Oh, and did I mention that Teresi met with the feds and, in exchange for total immunity, told them about the time Ghost killed that prison guard?