Need to catch up? Check out the previous Power recap.

And while I understand the gobsmacking nature of Power‘s protagonist learning that his wife and his former mistress are working together to undermine a police investigation, you’ll have to forgive me if I giggle through the entire scene where it happens.

Because Omari Hardwick’s “huh?” face is a thing of perfection, and I defy you not to dissolve in laughter when he deploys it.

Also of note (and probably a heck of a lot more important to the story, moving forward): We see Tariq’s first drug deal, and it’s not likely to be his last.

Read on for the highlights of “A Changed Man.”

GHOST, GUTTED | We pick up in Angela’s apartment, where Ghost is still on the verge of losing his ish. “The pain, it just keeps getting worse. Things just keep getting taken away from me,” he tells her, nearly in tears. Remember, he’s fresh from seeing Rev. Macedon, and he’s really convinced that he’s on the path to being a better man. (I mean, on every Jan. 2, I’m always really convinced that I’m on the path to being a fitness model, so I understand, Ghost. Life comes at ya fast.)

He says that he told his biggest lies to her, especially concerning their breakup. “At the end, I didn’t leave you because I didn’t love you anymore. I didn’t leave you because of Tasha or because of my kids,” he says. “A man threatened my life, so I left you to save yours.” And when she angrily demands why he didn’t tell her, he points out that the deception worked: She’s still alive. He’s clearly looking for something here, but Angie doesn’t give it to him… but she does say he can stay the night — on the couch.

Both of them toss and turn all night. In the morning, Angela has a confession of her own. “You’re not the only one that hasn’t been completely honest, at least, not recently,” she starts. But before she can get more out, there’s a knock on the door, and it’s Tasha, and here is where Ghost’s aforementioned amazing WTF?! face comes in.

The face stays in full effect as Ghost’s kinda-wife and his former mistress bring him up to speed on their recent efforts to stop pretty much everyone from going to jail for Ray Ray’s murder. Tasha is flipping out that the police came to her house looking for her gun; Angela knows that means they’ll want to question her, but promises that she can prep Tash so she’s good to go. Still, “We’re gonna be a while,” Angela says to Ghost, essentially dismissing him. He remains dumbfounded. Have I mentioned recently how much I love this scene?

MAKING MOVES | Ghost pulls himself together and meets with Rashad Tate and Dre: The Queens Child Project and all of its donors are getting audited by the IRS, which doesn’t make anyone happy. Ghost takes Dre aside for a minute and suggests a truce, saying “I think we can accomplish more working together than working against each other.” As a goodfaith gesture to his highly skeptical former protégé, Ghost says he can talk to the Bassetts to get Dre his club job back. Then Ghost extends a hand to seal the deal, but the scene ends before we see whether Dre accepts.

Interestingly enough, Ghost’s olive branch offer is one of many complicated situations Dre finds himself in during this week’s episode. First, he has to deal with 2 Bit’s rather cavalier attitude regarding the Tainos Kanan killed last week. Then, he gets mad about Cristian and his crew trash-talking him in Spanish (which, by the way, Dre doesn’t understand) — and he thinks Cris is actively trying to undermine him. THEN, in his efforts to have someone translate for him, Dre learns that Alicia was probably the person who planted Diego’s gun. There’s a whole lot of subterfuge and such, but in the end, Alicia OKs a hit on her own brother (via Dre). She also lights Uriel’s cousin on fire, but that’s neither her nor there.

By the end of the episode, Dre and Ghost have a new pact: Dre will take out Jason (in an effort to undermine Tommy) in exchange for Ghost’s killing Diego Jimenez.

A BRAND NEW MAN? | When Ghost is back at the penthouse, he’s still all contrite, saying that he understand why she didn’t trust him enough to include him in her plans with Angela and apologizing for not being the husband he promised to be when they got married. He also lets her know he’s had some revelations since talking to Rev. Macedon. “I can’t help but feel like it was my finger on that trigger that killed our baby girl,” Ghost says tearfully… but Tasha isn’t buying it. This newfound repentance isn’t real, she points out: He’s just doing it to make himself feel better. Ghost takes the criticism in stride, though, saying that it’ll take time for her to forgive him. I wouldn’t hold your breath, dude.

Almost offhandedly, Ghost wonders how Tasha knew she could trust Angela to help them with Tariq etc. “Because she still loves you,” she says simply. “She does.”

Is it any wonder, then, that the next time Ghost stops by Angela’s place, they suck face like two Roombas in love? Still, he eventually leaves and says that maybe Angela will be able to trust him “if I actually do change.” 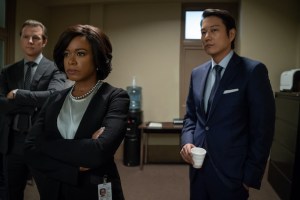 TASHA’S PLAN | The next day, Blanca Rodriguez questions Tasha for a long time, but Angela’s prep work is effective. Still, Blanca is working off the theory that Ghost killed Ray Ray, and that Ghost and Angela are still together and are working to frame Tasha for the crime. It’s funny you mention that, Blanca, because the St. Patricks are thinking about framing someone for the crime, but it’s not Tasha. (For what it’s worth, they don’t have anyone in mind at the moment.)

And Tasha is angry, because she’s realized that part of the reason the feds are so interested in this case is “You. They want you,” she tells Angela. But Mrs. St. Patrick has her own plan: She’s going to get Terry to lie for her, corroborating her story about when she discovered that her gun was missing. And she’s sure he’ll do it, she tells Ghost, “because he loves me. He loves me more than you ever did.”

Over at the Assistant U.S. Attorney’s office, Tameika is about to pull the plug on the St. Patrick investigation when Saxe makes a connection that links Tasha’s gun to Ray Ray’s crime scene. “Valdes f—king buried the report,” he announces to Mak and Tameika, theorizing that Angela is an active part of St. Patrick’s organization. 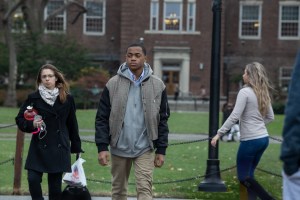 A NEW COURSE OF STUDY | Up at Choate, Kanan visits Tariq and takes the teen to meet up with a business associate he met in jail. The guy has a big, fancy house and a buddy-buddy vibe with K… until the guy tries to change the terms of their agreement. Then, Kanan beats him to a bloody mush and throws him into a glass table, which causes the guy to cry and hand over a wad of cash rather quickly.

Then, when the guard at the guy’s gated community gets suspicious, ‘Riq flashes his Choate jacket and fakes an asthma attack in order to get away quickly. Add that to the fact that Kanan realizes that Tariq — and not Ghost — killed Ray Ray (“That’s what’s up!” K says), and the older man has a proud new outlook on Ghost’s kid.

Tariq also seems to have a new take on things after his extracurricular activity: Though he wouldn’t sell Tasha’s sleeping pills to his roommate earlier in the episode, he has no such qualms by the end. And when he texts Kanan to ask him if he can get him some more product, it appears that a baby drug dealer has been born.

USE YOUR NOODLE | Meanwhile, Ghost has to stop cleaning Tommy’s drug money, thanks to the audit. This leaves Egan in a tight spot. Or, as he puts it, “Jason’s gonna f—king eat me alive.” So Teresi comes up with the idea to smuggle drugs into jail via hollowed-out ramen packs, the same way that Sammy used to get him phones and such when he was in the joint. Tommy’s all excited about the venture, which now includes Sammy, but Teresi’s allegiances haven’t changed: Once he gets the goods on his kid, he’s going to sing like the most eager of canaries.