Happy birthday, Tariq. Know what your Uncle Tommy got you? The fear of God!

This week’s Power marks a mostly bitter, not-so-sweet event for the St. Patrick family: Tariq and Raina’s annual celebration, which basically only highlights how upset Ghost and Tasha are that their twin daughter, and not their twin son, was gunned down at the end of last season. (Think I’m being harsh? Tasha basically says that, verbatim, during the hour.)

And on top of everything, Tommy lets the birthday boy know that he’s figured out exactly who tipped Dre off the night of the hit. And when that happened, I might’ve said “Oh” and a word TVLine won’t allow me to print.

Also: Kendrick Lamar is amazing. But you likely already knew that. Read on for the highlights of “Happy Birthday.”

TERMINATION TWO WAYS | The episode opens with Vincent summoning Tony Teresi, Sammy and Tommy to the bar, because the Mob boss has figured out that something about the shooting doesn’t add up. When Tommy blurts out that it was Dre, Vincent realizes that Tommy (and Sammy) lied about “handling” Dre in retaliation for the deaths of the two Italian hitters from the season premiere. Tommy admits that he hadn’t told the truth, which prompts Vincent to hand Tony a gun and demand that he choose one of his “boys” to kill — and when a horrified Tony refuses, Vincent says he’ll murder all three of them otherwise. So Tony reluctantly pulls the trigger on Sammy… only to find out that there are no bullets in the gun. As Tommy and Sammy process the fact that neither of them is going to die that day, Vincent washes his hands clean of the trio — and that includes firing them from his operation.

When Tommy tells Kanan and Ghost about the incident, Ghost wonders why the old man would choose the son he just met over a close, longtime friend and business associate. This angers Tommy, who counters that he’s Teresi’s flesh and blood. All three men agree that Dre was likely behind the drive-by — even though Kanan knows full well he wasn’t — and then Ghost gives Tommy a clean check and leaves.

That’s when Kanan floats the idea of taking Dre out by edging him out of his own organization. Given the way Cristian’s increased responsibility irks Dre, he reasons, “Maybe we help that beef along.” But Tommy says no, because Ghost would think it’s a bad idea, thanks to Dre’s new visibility in the Queens Child Project. Kanan shakes his head in disappointment. “Ghost got you believing you can’t do nothing without him,” he says on his way out. (Side note: This man is a master manipulator, and I am here for it.) 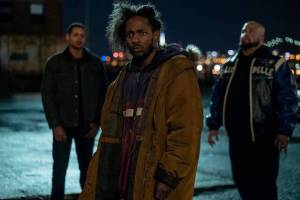 LACES IS ACES | Know what else I’m here for? Lamar’s guest spot as Laces, a crackhead who approaches Kanan outside a bodega. At first, he seems like just an unbalanced homeless guy, and K starts to blow him off. But when he notices that Laces peppers his speech with Spanish, Kanan wonders if he knows any Tainos. Before you can say papi, Laces is drawing out Jimenez footsoldiers one by one, just in time for Kanan to show up — on a girl’s bike, in one instance — and fill them with lead.

Laces is enjoyably wacky but not stupid: When he hears Kanan pull out his gun after the second murder, he realizes he’s probably next. But K ultimately decides not to shoot the man, and the moment is a surreal one in which Laces appears to see into K’s soul… until it becomes clear he’s just lampooning some anti-depression medication ad he heard once. And then, with a high-pitched giggle and a funny little walk, Laces shuffles off into the night. 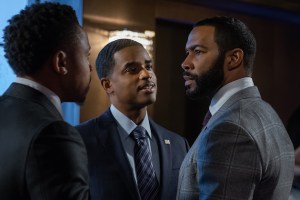 MEET THE NEW GHOST | Tate calls Dre, Ghost and Simon Stern (hi, Victor Garber!) into a meeting to announce that Dre — and not Ghost — will be the face of the QCP on the community level. “We already have a black on the team who’s bootstrapped his way to the top of the industry. Andre seems so… redundant,” Simon says. Nice. Even though Stern later advises Ghost to wriggle out of this problem the way he’s wriggled out from every box Simon’s ever tried to put him in, the meeting sends an already on the edge Ghost spiraling. And HARD.

First, he has Angela meet him in the store where he’s trying to pick out shoes for a birthday gift for Tariq. Her face registers three letters: a W, a T and an F? She tells him she can’t get sucked back into seeing him, then he plays the “It’s my dead daughter’s birthday” card, and she immediately feels terrible. Not terrible enough to ignore a call from Tameika, mind you, but still. She apologizes and takes off. Ghost buys a pair of sneakers.

Then, Ghost gets a little bit of a win by having the Bassetts fire Dre, who signed a noncompete agreement when he worked at Truth. That means the QCP fundraiser currently scheduled for Dre’s club will be moved to Truth, as well, and James seriously thinks he’s gotten the better of his protégé. But when Tate brings Dre to the party, anyway, Ghost starts drinking all the booze in the place. Pretty soon, he’s got Tate in a stranglehold up against the bar, and everyone is watching. “You know you done f—ked up, right?” Tate says calmly afterward.

SADDEST PARTY EVER | While Ghost is finding new lows for his reputation to sink to, he’s also missing Tariq’s birthday dinner at the apartment and forgetting to pick up the cake. Tommy seems to give the teen a bit of a reprieve from the gloom when he lets Tariq drive his car. But when they pull over, Tommy continues their very cordial conversation by saying, “It was you who warned Dre that we was coming for him, wasn’t it?” WHAT. WAIT. WHAT. The kid initially plays dumb but eventually confesses, saying he did so “‘Cause he helped me get my enemy.” Tommy shakes his head. “Loyal only to your own cause,” Tommy says. “Sounds exactly like Ghost.” Then he warns Tariq that he knows nothing.

Back at the house, Terry seems to save the day by bringing by the cake Ghost never picked up from the bakery. Then the cops show up looking for Tasha’s gun, wanting to check it against their database. Tasha reminds them that she reported it stolen, and things are a little tense while that gets checked out, but then they leave. Blanca, however, who is in the group of officers who visit, certainly notices Tasha’s discomfiture. And she seems to enjoy it.

After the police leave, Terry is sure that Tasha is lying about the gun, but he still thinks she’s doing so to cover for Ghost. “Either you are a victim of James’ actions, or you’re an accomplice. Call me when you decide which one you are.” And after he leaves, the family goes to eat the cake… but they’re all a little horrified when they realize that Tasha ordered it with Raina’s name on it by accident/force of habit. And when Tariq finds her crying in her bathroom and tells her that he wants to confess, she tells him to “just get the f—k out the way” and let the adults handle things. Then he asks if she wishes he died instead of Raina, and she cries but doesn’t say no.

GHOST V. ‘RIQ | Ghost comes home drunker than drunk, slurring and falling, and quickly gets into a nasty argument with Tariq. “I gave you everything,” Ghost yells, crowing about how ungrateful his son is. “You lied to me my entire life about who we are and where we come from,” Tariq counters. “All you do is think about yourself. Mom, Uncle Tommy and Kanan think that, too. Maybe it Raina hated you, she would still be alive.” That, as you might imagine, does not go over well with the senior St. Patrick, who lumbers around as he tries (and fails) to beat his son into the ground. Tasha breaks it up, and Tariq announces he’s going back to Choate that night. (Kanan winds up driving him.) After he takes off, Tasha kicks Ghost out.

Ghost winds up at church, where the pastor who presided over Raina’s funeral listens to his soused reasoning as to why everyone but himself is to blame — including God! — for Raina’s death. I love how the reverend is slicing through Ghost’s BS like it’s kobe beef. “What are the choices that led you to this moment? What would you do differently if you could?” the clergyman asks him. “What would Raina do? What would Raina want you to do?” Ultimately, Ghost says he knows what he wants and needs to do: “I want to be a better man.” Then the pastor asks where he lost his way… and the next thing we know, Ghost is showing up at Angela’s door. She lets him in. 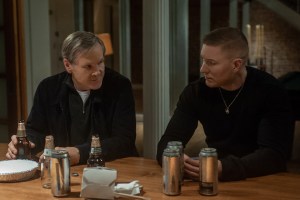 SNITCHES GET STITCHES | After putting pressure on Mak and Saxe to get something solid from Teresi, Tameika looks into Angela’s commandeering of Blanca Rodriguez’s files. Angie assures her boss the move was just about finding dirty cops, but it’s not clear that Tameika is convinced. “How we win matters just as much as the win itself,” she reminds the AUSA.

But now that Angie knows what Mak and Saxe are up to, she has Proctor arrange a meeting with Tommy in which she offers him blanket immunity in exchange for telling her everything he knows. She also takes the tracker off his car, which rattles him a little. Tommy turns her down, but afterward, Proctor reminds him that immunity could go a long way if Bailey Markham’s death ever comes to light. Tommy threatens him that it better never do so.

After a conversation with Teresi about how snitching’s not snitching if the people you rat out don’t really matter to you, Tommy arrives at Angela’s apartment and asks for the tracker back. She’s spooked, but plays it tough as she wonders why he won’t take the immunity deal; otherwise, she could just nail him later on some other charges. After all, what’s to stop her? He’s incredibly chilling as he says the thing that’ll stop her is the same fear that made her tuck her gun into the waistband of her pants before she let him in. Then he indicates that he’s been spying on her for some time, and leaves her to freak in private.

Meanwhile, Teresi tells Saxe and Mak about the check from Ghost he saw at Tommy’s apartment, and it’s all those two can do to stop themselves from peeing with joy.