The final mission of Quantico‘s three-season run is a doozy: Take out a seemingly uncatchable crime boss who’s personally responsible for the deaths of several members of the team’s loved ones. Are Alex & Co. successful in their last outing? Of course — but their win exacts a serious price.

In a moment, we’ll want to know what you thought of the series-ender. But first, a quick recap of “Who Are You?” 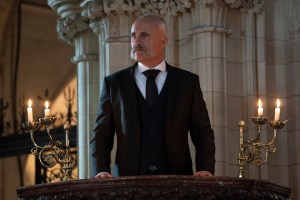 REST IN PIECES | Alex, Owen, Ryan etc. are all over the place at the funeral for Eamon Devlin in the hopes that Connor will show up to pay respects to his brother. The Dublin police are there in full force, as well, but when the boys in blue look the other way as Connor walks right into the church, the FBI realizes that the cops are in Devlin’s pocket, too.

Inside, Connor ascends to the pulpit to vilify the Americans, whom he claims killed Eamon — something we know to be a lie, given that we saw Connor shoot his bro in the head — and to announce that he’s giving up all vendettas and blood feuds against any Irishman in the name of “peace.” That courtesy apparently doesn’t extend across the Atlantic, because when Alex and Mike go to grab him on his way out of the sanctuary, Devlin calls Alex “Parvati,” signaling that he knows about her season-starting sojourn in Italy. Or, as she tells Mike with horror, “Devlin has Andrea and Isabella.”

INSIDE MAN | Alex sobs for a hot second, then pulls herself together and gets to work. When Mike tries to console her, she pulls away: “Everyone who gets close to me gets hurt. I’m just giving you a chance to avoid being one of them,” she warns him.

Downstairs at the manor house that’s serving as FBI field headquarters, Jocelyn and Owen look at some surveillance photos she took during the funeral. Based on his body language, she notices that Little Bobby, Eamon’s former right-hand man, seems to really dislike Connor. And after the gang grabs Little Bobby and helps him realize that Connor — not the Americans — killed Eamon, Little Bobby becomes a very important asset.

Meanwhile, Alex runs point on the excursion to recover Andrea and Isabella, whom they find locked up in a stable. Andrea’s WTF?! face only gets more egregious as Alex hurriedly tells him she’s actually an American FBI agent, but c’mon dude — nobody who’s ever toiled in an agricultural field would wear espadrilles and a sundress for a hard day’s labor. You really should’ve known at least something was up.

A gunfight breaks out between the agents and Devlin’s men outside, which Isabella thinks is a great time to run away. Unfortunately, she runs straight into Devlin, who holds a gun to little Bella’s head as he makes a getaway. Alex is beside herself, and Andrea is (understandably) apoplectic. Later, when Alex asks him to trust her, he spits, “Trust you? I don’t even know you” and skewers her with the line designed to do the most damage to kidless people the world over: “If you ever had a child of your own, you would understand.” 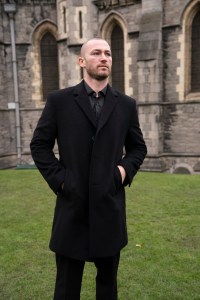 BOOTH FOR BELLA | Devlin wants to trade Isabella for Ryan, aka the man who killed his son. The team plans to just shoot the heck out of Devlin and his men, in the hopes that they won’t actually have to make the exchange. Andrea is resolute in his desire to accompany them, and even though it’s the worst idea ever, Alex says OK.

Andrea is really great at being sexy and Italian, but really bad at being rational when his daughter is in danger. So during the tense situation, he rushes out to try to reason with Devlin, which prompts the older man to shoot him. Alex cries out and rushes to pull her former love into her arms, but it’s too late: As his blood exits his body at a rapid rate, Alex promises Andrea she’ll bring his daughter home, then he dies.

The only option left, then, is for Ryan to surrender to ensure Isabella’s safety. “I love you,” he calls out to a shocked Shelby as he’s manhandled into a car with Devlin. Bella then is released safely. She runs to Alex, who gently cautions her to close her eyes so she won’t see her dad’s corpse on the cobblestones behind her.

RIDING TO RYAN’S RESCUE | While the FBI brokers a new power deal between Little Bobby and another high-powered Irish criminal, a quick-thinking Ryan surreptitiously manages to activate a tracker he had on him. That action doesn’t stop Devlin from beating the snot out of Booth, but it does eventually lead to his rescue while Devlin is out of the room. While Ryan is comatose in the ICU, Little Bobby lures his boss to a bar, where he’s ambushed by Owen and his team. “It ends here,” Little Bobby says, shooting Devlin in the throat and killing him while the agents do nothing to stop him. 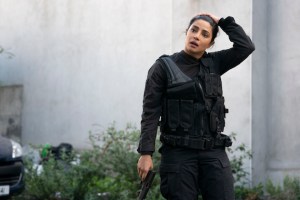 After the bad guy’s death, we see the members of the team getting to relax just a little bit for the first time in weeks. (Well, not Shelby, who’s crying her eyes out by Ryan’s bedside, but pretty much everyone else.) Owen kisses Jocelyn, who seems a) unsurprised and b) totally into it. Alex and Harry discuss how Ryan’s probably going to be fine, thanks to the lack of brain trauma. And Alex gets some wisdom from Shelby, who reminds her that “truly loving someone” is the real deal in life: “As your best friend, I’m telling you: Stop running.”

And the next time we see Alex, she’s sitting down next to Bella. When the little girl wonders aloud what will happen to her, Alex asks if she’d like to accompany her to America. (Side note: That’s sweet and all, but is relocating a grieving and traumatized child to a country where she has no roots and/or family — speaking of family, doesn’t she have relatives in Italy who’d be better-suited to taking her in? — really the best idea?)

Anyway, that’s how it all shakes out. Grade the episode via the poll below, then hit the comments with your thoughts!