Need to catch up? Check out the previous Quantico post mortem here.

Quantico‘s Alex Parrish probably thought she’d be hearing a lot more Italian, and a lot less gunfire, in her post-Season-2-finale life. But let’s be honest: All the cappuccinos in the world couldn’t keep her in the civilian life for long, not when Ryan comes calling with those earnest, spy-puppy-dog eyes. Plus: This show isn’t going to reboot itself, right?

Read on for the highlights of “The Conscience Code.” 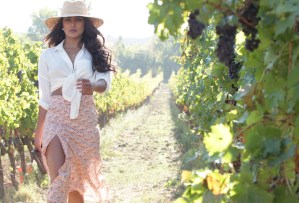 GRAPE HARVESTING, GOOP-STYLE | As the premiere opens, Alex is living in Italy, working as a grape harvester (and wearing some really unlikely outfits while doing so — see photo at right). It’s three years after the events of the Season 2 finale, and she’s ordered up an experience I like to call The Full Study Abroad Package: shopping in sun-drenched outdoor markets, conversing with the charming locals and shacking up with a local hottie and his very cute daughter.

Alex’s new man and his kid think her name is Parvati and that she was a lawyer in New York. I’m a little concerned that they don’t wonder why she’s wearing espadrilles to her farm labor job, but it doesn’t really matter, because Local Hottie and Cute Daughter are not long for Alex/Parvati’s world: After thugs come to the house looking for her one night, Alex sends her Italian family away for their own safety. “I need to find who sent those men,” she tells him.

HELLO, LOVER | Alex’s next stop is Zurich, where she opens a safe-deposit box containing money and passports for her and Ryan. And guess what? Agent Booth just happens to be following her. They are definitely no longer together, which becomes abundantly clear as they have a tense conversation at a Laundromat: The same people looking for Alex kidnapped Shelby a few days before, and they’re planning to kill the blonde “if you and I don’t give them what they need,” he warns. “The Conscience Code?” she asks, and he confirms. Apparently the code — which can “bypass any computer-controlled missile, bomb, drone, whatever” and which Alex had as collateral in case she was ever deemed a traitor again (yeah, I don’t totally get it, either) — was in their shared storage box, but it’s gone; Alex says she burned it but memorized it. Then she notes that Ryan isn’t wearing a wedding ring, but she can tell from his hand that he normally does. “Alex,” he says, “Shelby’s my wife.”

Ryan then helpfully fills in some of the details we don’t have. Alex ghosted on him in Thailand; she counters that she “needed a clean slate.” Still, he maintains that “I married the woman that I love,” and that he has no regrets. Alex refuses to give him the code but agrees to accompany him to figure out a way to save Shelby. 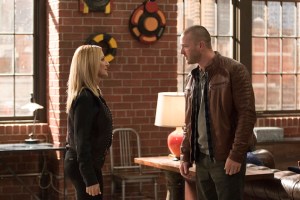 MEET JOCELYN | Agent Wyatt, by the way, is being held in a tailor’s workshop somewhere in Brooklyn. The Big Bad for this episode is a matronly female known as The Widow, and she needles Shelby that while Ryan may not have told her about the code, he certainly shared it with Alex. The Widow is planning to auction the code to the highest bidder. Oh, and computer whiz Will is on The Widow’s payroll.

Once they’re back in New York, Alex and Ryan meet with Owen, the only person Alex feels she can trust. Owen, in turn, goes to Quantico to recruit a deaf FBI agent/teacher named Jocelyn Turner (played by new cast member Marlee Matlin) for an op. She’s not interested until he informs her that they’re trying to take down The Widow. As it turns out, Jocelyn was inside The Widow’s operation for 19 months before a bomb’s detonation deafened her. And though Ryan is less than pleased that he has to work with someone who’s so severely hearing impaired, he, Owen and Alex all are fluent in ASL — in this universe, the CIA requires an immersion course — so… meet the (unofficial) new team! 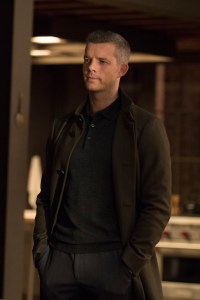 LIFE IN THE PRIVATE SECTOR | Elsewhere, Harry is working a private security gig for some obnoxious and obnoxiously rich brothers. Ryan wants his former co-worker to get one of his rich employers to bid on the code and win. Harry, predictably, says bugger off. But when one of the coked-up brothers hits a prostitute, Harry changes his mind, and winds up pitting brother against brother to get the younger one to take part in the auction. The plan ultimately doesn’t work, and the brother is livid, but Harry kills him, so that’s something.

DE-CODED | Will acts as a lure to get Owen to meet him, and apparently the new elite team’s first mission is to get captured as quickly as possible, because the tech expert sticks Owen with a syringe and sets up a situation in which The Widow’s men grab Alex. It’s a whole thing. Shelby and Alex are reunited as they’re bound to chairs at The Widow’s lair, and the only thing keeping a patina of awkward off the entire situation is the fact that both of Ryan’s ladies are probably going to die within the day. #brightside

Eventually, though, Ryan, Owen and Jocelyn figure out where The Widow is hiding the women, and the trio rides to the rescue before anyone gets hurt. The Widow is extradited to Turkey on a war-crimes charge. Will is sentenced to time in Leavenworth. And the director of the FBI promises Alex a full pardon from the president, but that’s probably cold comfort, given how much Alex has to watch Ryan cuddle Shelby post-rescue.

Meanwhile, Owen announces that he’s put together an off-book, black ops team that will report only to him and Jocelyn. Ryan, Shelby and a newly unemployed Harry are on board. But Alex says she wants to go home to Italy. When she does, though, she sees her man bringing his daughter to school and realizes that living with them again would only put them in harm’s way. So she leaves, returning to become part of Owen’s new group. (C’mon, you knew that was how it was gonna end!)

Now it’s your turn. Grade the premiere via the poll below, then hit the comments with your thoughts.