Weeks ago, Quantico creator Joshua Safran told TVLine that the ABC spy drama had shot an ending that he’d cut if word of the show’s renewal hit before the finale aired.

As it turned out, though, the scene was gone long before news of the Season 3 pickup — and Safran’s stepping down as showrunner — broke Monday evening.

The final moments that aired found Alex going on the FBI/CIA-sanctioned lam after breaking the law in order to bring crooked President Roarke’s collaborator scheme to light. As she rode a getaway plane to relative freedom, she mourned the loss of her newly rekindled relationship with Ryan… only to realize that he was on the plane with her, ready to give up his life’s work in order to support hers.

What aired “is a better ending” than the alternative, Safran tells TVLine, setting up the cut footage. “You just saw Ryan and Alex at their destination and then, just like last year, someone… appeared and offered her an offer she couldn’t refuse.”

That person, by the way, would have been played by Supergirl‘s Jeremy Jordan, with whom Safran worked on Smash.

Read on as Safran breaks down the rest of his final episode as boss, including which characters should have kissed earlier in the season (and why they didn’t) and which of the series’ characters he wanted back for the finale (and why he couldn’t get them).

TVLINE | I love how overtly feminist the show has gotten, especially in the last few episodes with Ryan realizing his best, most meaningful role is to support Alex as she does awesome stuff.
[Laughs] It’s a feminist show! Beth [Schacter, producer] and I talk about that all the time. From Day 1, that’s always been the mandate of the show. Not to knock other shows, because I really don’t want to do that, but a lot of other shows that feature women centrally, they do [so] around their relationship with a man or they’re defined by their relationship with men. This show, while she had a relationship with Ryan, she’s never defined by it. Whether he’s on that plane with her or not at the end, she would’ve been OK.

We just kind of dialed it up a little bit in the second-to-last episode, that scene with Henry Czerny and Jake [McLaughlin] where they talked about how sometimes it’s just as good to be the person supporting somebody as it is to be the person supported. And you have to find your role in life… I will tell you, the one person not happy with that was Jake. [Laughs] Not right away. He’s a soldier. He definitely came around, because he understands the Alex-and-Ryan dynamic.

TVLINE | When you said that Alex would be OK without Ryan, my first thought was, “But Ryan wouldn’t be OK without her!”
Totally. We knew the ending of the season definitively at midseason. And she was going to be alone. When we needed it to function as a series finale just in case, we knew she’d end up with Ryan anyway, so we put Ryan on the plane. And there was the parallel between the beginning and the end, that scene in the pilot.

TVLINE | So before Alex saved the day, had Roarke successfully dismantled the FBI and CIA?
He had not. That was Roarke’s plan. Roarke’s plan was to start [the combined law-enforcement agency] after the Constitutional convention, but that had to happen first for that to really begin. So we were prepping everybody. But now it’s back to being the FBI and the CIA. We hear that Owen is taking over Keyes’ job and Shelby will be teaching at Quantico. And Raina and Nimah, Owen would like him to come work with him. So it will be interesting to see what happens.

TVLINE | And the other collaborators, at least for now, are able to get away with their part in the evil scheme?
We lost a scene… where you see Peter Theo and Maxwell Fletcher, even though Roarke had said they were involved, the cops came up to them and they said “We want to talk to our lawyers.” You understood that they would get away with it.

TVLINE | You chose not to have Alex and Ryan get re-engaged in the finale.
No, we didn’t, although it was in the cut scene. Once they arrived at their destination, you saw that she had the ring on. In my mind, they are engaged now.

TVLINE | Iris was back. Was there anyone you wanted to have back at the end of the season but couldn’t get?
Yes. We always wanted LiLi [Li Jun Li], that was just scheduling. We actually wanted LiLi for several episodes this year, but she was on Blindspot and we could never make her dates work… We wanted David Lim to come back, but he got S.W.A.T. He was just recurring with us. He was supposed to be in the finale, so that’s sad that we weren’t able to close that loop. And we wanted Russell [Tovey] back, but Russell was in tech [rehearsals for a British production of Angels in America]. So we thought maybe we would get Russell on an iPhone, calling in, and we wrote that into the script. It seemed like such a cheat… Those were the three that we wanted back, and we got one of the three. 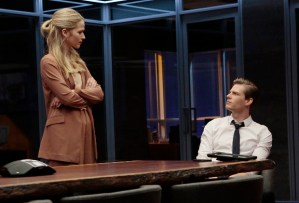 TVLINE | Why did you decide not to go all the way with Clay and Shelby, and also with Owen and Miranda?
Owen and Miranda, that was never planned. All I can tell you is that Aunjanue [Ellis] and Blair [Underwood] have amazing chemistry, even when they are not trying to. [Laughs] There was never an Owen-Miranda plan. Aunjanue and Blair really liked each other as people, and they hadn’t shared scenes this year… So when they finally got to work together, they’re such great actors, they just loved playing off each other. I think it came across that they loved it a little bit too much. [Laughs] So we had to dial it back a little bit. But that was never the plan there.

And with Clay and Shelby, the story, we always based it on The Way We Were. But we thought they would get together at some point and decide not to be together by the end of the season. Somewhere along the way, I just felt like it was playing so beautifully without needing to go there. And I talked to Johanna [Braddy] and Hunter [Parrish], and they were such pros. They take it so seriously. They dream about it, they think about it, they talk about it. Working with them was really extraordinary in that way. There were a couple of times we wrote that they kissed, and in the moment it didn’t feel right, so we took it out. By the time we got to the end, we realized it could still be The Way We Were, even if they didn’t get together.

Grade the finale via the poll below, then hit the comments with your thoughts on the season-ender!