Jamie wants to “start anew” in North Carolina when Outlander returns for Season 4 — but don’t worry, Sassenachs: It seems like the danger and drama (not to mention steamy, steamy love scenes) of Seasons 1 through 3 have followed the Frasers to the New World.

Starz released a new teaser trailer Monday evening, coinciding with the video’s debut at a New York City showing of star Sam Heughan’s new movie, The Spy Who Dumped Me. Spoiler alert: If you haven’t read the books and don’t want to be clued in to what’s going on in a few shots, just press PLAY above and skip anything written below, aye?

In the short promo, we see: 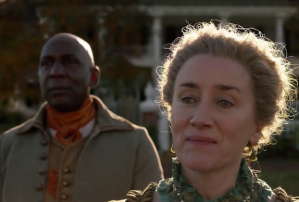 * Mr. and Mrs. Fraser arriving at River Run and meeting Aunt Jocasta (Orphan Black‘s Maria Doyle Kennedy), the relative Jamie hasn’t seen since he was a boy, as well as her slave Ulysses (The Dark Knight‘s Colin McFarlane)

* Jamie warning someone “It’s not safe here” and muttering, “Oh, Christ” as he and Claire gaze out a dark window 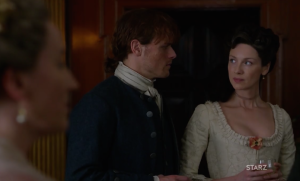 * The Frasers all gussied up for a party at River Run

* Jamie and Young Ian getting a beat-down from two men, maybe more

* Someone — our guess is Brianna, though it’s tough to see — standing in a place that looks a lot like Craig na Dun

* Jamie fighting his way to the front of a crowd watching a hanging, likely Gavin Hayes’ 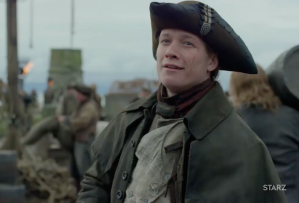 * Stephen Bonnet (Downton Abbey‘s Ed Speelers) ironically warning the Frasers, “Be wary. Travelers in these woods are thieves and outlaws.”

* Claire finding a human skull with dental fillings — an anachronism, for sure — and wondering, “What if it was a warning from the future?”

The series’ 13-episode Season 4 will premiere in November 2018. Press PLAY on the video above to watch the teaser, then hit the comments with your predictions for the season ahead!