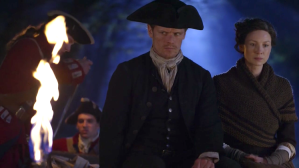 Following its Outlander Season 3 marathon Sunday, Starz released a scene from the time-travel drama’s (far-off) upcoming fourth season. It’s not available online — though you can catch it on the network’s app or video on demand starting Monday — so we thought we’d do ye a solid and offer up an incredibly brief recap.

The scene in question is from Drums of Autumn, the fourth book in Diana Gabaldon’s novel series and the basis of the show’s Season 4. We see Jamie and Claire driving their wagon at night and getting stopped by a bunch of Redcoats who demand to know their business. As the soldiers inspect the carriage, Jamie alerts them to the fact that there’s a corpse wrapped up in the back: He says it’s one of his countrymen — book readers will know it’s Gavin Hayes — who was hanged and whom Jamie is ensuring has a proper burial. 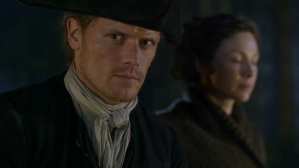 As the very tense Frasers hold their breath and Jamie lays a casual hand on his weapon, one of the soldiers sticks the corpse with his bayonet to ensure that it’s truly dead. When nothing happens, Claire and Jamie are allowed to continue their journey.

Spoiler alert: If you haven’t read Drums of Autumn, you might want to bail out now.

What the soldiers didn’t know is that the body in the back of Jamie’s carriage is someone who’ll become crucial later in the season: It’s actually a very alive man named Stephen Bonnet, an Irish criminal who also was supposed to be hanged that day but who escaped his captors. When Bonnet asks Jamie for help evading the Crown, Jamie is a little wary but agrees nonetheless.

While we won’t go into the whole ordeal, let’s just say that though Jamie, Claire and Bonnet part ways shortly after the events of the sneak-peek scene, he’s part of the Fraser family’s story for a loooong time after.

Did you watch the scene? Did you have thoughts about it? Share them in the comments below!