Nashville fans, you have series creator Callie Khouri to thank for that sweet flashback to Deacon and Rayna’s wedding night in Thursday’s series finale.

Because, without her powers of persuasion, it might not have happened.

“I’ll admit: When they first called me to do it, I was a little against it,” former series star Connie Britton tells TVLine exclusively, chuckling. “Because I thought, ‘Rayna’s gone. And I don’t like the idea of having her come back as a ghost.”

(For those of you who might’ve dropped out of the series but come back for its swan song, a brief catch-up: Britton exited the show in Season 5 after Rayna died from complications from a car accident. Everyone cried.) 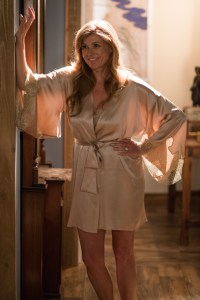 But after talking with Khouri about other, more corporeal ways that the First Lady of Country Music might show up to see off the CMT drama, Britton says she was amenable. “Then she told me about the last moment on the Ryman stage, and I loved the idea of that. So we made it happen,” the actress adds, recalling that she shot both the flashback and the group sing over the course of two days.

Scheduling her visit “was a little bit tough,” says executive producer and co-showrunner Marshall Herskovitz, noting that Britton stars in Bravo’s upcoming true-crime anthology series Dirty John, which is currently in production. But “it worked out, and everybody was thrilled.”

During the episode, Rayna appears as Deacon recalls a conversation that took place in their bedroom the evening they wed. She reminds him that even though they are flawed individuals who have hurt each other in the past, “we must choose each other. And I choose you exactly the way you are.” The memory helps him come to terms with his conflicted feelings for his father, Gideon, whom he invites onstage to play “A Life That’s Good” at the end of the hour. (For a full recap of the episode, go here.)

“It was just… remembering ‘How do you forgive me? How do you go on with it, knowing that it can all fall apart?'” series star Charles Esten says. “But most of all, it was just my friend Connie again, and I think you’ll agree that that stage wouldn’t have been the same — especially the gang’s all here [number] — without Connie.”

Britton says that playing opposite Esten “felt just like picking up right where we’d left off.” She laughs. “It just all came back.”

Everything except the double-take she had to do upon seeing how much her TV daughters, Lennon and Maisy Stella, had grown since she saw them last.

“They’re like different people! I was like, ‘Oh my gosh, where are my little girls?” she says, laughing. “But they’re both doing great, and I will always love them.”