Look, we agree with Ellen Pompeo. Grey’s Anatomy’s Meredith doesn’t need a man to make her whole, happy or anything at all. But the ABC drama, returning Thursday, Sept. 27, for what’s been dubbed its Season of Love, is a TV show — you know, a show whose purpose is entertainment. And we, like Camilla Luddington (as she confessed at Comic-Con), find “sexy Meredith” very entertaining. So we’re ready to see her swept up in a new romance, one that might even — dare we say it? — rival her legendary one with late husband Derek. 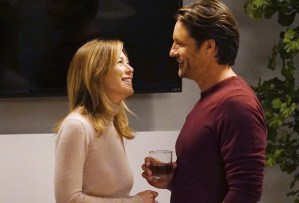 In Seasons 12 and 13, Grey dipped her toe back into the dating pool with Martin Henderson’s Nathan. But that pairing seemed doomed from the start. As Pompeo told The Hollywood Reporter, after Patrick Dempsey’s departure, “I couldn’t believe how fast the studio and the network felt like they had to get a penis in there.”

Were it up to us, we’d bring back Nick Marsh, stat. Pompeo had killer chemistry with Scott Speedman during his Season 14 guest appearance; he’s free now that he’s been bumped off of TNT’s Animal Kingdom; and even Mer couldn’t deny to Alex that the visiting doctor had “made me feel something that I haven’t felt since Derek.” He had the same effect on many a viewer. Unfortunately, it would appear that Nick won’t be making rounds at Grey Sloan anytime soon.

So be it. We still want a grand new love affair for Meredith, and have all the faith in the world that Grey’s kickass casting department will be able to find a suitable Speedman stand-in. Who agrees that it’s finally time — really time — for Mer to fall hard again? And who could you picture as her leading man? Hit the comments.