If you thought Nashville was going to let one of its central characters glide into the series finale with a happy ending already in place… what show have you been watching all these years?

Gideon’s assurances that he hasn’t had a drink in decades were shaky enough after Daphne found an empty bottle under his bed in last week’s episode. But they lose all credence at the end of this week’s, when Deacon confirms that his dad fell off the wagon and attempted to hide it.

It’s a blow to their newly patched-together relationship, which wasn’t on very sturdy ground to start with. And it’s not necessarily the kind of transgression that Deke will be willing to forgive in time for next week’s series finale.

Elsewhere in Music City, Steve Earle gives Gunnar tips on living his best musical life, Avery and Juliette have a medical scare and Sean’s wife tries to gift him to Scarlett like a puppy with a bow tied around its furry little neck.

Read on for the highlights of “I Don’t Want to Lose You Yet.” 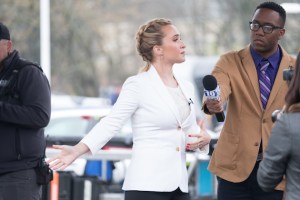 JU DROPS THE MIC | A crowd of reporters have set up on Juliette’s lawn in response to the she said/cult said story. While she watches them with a concerned look on her face, Ju notices that Cadence’s forehead is a little warm. “You feelin’ all right?” Mama Barnes says, and the tone of her voice (and the fact that she is on a primetime soap) cause me to write this in my notes: IF YOU MAKE THE KID TERMINALLY SICK, I WILL END YOU. Related: I’m not sure whom, exactly, I will end, but the sentiment is true.)

Later, during a hangout with Hallie, Juliette confesses that she’s pregnant. Hallie urges her friend to tell Avery, but Juliette says no, because he’d immediately return to her side “but that doesn’t mean he could ever love me again.”

Despite her sadness over Avery, Juliette presses forward with a press conference held in front of The Movement for Coherent Philosophy’s headquarters. Rosa and her son are there to lend credence to Ju’s claims, and Ms. Barnes decrees that she will continue to dog the cult until it stops being evil. “Darius, wherever you are, you can’t hide from me,” she says into the cameras. “I will never stop fighting until justice prevails.” Oh, and one more thing: Juliette announces she’s retiring from the music business and dropping out of public life. Kthanxbye! 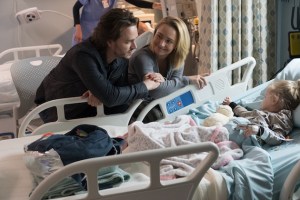 MEDICAL DRAMA | That evening, Cadence is definitely running a temperature. When Ju calls, Avery comes over to see what’s up. He mentions that he saw the press conference and he’s surprised by her plans to eschew fame. Juliette mentions that she bought a farm outside of Nashville and that’s a big part of her dream… and Cadence’s fever reaches 104, and all conversation is tabled as they bundle her up in a blanket and rush her to the hospital.

Ju and Avery rush their kid into the emergency room as though her leg got bitten off by a crocodile or something. I totally understand being freaked out when your child is sick, and 104 is a very high fever, but maybe pour on some chill so the toddler doesn’t start losing her stuff, ok? The diagnosis: pneumonia and dehydration, which is a huge relief to both parents as they cuddle by Cadence’s bedside. “Why is it when you smile at me that way, all the pain disappears?” Avery asks his ex-wife… who still doesn’t think it’s time to tell him about the little Barkley brewing in her belly.

THE SAGE ON THE STAGE | Gunnar is having a creative dry spell, so Will tries to cheer him up by getting him a ticket to Steve Earle’s show at The Bluebird. (Side note: Will’s comment about Fleetwood Mac all sleeping together and that hug that he holds too long are making me even sadder that the show never explored an attraction between him and Gunnar. What? It could have worked, people!)

Earle superfan Gunnar happily attends and is psyched when the musical legend sees him in the crowd and asks to meet him afterward. When Gunnar details his current problems writing and performing, Earle suggests “Try not being Gunnar Scott for a change.” Two things: 1) In a show where, at one point or another, almost every character has been advised to just be themselves in order to better their situation/stay true to their art, Gunny is told to do the exact opposite; and 2) If this is leading to a Chris Gaines-type situation, I AM HERE FOR IT.

TWIG SNAPS | Twig calls to apologize to Maddie, who’s still not over the fact that he was lying for Jonah the whole time she dated the pop star. Her rebuke leads Twig to reconsider his life, which manifests as him refusing to go on the European tour and quitting as Jonah’s… entourage member #1? I don’t even know. “I think I’m done being your bitch,” he tells Bieber Jonah, which leads the pop star to call Twig a loser. Nice. Later, Twig finds Maddie to tell her what happened, and they kiss.

WHAT’S YOUR DEAL, GIRL? | Avery and Alannah meet for the 400th time to have a conversation where he promises that they’ll work out and she says they’re doomed. Then, she and Brad meet up and have strangely flirty banter in which he talks about them falling for each other but admits “I cannot figure you out.” That makes two of us, Brad. The next day, Alannah has an intriguing coffee date with Deacon (we’re not privy to most of what’s discussed). 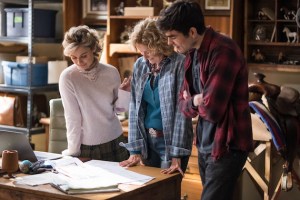 FOR WHOSE BENEFIT? | When Scarlett learns the therapy ranch is going to have to close because it’s behind on payments, she immediately starts planning a benefit concert to save the place. Sean agrees to perform, and, oh dear, looks like his wife Angela is now a card-carrying member of the Sunshine Does, Indeed, Shine Out of Scarlett O’Connor’s Behind Society. “You just waltzed right in, and suddenly, now he has something to live for,” Angela tells her. Instead of being mad about it, Sean’s wife seems resigned. “Sometimes, I think he’d be better off with you,” she says, a notion which Scarlett soundly rejects.

Know who doesn’t reject that idea? Sean, who has a MEANINGFUL performance with Scar at the benefit, then declares his admiration backstage. “You broke into my heart like some kind of wild angel. You busted open the doors,” he says, which is rather poetic for a man who barely strung together three-word sentences when we first met him, no? Scarlett gently but firmly shuts him down, saying that she’s just a novelty that seems better because he hasn’t seen her at her worst. Meanwhile, Angela is “the one who kept you alive,” Scar points out, adding that he’d better run after his wife if he’s going to have any shot at keeping their family together. He kisses her, and she doesn’t pull away, then adds, “I’ll never forget you” before running after Angela. Scarlett cries a little. Also, WOW way to treat your wife, who has been through hell with you, like a consolation prize, dude.

On stage, Gunnar debuts his new stage self… which looks a lot like his old stage self, except wearing a ripped vest and about 15 percent more hair product. He plays an electric guitar, which is new for him, and sings a song called (wait for it) “Goin’ Electric.” Will is on backup, the song is about 30 seconds long and I’m fairly certain Gunny cut loose harder and better during Dangerous Brother Jason’s arc in Season 1. But still, I’m proud of you, you little bleached-tipped toaster! 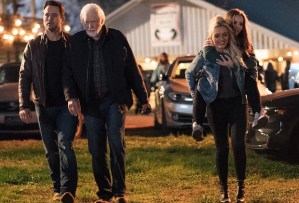 UNDER THE INFLUENCE | Deacon, Gideon, Maddie and Daphne attend the benefit, too. But afterwards, Daphne doesn’t want to ride with her grandfather but won’t say why. What we know but Deke does not: Daph caught her grandpa out of sorts with an empty bourbon bottle earlier, and he asked her not to tell her dad.

With a furious, knowing look on his face, Deacon grabs the keys from his father and searches the car, uncovering a full bottle of booze. He hurls it away, starting to cry very angry tears. “I knew it. I knew you were lying to me,” Deacon says, ordering his dad to get out of his sight and seemingly severing their tenuous ties: “You’re not my father.”