Nashville‘s Darius finally drops the nice-guru act in this week’s episode, and though there are far bigger questions that need resolution before the show’s impending finale — will Juliette and Avery get back together? Is Emily harboring secret resentment about being Cadence’s glorified nanny? How does Gunnar get his hair so high? — it’s refreshing to see some of Ms. Barnes’ pluck return as she guns to take down her former emotional mentor.

Sigh. Two episodes left after this one, y’all. Can you believe it?

Read on for the highlights of “For the Sake of the Song.”

GIDEON’S SECRET | Daphne has turned into the breakout It Girl of Nashville’s Next Country Star, which makes everyone in her family happy. Gideon starts reminiscing about how he taught Deacon how to play guitar, but Deke bristles at the whitewashed memory: As he recalls it, there was a lot of yelling, drinking and throwing of lit cigarettes involved in the instruction.

When Deacon is back at his old place to fix the sink, he remarks on how Gideon has started disappearing for long stretches of the day. Scarlett thinks maybe her grandfather is drinking again — and honestly, I’m surprised Deacon hasn’t leapt to that conclusion himself by this point. Newly suspicious, Deke trails Gideon the next day… and finds him playing music with some old friends in one of the guys’ garages.

After he gets caught playing spy, the guys invite him to stay and watch. Deacon is almost overcome by Gideon’s rendition of a sweet waltz; with tears in his eyes, he beats a hasty retreat back to the house. That night, he confronts his father about his polished version of their shared history. “You did everything you could to take away my music,” Deke yells, and he only gets angrier when Gideon counters that he only pushed his son to do better out of love. “The only think your love ever gave me was a habit that ruined my life… You do not get to take credit for my music. It is mine.” 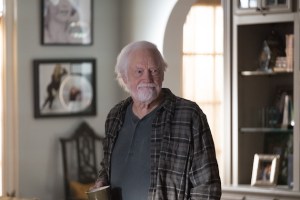 Later, the older man reminds Deacon that his own father drank and beat him, and adds that he’s proud of Deke for breaking the cycle. “We were both victims of circumstance, but you rose above it,” he says. Still, acknowledging how raw his son’s feelings are, Gideon says he’ll sit out Deacon’s appearance at a Bluebird Café songwriters circle that evening.

But when Scarlett learns that Gideon isn’t there, she secretly gets him to attend, so he’s in the audience when Deacon tells the audience that his favorite song was the song his dad first taught him, “Little Bitty Ditty.” And as Deke strums, he has good memories of Gideon teaching him the tune. By the end of the episode, they’re playing together and laughing in Deke’s home studio.

And that’s why it’s such a gut-punch when Daphne, who’s in Gideon’s room dropping off clean laundry, finds an empty bourbon bottle under the bed. 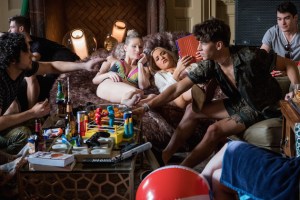 THE CASE OF THE EX | Jonah’s ex, Mia, crashes a pajama party he throws at his house, and Twig is tasked with distracting Maddie long enough for the pop star to get his old girlfriend to leave. But when Twig’s love for Mads/guilty conscience gets the better of him, he confesses what’s really going on, leading to Maddie finding Jonah making out in the laundry room with Mia. Maddie leaves in tears, probably not thinking much about how she and Twig were thisclose to kissing before he told her the truth.

YOU MESS WITH THE BARNES, YOU GET THE HORNS | When Juliette arrives for a meeting with Darius… wait, hold up. Juliette, why are you entering the literal headquarters of the cult that locked you away from your family, and you’re doing so alone?! Without Glenn or your lawyers or, heck, Hallie to witness what’s going on? Oy. Even Darius knows that’s stupid, which is why he has Laura in the room to “document” the visit.

At first, Darius is his usual, avuncular self, apologizing that his team in Bolivia was “concerned but overly cautious” and that’s why they treated Juliette like a prisoner. “Don’t give me that crap,” Ju replies. “Your team does only what you say.” She adds that she wants justice for “people who fell for your charade, people like me.” And that’s when Laura scurries from the room and Darius shows his true self for the first time.

In very menacing fashion, the Movement for Coherent Philosophy head reminds her that she signed a non-disclosure agreement the moment she left for the South American country, and if she speaks to the press about what happened, “the movement will sue you for every penny you’re worth,” he details. “You will have nothing. Your family will have nothing. So yes, it’s over.”

It seems like a win… until Inside Edition runs a story about Juliette demanding special treatment and lashing out verbally and physically while she was away. 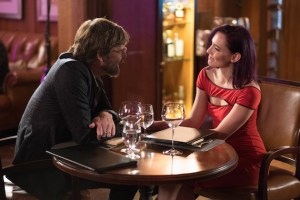 WHO’S ZOOMIN’ WHO? | Alannah starts to realize that Jessie’s warnings about Brad were really well founded — she even learns that he’s paid settlements to six former employees — but she still starts acting all coquettish around him and I seriously don’t know if she’s playing him or struggling to understand where the boundaries are or what but guess what, girl? Your storyline is getting the two-sentence treatment this week.