Despite the fact that The Movement for Coherent Philosophy is a manipulative cult that detains people against their will, I’ll say this for it: It seems to have had at least some positive influence in the life of Ms. Juliette Barnes.

The Juliette that returned to Music City in last week’s Nashville is calm. She’s centered. She’s sad, of course — after all, it’s hard to stay chipper after watching the love of your life macking on Tinky Winky — but she’s reasonable. And, as we learn in this week’s episode, she’s pretty resigned to the fact that Avery is most likely done with her for good.

And would Ju have been able to achieve this inner equilibrium without the assistance of Darius’ sham psychology therapy? Maybe not, she admits to Hallie during this week’s episode. “How can something be so helpful and so harmful at the same time?” she asks.

While I’m having a very hard time accepting the way Juliette and Avery handle her return in terms of how it affects Cadence, I’m happy they’re at least back in the same zip code. Where there’s even a flicker of love, there’s hope, right? And a fetus. Can’t forget about the fetus.

Read on for the highlights of “Strong Enough to Bend.”

I GOT A NEW ATTITUDE | Based on the fuchsia frottage she walked in on last week, I expect Juliette to go nuclear on Avery once Alannah climbs off. But she’s much less fiery than I expected her as she softly says, “I didn’t mean… It’s fine. I just needed to see the baby,” while her ex-husband chases his new lady toward the front door. There’s a very awkward meeting between the two women, then a highly spun-out Avery promises he’ll call Alannah in a little while. “You don’t have to,” she says. “I want to,” he maintains.

He finds Juliette staring at Cadence, asleep in her bed. “All the times my mama woke me up in the middle of the night just to say she was sorry,” she muses sadly, turning down Avery’s offer to rouse their kiddo. Exhausted, Juliette says she’ll stay somewhere else and sort things out with him the next day.

That’s how she ends up at Hallie’s, lamenting everything that’s happened. “Avery knew it was going to be a disaster. Why didn’t I?” Ju wonders. “Because they were helping you?” Hallie answers gently. But all the understanding in the world isn’t likely to change one awful reality: “Avery. I’ve lost him,” Juliette says, sounding rather final. 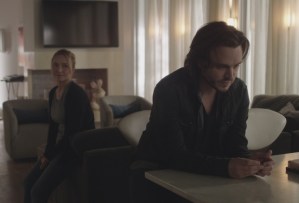 MUSICAL PARENTING | The next day, Avery watches as Juliette reunites with their daughter. (Side note: When Cadence kisses her mama on the lips, I DIE FROM THE CUTENESS.) What’s less cute: the conversation that the little girl’s folks have after she goes down for a nap. “I can’t do this anymore, following you around, picking up the pieces, waiting for the next disaster to happen,” Avery tells Juliette. “You really didn’t give me any choice.” She quietly agrees with him but doesn’t at any point mention their baby growing in her uterus; if I had to guess, I’d say it’s because this newly enlightened Juliette wants him to stay with her out of love, not obligation. Which is noble and all, but we only have a handful of episodes left, kids! Get to reuniting!

After Alannah is Distant and Unreachable Emo Girl for a while, she finally tells Avery that “I can’t be the one that breaks up your family.” He counters very definitely that “I’m not taking her back.” Later, as Avery moves out of the house, Juliette pleads with him to “Please keep talking to me.” He says he’ll try. And here’s the part where I wonder why Avery, who is so concerned about the effect Juliette’s absence has had on their daughter, is so quick to decamp once she’s back. Has this child ever had both of her parents in the same home for more than a few weeks at a time? 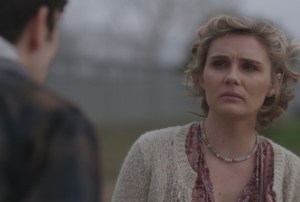 A VOICE OF REASON | “Get professional help, or I’m out,” Scarlett tells Sean, and because she’s come to her senses a bit, she is allotted more than one sentence in this week’s recap. Let’s back up. After a call from Sean’s wife, Scarlett forces him to go to the Veterans’ Administration Hospital with her to try and get some help for his PTSD. But after waiting for hours without seeing anyone, he balks, spitting “I’m not your project” at Scar. He later stops by her house and apologizes, pointing out that she has taken such an interest in him because of his musical background, and clearly, “The person who needs to be back on stage is you.” She scoffs, but by the end of the hour, she’s jotting a few things down in her notebook of lyrics.

GRANDPA GOES A STEP TOO FAR | Despite inviting Gideon to stay with him and his family, Deacon bristles at his dad’s jovial manner with Daphne and Maddie. And Deke loses his damn mind when Gideon suggests that some of the younger man’s memories of his abusive behavior don’t exactly line up with the truth. After an admittedly scary explosion at Gideon while Daph is around, Deke swings by an Alcoholics Anonymous meeting to confess that his anger at his father is like his “armor.” He tells the group, “People that he hurt aren’t here to speak now. If I forgive him, then there’s no one left to be witness to what he’s done to them… and to me.” But he also tearfully acknowledges that if he doesn’t let go of his hatred, “then I’m the broken one.”

Also of note in Deacon’s world: He and Jessie run into each other in the grocery store and do that thing where they offer thanks for what each did for the other. Then she kisses him and they part. Oh, and Brad seems to have dropped the custody suit, so mission accomplished, right?

Later, at the house, Deacon tells his dad that he’s “trying.” Gideon understands. “I appreciate that, son,” he says. 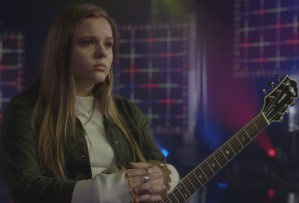 A STAR IS FORLORN | Brad tells Daphne her Nashville’s Next Star vote totals are dropping and suspects it’s because she’s “hiding” behind her guitar during performances. He tasks Ilse, her coach, with helping her connect with an audience. Daphne freaks out, walks out of rehearsal and skips the next one before realizing that Ilse doesn’t mean “be sexy” she just means “be human.” So at the next show’s taping, Daph puts down her instrument before performing a great tune called “Without Warning,” essentially doing exactly what Brad asked. It’s a hit with the audience.